The Science Behind GMOs

As we celebrate the International Day of Women and Girls in Science on the 11th of February, we take you through the science behind GMOs and modern agriculture, in an effort to demystify the process and correct some misinformation about the technology.

How We Got Here: The Science Behind Genetic Modification in Crops

Farmers have grown commercial GM crops for about 25 years, but genetic modification in crops is much older. Farmers have been intentionally changing the genetic makeup of all domesticated crops for about 10,000 years. Every fruit, vegetable and grain that is commercially available today has been altered by human hands, including organic and heirloom seeds.

Then, in the late 20th century, advances in technology enabled us to expand the genetic diversity of crops through genetic engineering; a major result of this was GM seeds. Kent Bradford, director of the University of California, Davis Seed Biotechnology Center explains, "From the scientists’ point of view, [genetic engineering] was just an obvious extension of breeding and crop improvement methods that they were excited to utilize."

CropLife International's "Seed Story" takes us on a journey about seeds, from very early breeding methods and adaptations to today's technologically sophisticated seed research and development. Check out this interactive infographic to follow the story of plant biotechnology in agriculture. This infographic also explains the many breeding techniques utilized to develop seeds for modern agriculture, including selective breeding, advanced breeding and GM plant breeding. 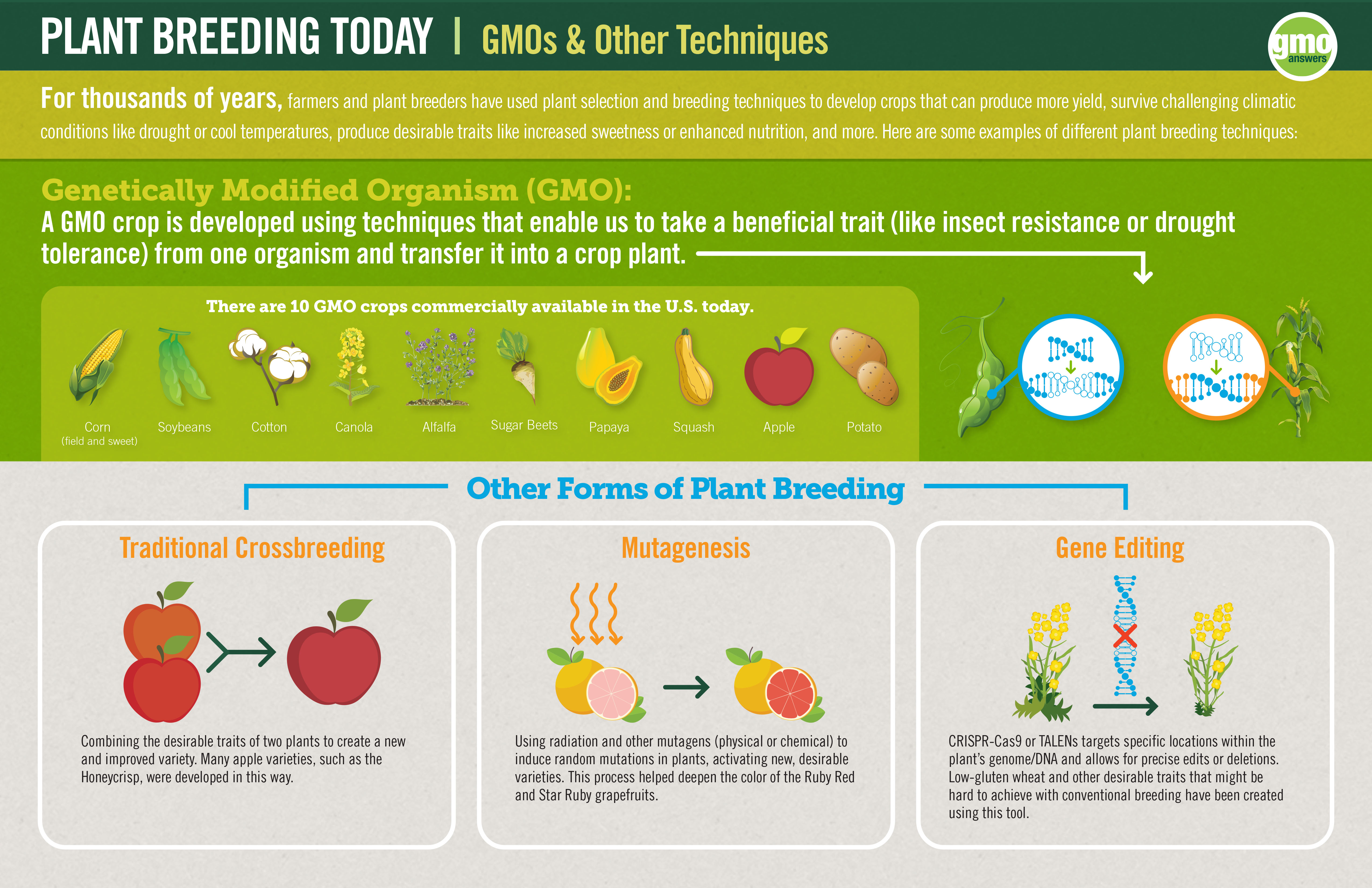 What's the difference between genetic engineering and other plant breeding methods?

While genetic engineering is the latest technique used in the long evolution of plant breeding, it differs from other techniques by enabling specific, predictable changes to be made to a plant.

In this video, Kevin Folta, professor and chair of the University of Florida Horticultural Sciences Department explains the differences between various types of breeding methods.

He explains, "...cross-pollination, which just occurs naturally between sexually compatible plants, cross-breeding, which is a human-facilitated process by which humans do this, and GMO technology, where in a laboratory we’re able to move one trait with precision to confer some new quality or some new trait onto a plant product."

Curious about what different types of breeding look like? This infographic from the U.S. Food and Drug Administration uses segments of DNA to demonstrate how genetic engineering compares to traditional breeding. How do we use science to ensure that GMOs are safe for use and consumption?

Before they reach the market, crops from GM seeds are studied extensively to make sure they are safe for people, animals and the environment. Today’s GM products are the most researched and tested agricultural products in history. Learn more by checking out this infographic that explains how a GMO gets to market.

What do the GMOs of the future look like?

GM technology can help provide plant solutions for many types of real-world problems. For example, a GM tobacco has been used to develop a treatment for the Ebola virus. GM citrus could help fight citrus greening, a plant disease that is devastating the citrus industry. A research center is developing BioCassava Plus - more nutritious, higher-yielding, and more marketable cultivars of cassava, a staple crop consumed by more than 700 million people worldwide. We may also be able to restore a near-extinct plant species in genetically modifying the American chestnut tree to withstand the blight that has nearly wiped out this iconic hardwood tree. Herbicide and insect resistance might be the most well-known applications for genetic engineering right now, but the technology has endless potential applications for human and environmental benefit.