How Do GMOs Affect The Environment?

Despite negative myths, there are many reasons why GMOs are good for the environment. Firstly, did you know that genetically modified crops can actually reduce the environmental impact of farming? And that GMOs can have other environmental benefits as well, such as helping to reduce food waste and improve air quality?

In honor of World Environment Day and Earth Day, we’ve included this video to celebrate all the ways GMOs give back to our people and our planet:

Below, we cover some more reasons why GMOs are good for the environment.

GMOs and the Environment: Reduced Inputs

Reduced inputs are one of the biggest environmental benefits of GMOs. A major advantage for over 18 million farmers globally who plant GMOs is the ability to successfully grow crops with fewer inputs, including reduced pesticide applications and the fuel needed to operate tractors to till the soil. Over the last 20 years, GMOs have reduced pesticide applications by 8.6% and helped increase crop yields by 22%. GM crop technology has improved yields through improved control of pests and weeds. As a result, farmers who grow GM crops have reduced the environmental impact associated with their crop protection practices by 19 percent.

By making targeted improvements to crops through genetic engineering, farmers can produce more food for a growing world population while reducing agriculture’s impact on the environment.

GMOs and the Environment: Increased Efficiency 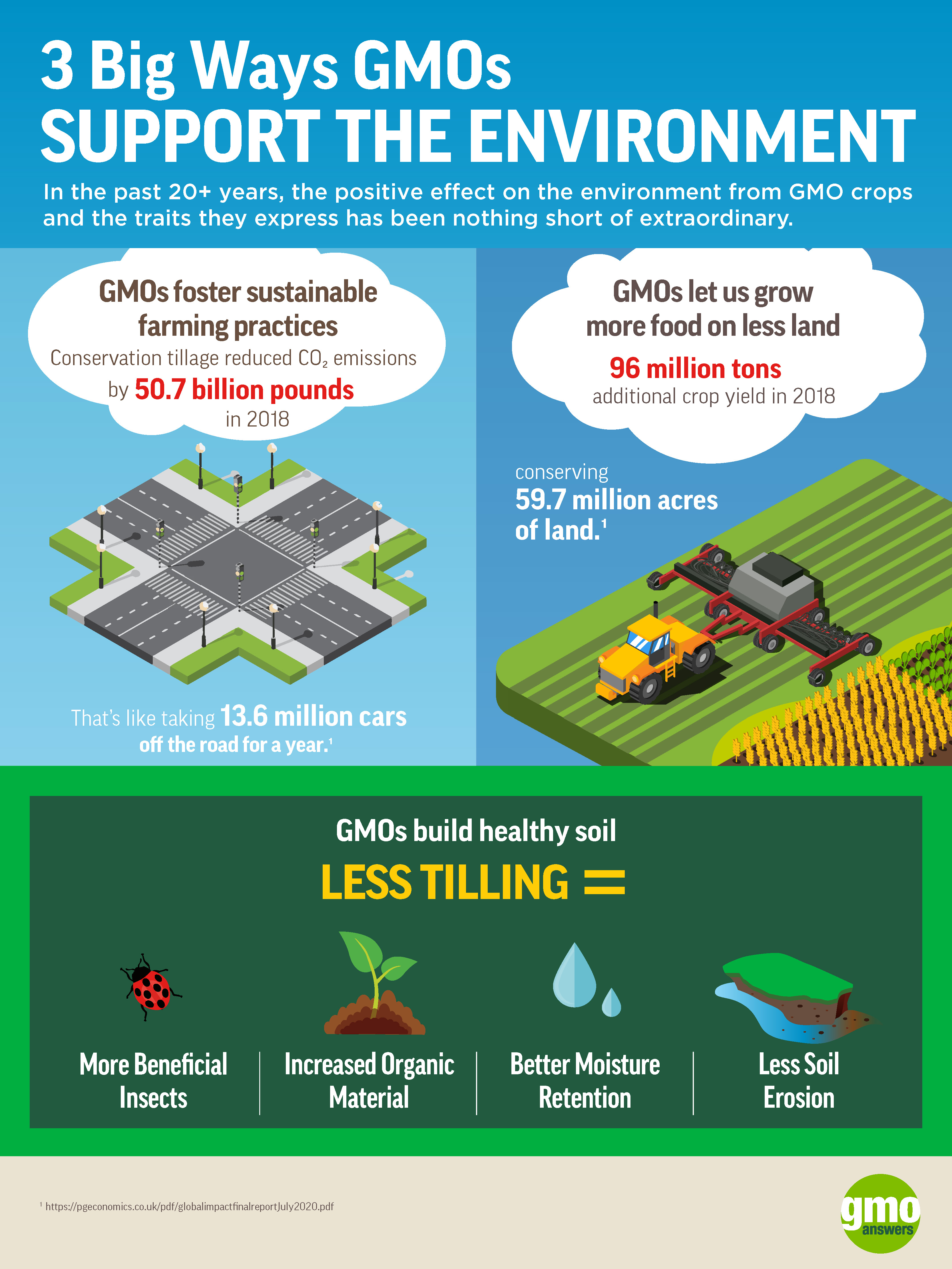 Another way in which GMOs help the environment is by allowing farmers to grow more crops using less land. Genetically modified traits such as insect and disease resistance and drought tolerance help to maximize yield by minimizing crop loss to pests, diseases, and adverse weather conditions. Between 1996 and 2018, crop biotechnology was responsible for an additional 306 million tons of soybeans, 549 million tons of corn, 36 million tons of cotton lint and 15 million tons of canola, without having to bring more land into production. To produce the same amount of crops without GM technology, farmers would have needed to cultivate 59 million additional acres of land, so in this case, the environmental impact of genetically modified crops is hugely positive.

In addition, PG Economics notes that the fuel savings associated with making fewer spray runs (relative to conventional crops) and the switch to conservation tillage, reduced and no-till farming systems, have resulted in permanent savings in carbon dioxide emissions.

Are GMOs Safe for the Environment?

Crops from genetically modified seeds are studied extensively around the world to make sure the environmental effects of GMOs are safe before they reach the market. GM plants are tested, and researchers look for any differences between the GM plant and conventional plants to make sure the GM variety grows the same as the non-GMO variety. They’re also tested to make sure that they demonstrate the desired characteristics, such as insect resistance.

The health and safety of GMOs have been validated by many independent scientists and organizations around the world. Groups ranging from the World Health Organization, the Royal Society of Medicine (UK), the European Food Safety Authority (EFSA), and the International Seed Federation (ISF), along with various governing bodies on every continent around the world have all affirmed the safety of GMO crops. Since 1992, more than 40 government agencies have given approvals for GMO food, feed, and cultivation. In many countries, multiple agencies are involved in the regulation of GMOs.

The Affects of GMOs on Beneficial Insects

The United States Environmental Protection Agency (EPA) conducts a mandatory review of genetically modified plants that are resistant to pests and diseases to assess the environmental risks of GMOs and their impact on beneficial insects like honey bees or ladybugs. EPA also reviews and establishes tolerance levels for herbicides associated with herbicide-tolerant crops.

Many have claimed that certain GMO crops harm pollinators, however, there is currently no evidence that GMOs have caused a decline in bees or other pollinators. Extensive field experience with commercial herbicide tolerant or insect resistant GM crops has shown no deleterious effects. In fact, reduced pesticide use associated with insect resistant GM crops and reduced tillage that is possible with herbicide tolerant crops are believed to be beneficial to bee populations and other pollinators. Learn more about the effects of GMOs on pollinators.