Are GMOs Safe To Eat?

A common question often asked of GMOs is ‘are genetically modified foods safe’? The answer is yes, GMOs are safe to eat. That is the overwhelming consensus of scientific experts and major scientific authorities around the world, including the World Health Organization, United Nations Food and Agriculture Organization and the American Medical Association who have all researched heavily into GMO safety.

In the spring of 2016, The National Academies of Science, Engineering and Medicine (NAS) issued a comprehensive report which answered the question: are GMOs safe? A panel of more than 20 scientists, researchers, agricultural and industry experts reviewed over 20 years of data since GMOs were introduced, including nearly 900 studies and tests and European and North American health data. They concluded – as other previous research concluded – that GMOs are safe to eat.

The researchers found that GMOs have the same nutrition and composition as non-genetically modified crops and have no links to new allergies, cancer, celiac or other diseases. So, are GMOs unhealthy? No more than their non-GMO equivalents.

Extensive and continued GMO safety studies are being conducted to ensure GMO foods are safe. In addition to the NAS analysis, there are thousands of studies available confirming the safety of GMOs, as well as hundreds of independent studies that explain why GMOs are safe.

How safe are GMOs?

Another very common question is how safe are GMOs? The answer is simple: they’re very safe. Genetically modified seeds go through an exhaustive research and review process to ensure GMO food safety before they come to market. On average, GMOs take 13 years and cost $130 million for research, development and regulatory approval. On average, more than 75 different studies are performed to ensure that GMOs are safe for people, animals and the environment. This data is reviewed by up to three regulatory agencies in the U.S. – the USDA, the EPA and the FDA.The GM plant must be approved by these agencies before it can be commercialized. Globally, more than 75 countries review, approve and import GMOs, and/or use GMOs in field trials. 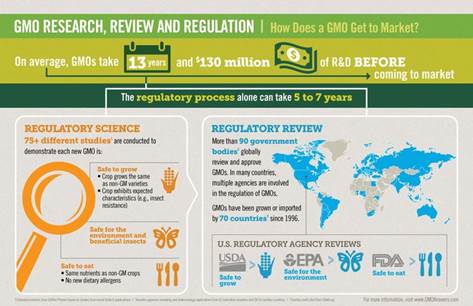 Robert Wager, Faculty in the Biology Department at Vancouver Island University, provided details about the testing in his response to another question on GMO Answers. Here is an excerpt:

“Most people are not aware of the extensive pre-market testing on the safety of GMOs that must be done before any GE crop is allowed to be commercialized. In reality, GE crops are tested 10-50 times the level of non-GE crops to ensure that GMOs are safe to eat. The testing examines potential hazards and the likelihood of exposure to determine the overall risks for GE crops and derived foods."