The Environmental Benefits of GMOs

Lower carbon emissions. Healthier soil. More food on less land. Less food waste. All of this without sacrificing nutritional quality or the health and safety of people or the planet – and sometimes even enhancing it. Yes, we’re talking about GMOs.

When you think about the benefits of GMOs, do you think of great big strawberries or seedless watermelons? Most people do. Surprisingly, neither of those things have anything to do with GMOs.

Environmental sustainability is critical to all methods of agricultural production–conventional, organic and genetically modified – and each GMO crop exists to address specific challenges farmers face in feeding and fueling a growing world, including tackling environmental issues. In the past 25+ years, the positive effect on the environment from GMO crops and the traits they express has been nothing short of extraordinary.1

GMO seeds are one of the tools that farmers use to grow the crops we need to feed the world while leaving enough land for people to live on. Because GMO crops directly combat critical challenges like pests, weather, disease, and food waste, farmers are able to achieve better harvests using less land. In 2020 alone, growing the same amount of crops globally without the use of GM seeds would have required 23.4 million more hectares/57.8 million more acres of land.2 For context, that’s larger than the state of Idaho! 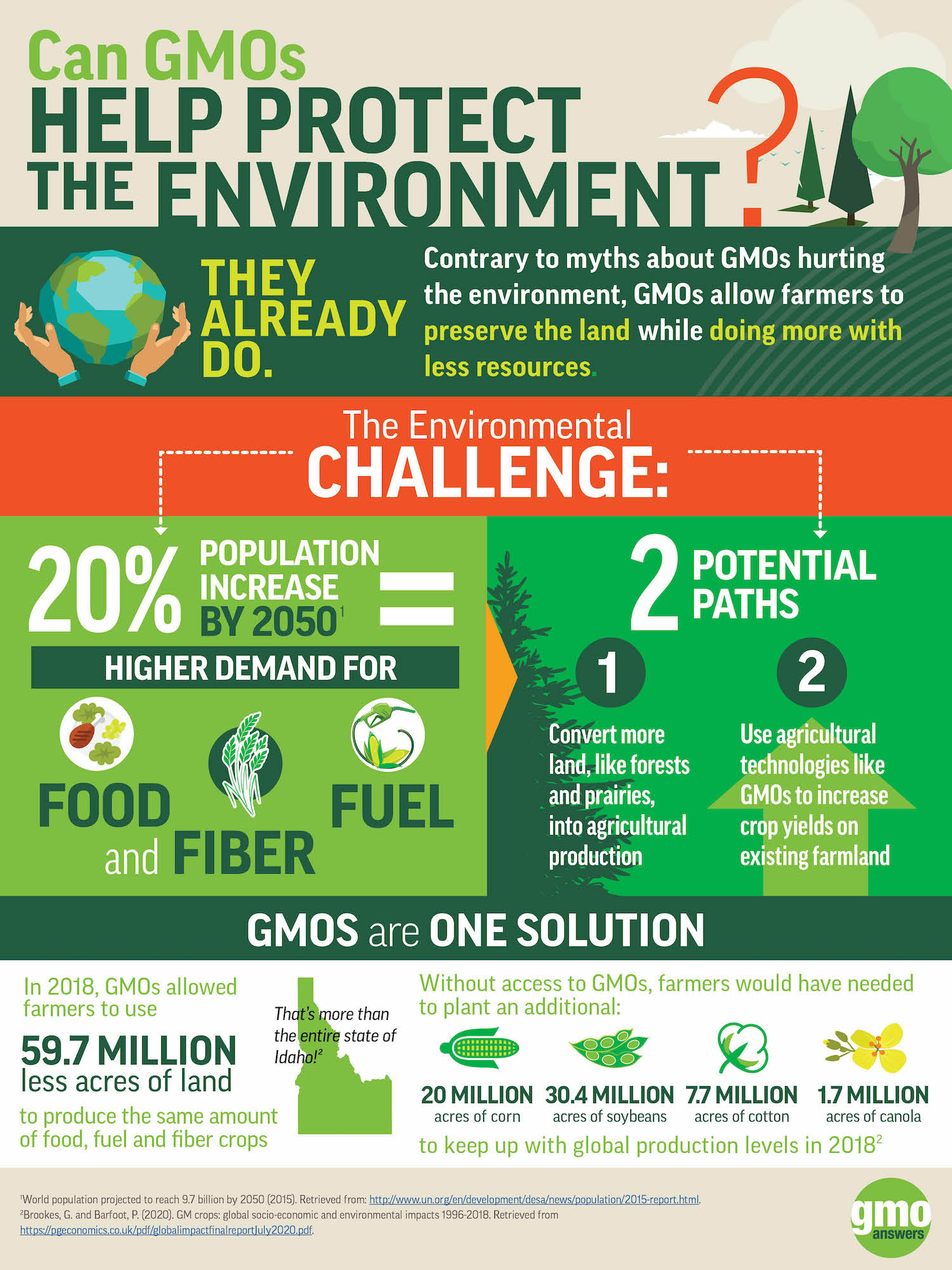 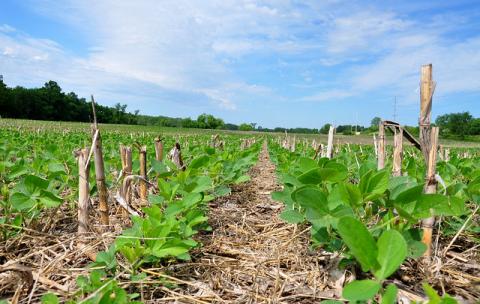 These benefits add up: In 2020 alone, the GM crop-related CO2 emission savings from reduced fuel use and additional soil carbon sequestration were equal to the removal of 15.6 million cars from the road3 - two million more than all the cars registered in California!4

Each additional hectare/2.47 acres of land converted to no-till has a CO2 impact equivalent of erasing the carbon emissions from a drive from Boston to Philadelphia.5 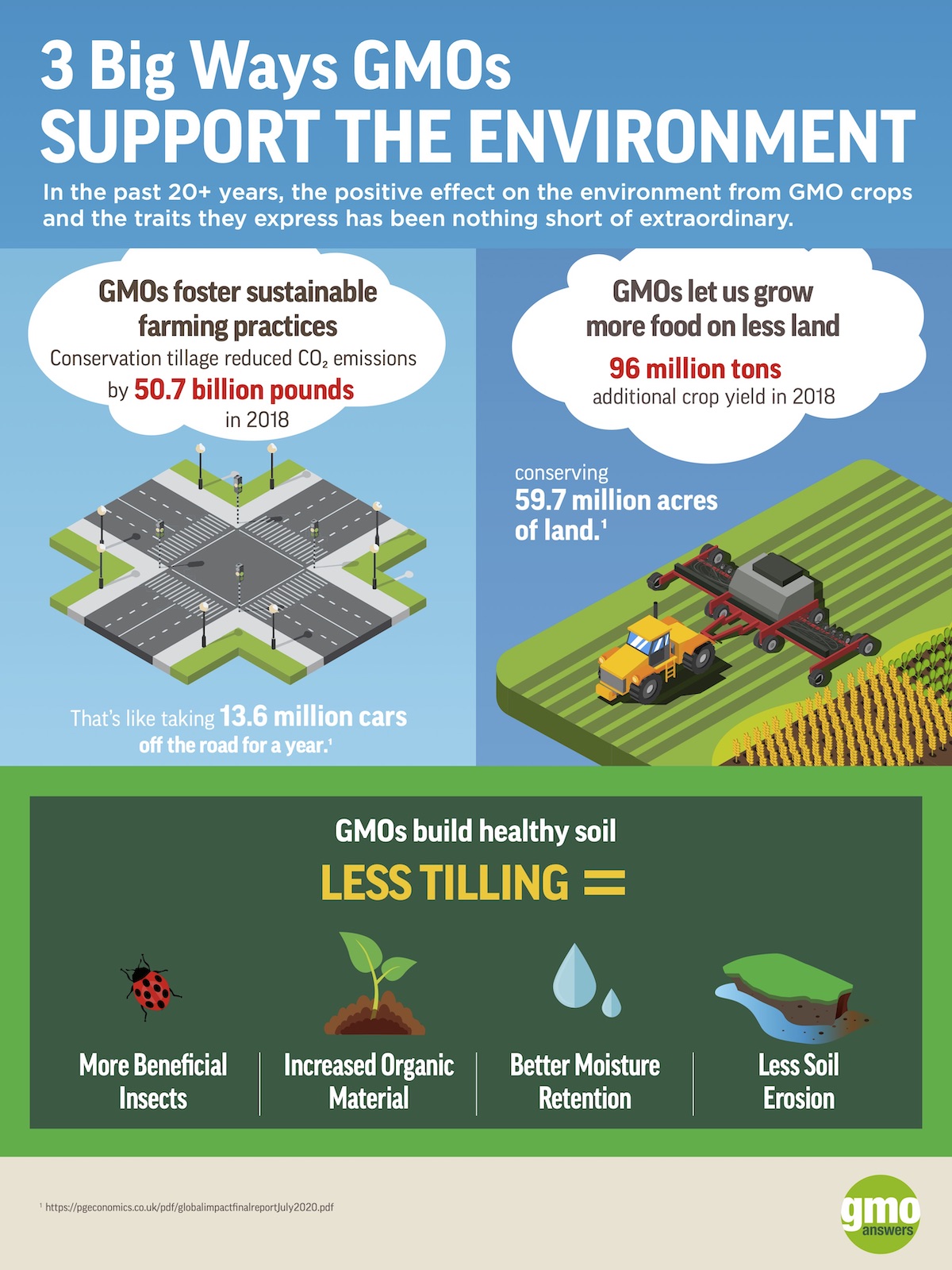 GMO crops have contributed to reducing the overall environmental impact of pesticides by 17.3%.6

Herbicide-tolerant (HT) crops allow farmers to treat fields with pesticides – often glyphosate—instead of tilling, and reduce treatments. Glyphosate is environmentally benign and manages many weed species at once, which makes it a desirable pesticide among farmers. This means that rather than applying different herbicides multiple times throughout the season, farmers can apply a smaller number of herbicides fewer times – much like using one broad-spectrum sunscreen instead of applying both UVA and UVB. 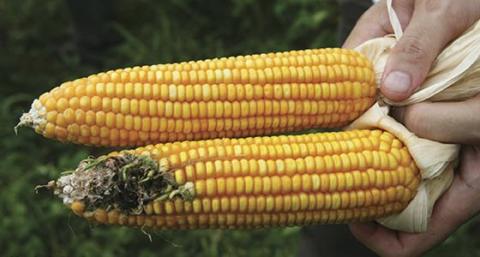 Insect-resistant (IR) crops produce the Bacillus thuringiensis protein (Bt) that is commonly found in nature (and approved for use in all agriculture, even organic) which kills target pests by interacting with a specific cell receptor found in their guts. This receptor doesn’t exist in the guts of humans, other animals nor most insects. This means that when a pest like the European Corn Borer starts munching on a stalk of Bt corn, it dies, but humans are unaffected. Therefore, fewer insecticides need to be applied to ward off these target pests! That’s why 82% of corn and 88% of cotton grown in the U.S. is genetically modified for insect resistance.7

The benefits of HT crops to water, soil, and air are all dots that connect. Because farmers till less often, the soil stores more carbon and we emit fewer greenhouse gases (GHG). But reducing the amount of tilling also means that there is less soil erosion – when farmland is exposed to wind and water, the soil is stronger and stays in the fields, and so do any inputs used (like pesticides), keeping them out of our lakes and rivers. With more beneficial insects in the soil along with the remains of the field’s previous crops, the amount of organic material in soil increases, allowing the soil to retain more moisture. The organic matter and moisture that remains in the soil help crops better withstand periods of drought or heavy rainfall.

Read more about the environmental benefits of GMOs in the following links:

Many Uses of GMOs - Sustainable Fashion 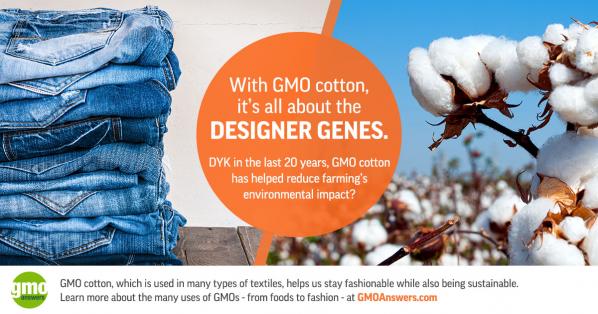 Many Uses of GMOs - Sustainable Fashion

How Do GMOs Help Preserve H2O? 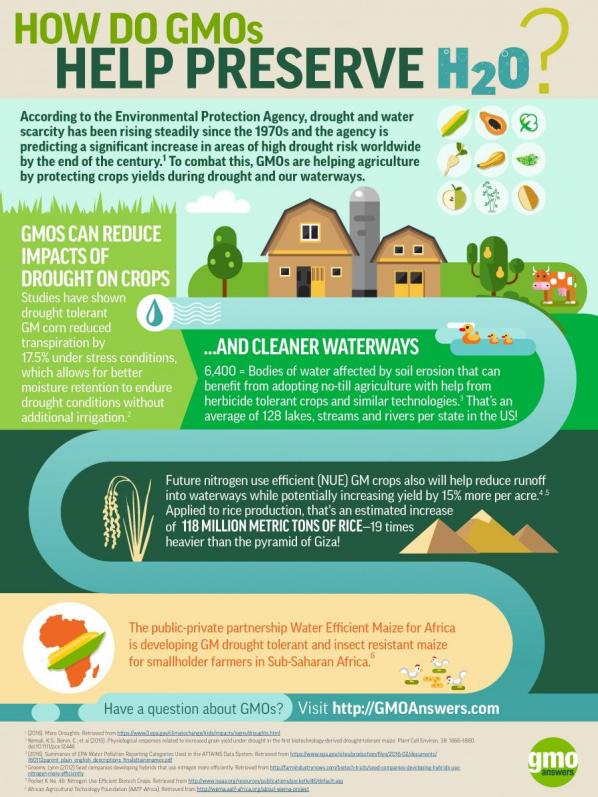 How Do GMOs Help Preserve H2O?

The significance, ethics, and impact of gmo on society