IARC Assessment of 2,4-D As a Possible Carcinogen

Today the International Agency for Research on Cancer (IARC) classified 2,4-D as "possibly carcinogenic" to humans (Group 2B); more on the announcement can be found here.

The announcement comes weeks after the IARC classified glyphosate as “probably carcinogenic” to humans (Group 2A). We discussed what IARC’s classification of glyphosate means for you in this post, and several experts offered their perspectives, including:

2,4-D is a commonly used herbicide that is approved for use by government regulatory agencies in over 90 countries.

Read more about 2,4-D as an agricultural herbicide in this overview previously posted to GMO Answers.

Beyond agriculture, 2,4-D is also used as a common household herbicide. 2,4-D, was invented by Dr. Franklin D. Jones, who was searching for a solution to eliminate the poison ivy plants his children were highly allergic to. To this day, the herbicide continues to be used by homeowners, lawn care professionals, and land management experts as a safe and affordable way to manage allergens and invasive and/or poisonous weeds. Learn more about the history of and uses for 2,4-D in this video from the 2,4-D Industry Task Force.

According to The National Pesticide Information Center, "2,4-D kills broadleaf weeds but not most grasses. 2,4-D kills plants by causing the A cell is the smallest unit of life. Each cell contains everything that it needs to function. Some organisms such as bacteria are made up of only one cell. Multicellular organisms such as plants and humans may have millions of cells.">cells in the tissues that carry water and nutrients to divide and grow without stopping. Herbicides that act this way are called auxin-type herbicides." Want to learn more about how 2,4-D works? Visit The National Pesticide Information Center for a comprehensive 2,4-D fact sheet.

As with all pesticide use, licensed pesticide applicators who apply herbicides like 2,4-D on farms are required to follow approved product labels and application procedures regulated by the U.S. Environmental Protection Agency and state departments of agriculture. Farmers undergo extensive training on the application of pesticides on their farms

, as Katie Pratt outlines in a recent post about 2,4-D:

My Farmer attends a class and takes a four-hour test every three years to be certified to purchase AND apply pesticides on our farm.  If he ever wanted to go into business and apply pesticides for other farmers, he would take an additional test.  This regulatory process comes to our farmers through the EPA and is issued and administrated by the state departments of agriculture. - read more

What benefits does 2,4-D offer?

Aside from being the most studied herbicide in modern history, 2,4-D offers a wide variety of benefits to famers, land management experts, and home owners who use it. 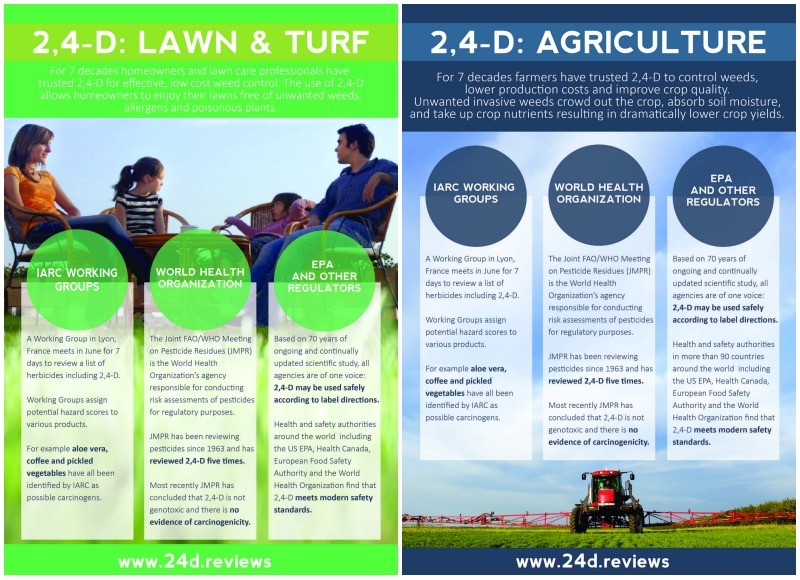 The International Agency for Research on Cancer (IARC) is the cancer agency of the World Health Organization. It is important to note that the body responsible for conducting risk assessments is the Joint FAO/WHO Meeting on Pesticide Residues (JMPR). Amanda Zaluckyj, farmer and blogger at TheFarmersDaughterUSA.com explains:

“One important piece of what IARC does is determine which substances in our environment have the potential for causing cancer. IARC does not conduct any original research; it only reviews studies and research already published to determine carcinogen status. You can read a little more about how they make these type of determinations here.” -  read more

As blogger & farmer Amanda Zaluckyj explained above, the IARC does not conduct any original research, but instead reviews existing research and studies to make its assessment. While the IARC reviews are private, the review process consists of the following steps:

There are five different types of classifications to which compounds can be assigned. Many products you will recognize already have been classified by IARC, including common household items  such as coffee, pickles, and glyphosate, and also sunlight, night shift work and more.

A complete list of IARC’s classifications (Volumes 1 – 112), is available here. 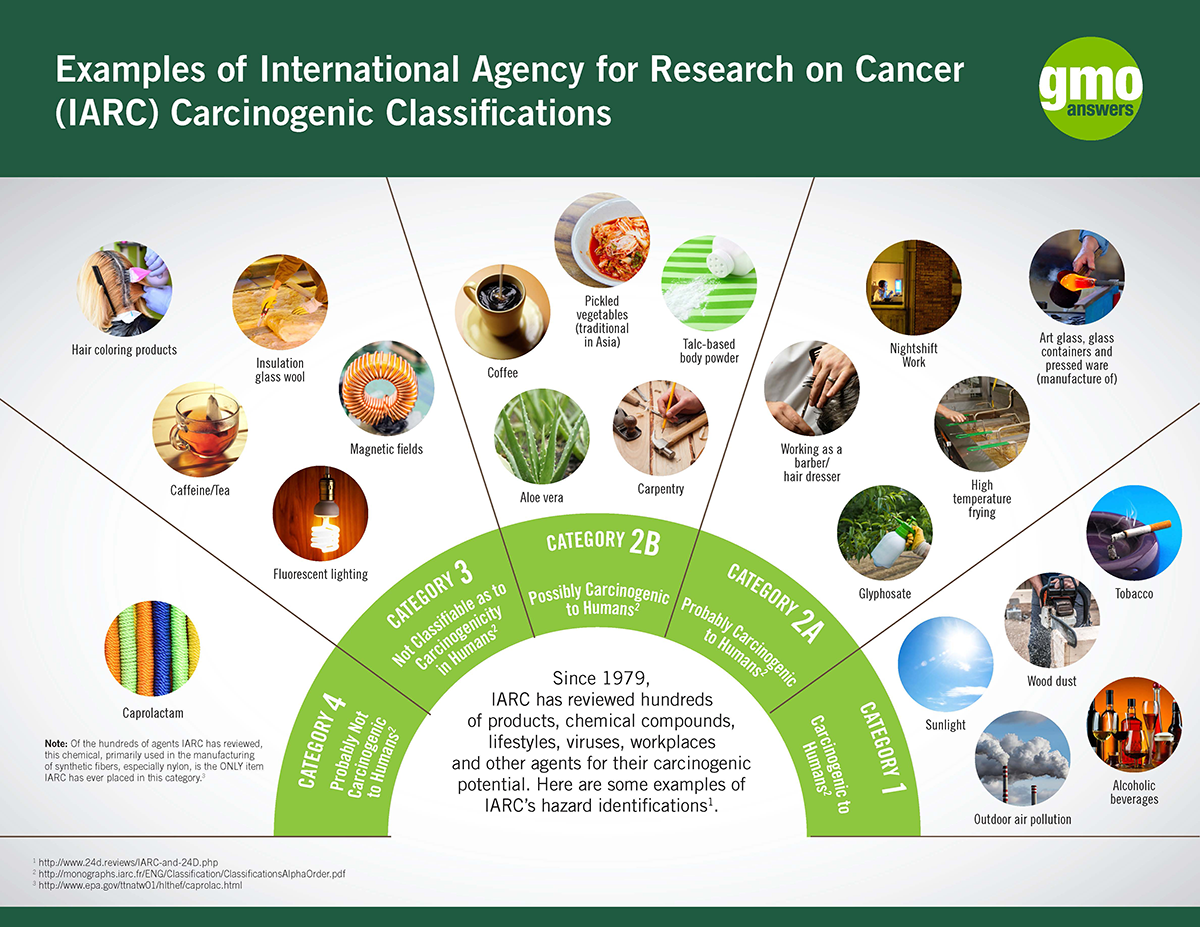 The American Cancer Society explains what carcinogens are:

“Substances and exposures that can lead to cancer are called carcinogens. Some carcinogens do not affect DNA directly, but lead to cancer in other ways. For example, they may cause cells to divide at a faster than normal rate, which could increase the chances that DNA changes will occur.” - read more

IARC ranks things based on their potential hazard, but as IARC Panel 112 Chair Aaron Blair explains:

We look at ‘could it potentially’ cause cancer, but we don’t look at whether it ‘will or is likely to’ cause cancer in real world use.

So what does IARC’s classification of 2,4-D mean?

Essentially, IARC's classification of 2,4-D as a “possible carcinogen” means that, just like coffee, aloe vera, and even carpentry, 2,4-D has been found by IARC to have the potential to cause cancer.

Does that mean it will cause cancer? Not necessarily. The Monographs Programme may identify cancer hazards even when risks are very low with known patterns of use or exposure.

The [IARC] lists themselves say nothing about how likely it is that an agent will cause cancer. Carcinogens do not cause cancer at all times, under all circumstances. Some may only be carcinogenic if a person is exposed in a certain way (for example, swallowing it as opposed to touching it). Some may only cause cancer in people who have a certain genetic makeup. Some of these agents may lead to cancer after only a very small exposure, while others might require intense exposure over many years. - read more

IARC itself goes on to explain that the Monographs Programme evaluates cancer hazards but not the risks associated with exposure. What’s the difference between a hazard and a risk? If an agent could be capable of causing cancer under some circumstances, it may be considered a hazard. Risk, however, measures the probability that it will cause cancer, and as Aaron Blair from IARC explains:

Whether these circumstances or exposures exist in the real world is a completely different question, one which the IARC has never attempted to answer

From the IARC preamble:

The distinction between hazard and risk is important

, and the Monographs identify cancer hazards even when risks are very low at current exposure levels, because new uses or unforeseen exposures could engender risks that are significantly higher

As Dr. Cami Ryan illustrates, the dose makes the poison.

If you have questions after reading this post about 2,4-D, or pesticides more generally, we invite you to submit them to GMO Answers.

Food Security and a Global Pandemic: What You Need to Know

Please, help me with phone number to contact, I am interested in GMO's, I want to buy the…

Lifecycle Of A GMO

Lifecycle Of A GMO