Are GMOs Causing a Decline in Bees?

There is no evidence that GMOs have caused the decline in bees or other pollinators.

The sudden and widespread disappearances of adult honey bees from hives, termed Colony Collapse Disorder (CCD), became a national concern more than 10 years ago.  Claims circulated that certain GMO crops harm bees. These assertions have been refuted by the mainstream scientific community.

According to the U.S. Department of Agriculture, CCD is a "syndrome defined as a dead colony with no adult bees or dead bee bodies but with a live queen and usually honey and immature bees still present."  Since the Colony Collapse Disorder crisis in 2006, a lot of attention has been focused on bee health, especially on honey bee health. The scientific community agrees that CCD is a complicated issue, with no single cause.  A variety of factors contribute to CCD, including parasites like Varroa mites, and lack of adequate nutrition.

The U.S. Environmental Protection Agency has identified the Varroa mite as “the major factor underlying colony loss in the U.S. and other countries.” 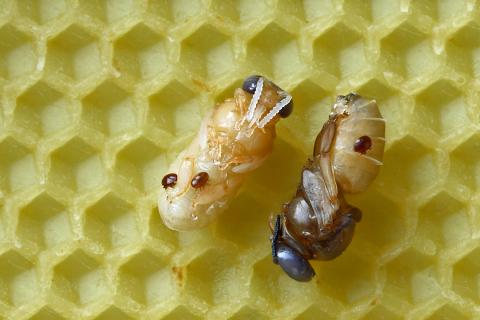 What's the connection between honeybees and GMOs?

Some genetically modified crops express a trait for insect resistance, but the results of studies conducted on these plants indicate that they are not harmful to honey bees.  The insecticidal proteins produced by the currently available insect protected crops are derived from a common soil bacterium, bacillus thuringiensis, and all of the proteins used in insect-protected GM plants are tested for toxicity to honey bees.  None of these proteins have provided any evidence of harm in either short or long term testing with both adult and larval honey bees.

Concerns have also been raised that a type of insecticide called neonicotinoids – or "neonics" –  could be negatively impacting honey bee health.  Sometimes the use of neonics is linked with genetically modified crops, but neonics are used on both GMO and non-GM varieties of crops, like corn, soybeans and canola. Neonics are the most widely used class of insecticides and were adopted to replace more toxic organophosphates. They can be applied using a variety of methods, including soil applications or as seed treatments.  When used as a soil application or seed treatment, neonics are taken up by the plant, but very little of the treatment makes its way into flowers and subsequently pollen.

We understand there is concern about the health of the bee population.  Bees are vital to agriculture and the environment and protecting their health is a shared responsibility among stakeholders. While research indicates that neonics and GMOs are not causes of CCD, biotech companies are continuing to look at the science and conduct more studies to explore the role of agriculture in bee population health.

The good news is that bee populations are currently at a 20 year high, but more can be done to strengthen growing pollinator communities. Many companies who participate in GMO Answers have provided the following information on how you can help protect the bee population.