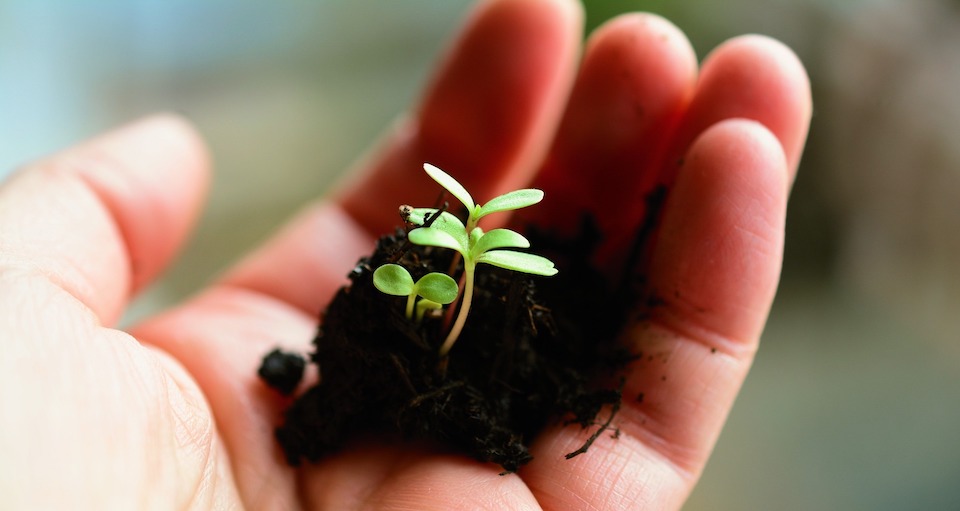 The following is an article written by Mallory Mae Bailey-Tse, Graduate Student in Conservation Biology at Miami University.

Genetically modified organisms, or GMO crops for short, have been vilified to the general public for a number of years. The fear surrounding these crops is largely unfounded by the scientific research available thus far. GMOs have been shown to have many benefits, such as decreasing the use of agrochemicals in farming and helping decrease food insecurity in impoverished areas by increasing the productivity of their yields. They are at the forefront of creating food production on once barren lands. With global food insecurity on the rise, water and land becoming more scarce and less viable, genetically modified food technology may be the best option for feeding the planet and preserving the environment. This article seeks to highlight the mass benefits of GMO technology in the wake of a global construct of misinformation.

What is a Genetically Modified Crop & Why Does it Sound So Scary?

Authors Taiz & Zeiger (2010) note in Chapter 2 of the book, Plant Physiology (5th ed), that the history of GMOs runs deep, and humans have been genetically manipulating plants and animals since the beginning of the agricultural age. If you look closely at the history of our food, take bananas, for example, they are not classified as a GMO crop by the USDA. Bananas, however, have been cloned so that they have lost the seeds of their ancestors and are direct clones of the plant that had what is to be considered the most desirable characteristics of a banana. This process can be either natural or through artificial means, and it leads to the modified genetics of the banana. Genetic modification can sometimes be a natural process for plants — a form of natural selection, where the best traits get passed on or through artificial means. Maybe it is the word artificial that scares people? But what most people don’t understand is that Biotech genetic modification of crops is just a more precise harnessing of this natural process. In this new era of organic and farm to table ideology, it just might be a case of undesirable language over the actual science of crop and food production that creates such a scare. 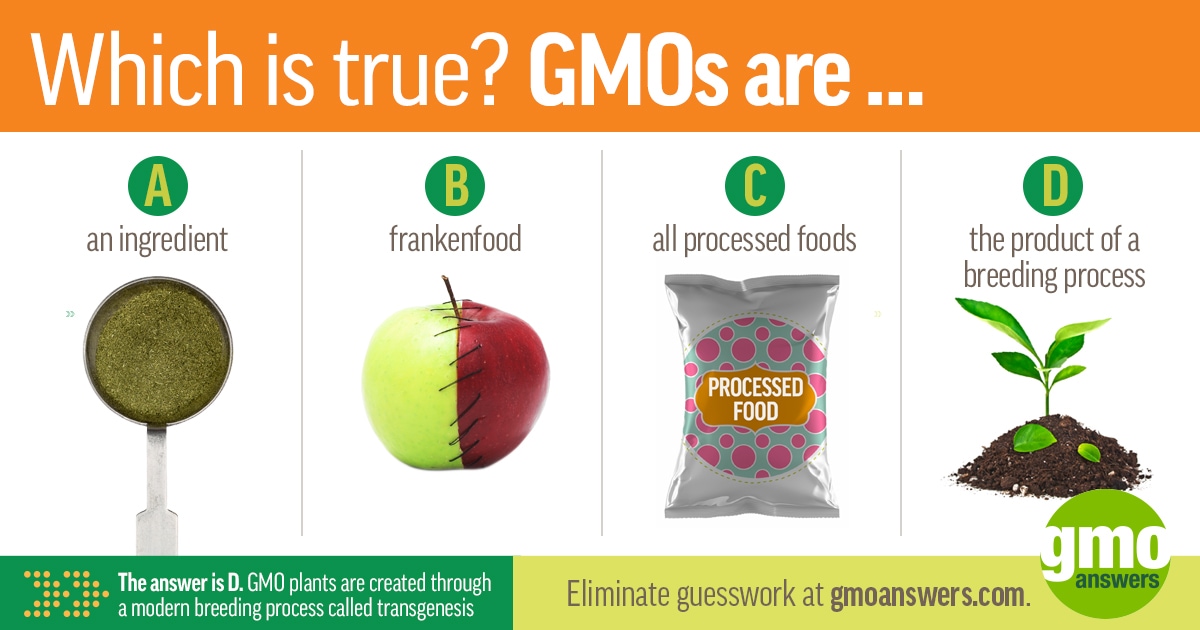 What Types of Genetic Modification Get Used the Most?

The most common definition of the type of GMO crop people think of is the Transgenic Crop type, corn, and soy. Transgenic crops are created outside of the growing fields within laboratories either by direct manipulation or natural manipulation. This is when a specific gene is isolated from one organism and then inserted directly into the target growing crop (Taiz & Zeiger, 2010). The laboratory techniques used in the genetic modification of plants do not always utilize direct manipulation. Instead, it can be used to naturally cross and identify traits in plants in a way that reduces disease, thereby potentially increasing crop yields.

How Does Land Use Factor into Better Understanding GMOs vs Organic?

First, let’s talk reality here – land utilization and impact matters! Climate change is redirecting farming practices into a modern and more environmentally friendly era. With all the responsibility that comes with this knowledge, crop output is essential, and organic farming is not a sustainable practice to feed the world. GMO crops allow agricultural farmers to produce more while utilizing less land versus organic crops that have significantly lower yields per acre. Author S. Savage notes from the available United States Department of Agriculture, USDA, data that the average per-acre yields of organic crops range from 10-35% lower than conventionally grown crops, including genetically modified crops. In short, in the year 2016, the United States would have needed to farm 100 million more acres if we only operated as organic farms. Output and land use have to be considered when there are conversations around GMOs vs. Organics.

So, What about the Pesticides & Herbicides Used in Farming?

First and foremost, something most people do not understand is that no crops are 100% chemical-free. Even organic farms have an approved list of chemicals by the US Organic Standards, and there are no government agencies that oversee pesticide usage. However, genetically modified crops can benefit farmers in these areas where herbicide-tolerant crops (HTC) help avoid plant losses due to weeds and insect-resistant crops (IRC) reduce plant losses due to insect damage. In both cases, each planted acre of the crop can produce more yield, which reduces the need for more farmed land. According to a USDA survey, in a fifteen-year timespan (1995 – 2010), insecticide usage has declined dramatically since the introduction of Bt (insect resistant) staples of agriculture, such as cotton and corn. Another important discovery is the increase of beneficial insects and increased biodiversity, which can happen with even the smallest reduction of insecticide usage. 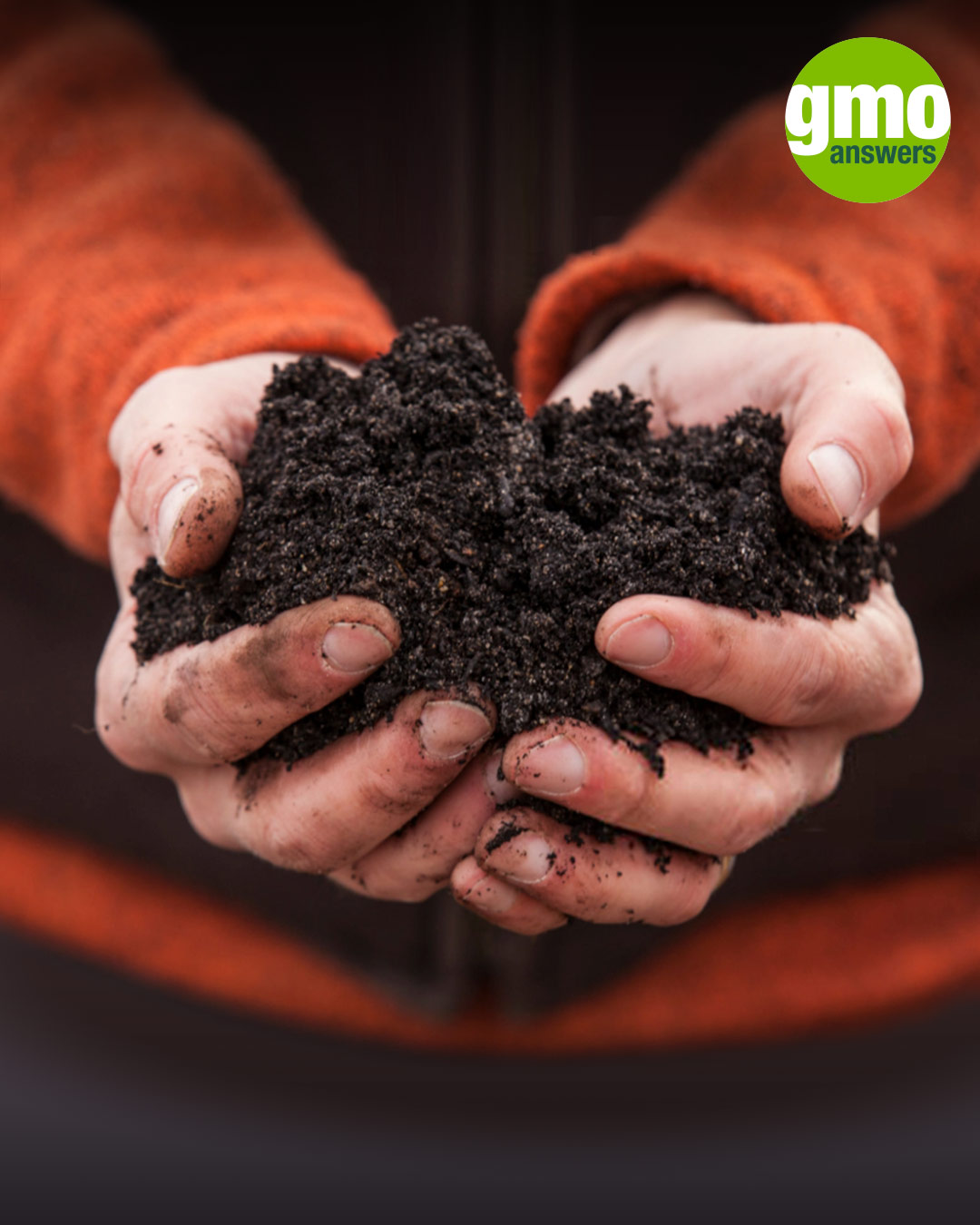 Which Crops Lower our Carbon Footprint?

PG Economics found in their 2012 and 2014 research that genetically modified crops can lower the carbon footprint of producing crops, which is “the equivalent to removing 27 billion kg of carbon dioxide from the atmosphere or equal to removing 11.9 million cars from the road for one year.” This phenomenon has been attributed to reducing GMO crop tillage, fuel usage, and the need for more soil carbon storage. While organic farming gave way to great advancements in better understanding soil health through composting, the production of methane gas due to this composting is a huge concern in relation to climate change. Organic Farmers utilize tillage to increase their crop yield much more heavily than many GMO conventional farmers, which have instead switched to different farming methods, such as no-till, ridge-till, and mulch oil practices due to the negative impacts tillage create in relation to both greenhouse gas emissions and soil erosion. GMO usage in crops reduces the need for tillage and large-scale composting, decreasing their carbon emission impacts. This is another area where misinformation sets a scary tone about GMOs.

Why Does it all Matter?

GMOs are simply always getting a bad rap, predominantly due to misinformation or lack of information as it relates to agriculture and the environment. It shouldn’t come down to taking the Living With The Land ride at Walt Disney World for people to stop villainizing what GMOs can do in regard to feeding our future world and protecting the environment. Also, while organic farming is not inherently better or worse when it comes to preference, the reality is it cannot compete with the future GMOs offer in areas of global food security, the use of agrochemicals, and overall agricultural environmental conservation.

Research and data continue to show that when compared to organic, non-genetically modified crops, genetically modified crops use less land and have a smaller carbon footprint. Genetically modified crops have potential benefits when it comes to the environment. It is a matter of management and creating a plan to maximize these benefits, while addressing some of the concerns. Global food outputs and needs are expected to nearly double by the year 2050, and over the last 20 years, genetically modified crops have increased yields by 22%, according to a USDA representative. This shows promising results, indicating that we can feed our growing population with potentially less damage to the environment. If the public can receive accurate information that isn’t politicized about genetically modified foods and see the technology as something that can help feed people and prevent the degradation of our planet's resources, we may have less food insecurity and land use issues in the future. In other words, let's continue to perform and share the research in ways all food consumers can understand—stopping misinformation before it even starts. 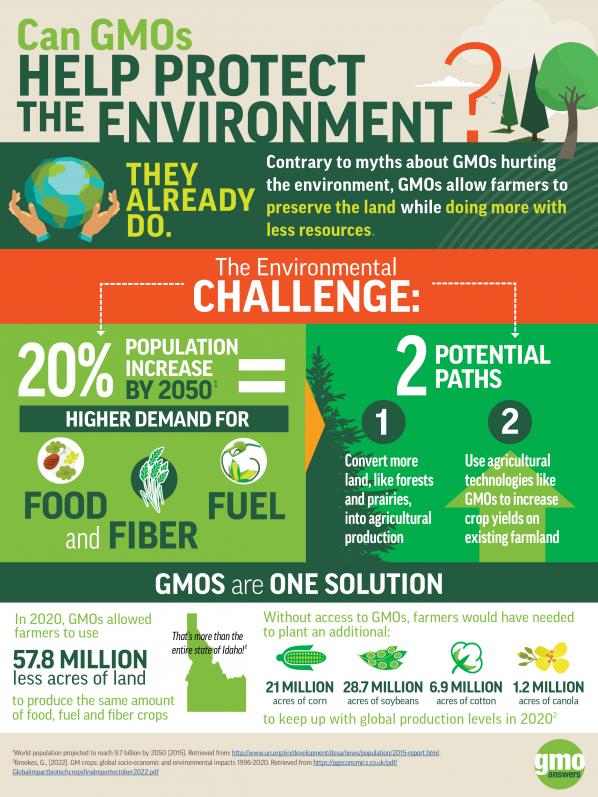