As part of its core mission, GMO Answers provides information about GMO basics, clarifies common misconceptions about GMOs and health, and digs deeper into the role of GMOs in sustainable agriculture, and their impact on the environment.

Well, more than half of consumers surveyed in the U.S. and 15 other countries by Health Focus International believed that GM crops are "worse for the environment," and in a survey GMO Answers recently conducted, we learned that many believe GMOs increase agriculture’s impact on the environment.

Many misconceptions might fuel the belief that GM crops aren’t environmentally sustainable, but in reality, many of the practices often affiliated with sustainable farming are used with GM crops.

Fewer pesticide applications, conservation tillage (which reduces greenhouse gas emissions), and water conservation are all practices that can be used with GM crops. And plant breeders are actually looking for ways to use GM technology to increase efficiencies in agriculture and reduce agriculture’s environmental footprint. For example, crops that more efficiently manage nutrients and increase efficiencies in agriculture are expected to be available to farmers in five to seven years.

Five Sustainable Farming Practices and How They Relate to GMOs

A common misconception is that the adoption of GM crops has increased the use of pesticides when just the opposite is true. Overall GM crops, including crops with the “Bt” (Bacillus thuringiensis) trait for insect resistance, have contributed to a 37 percent decrease in pesticide applications. 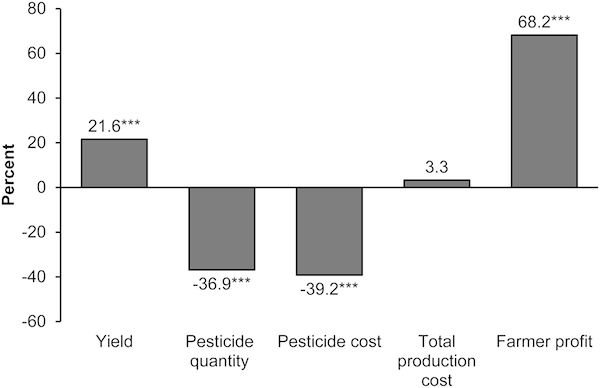 How? Bt crops have been genetically engineered to produce a protein that kills very specific, target insects – like the European Corn Borer – when they attack the plant. These proteins only affect specific receptors in the gut of certain target pests and are harmless to humans, mammals and most non-target insects.

As a result, farmers do not have to spray as many times to kill the insects that would otherwise damage their crops and decrease yield. Indiana farmer Brian Scott explains that by using Bt crops:

"We won't have to come in during the growing season to make a blanket pesticide treatment across the entire field. This means a sprayer is kept out of the field -- meaning it didn't need fuel to power the sprayer or water to carry the chemical. Fewer passes across a field also mean less soil compaction in the wheel tracks. And don't forget I didn't buy any chemical or pay an application fee to a custom sprayer. Because Bt targets specific pests, we are not spraying insecticide on the beneficial insects in our fields."

Did you know: Bt has been used in organic farming for nearly 100 years as a pesticide spray?

Weed control is a constant problem that all farmers must manage to produce healthy, high-yielding crops. One way farmers have traditionally controlled weeds is through tillage, which involves turning over the top layer of the soil to uproot weeds. While this can be an effective solution for weed control, it can make a field vulnerable to erosion and chemical run-off. It also releases carbon dioxide, a contributor to greenhouses gases. 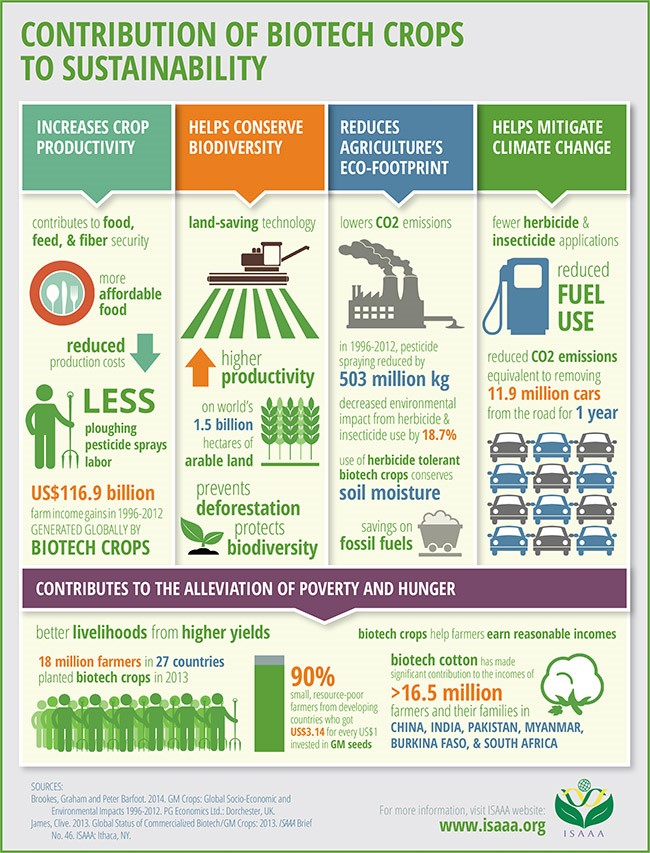 Conservation tillage refers to a practice farmers can employ to till the soil less often. Here’s how it works: instead of tilling an entire field after harvest, farmers can leave the crop’s residue (like corn stalks) in the field, and then plant seeds directly into that residue during the next planting season. This serves as a “mulch” for the next season’s crop, also protecting the soil.

Herbicide-tolerant (HT) crops enable more farmers to adopt conservation tillage because they help farmers to more effectively and efficiently control weeds at a lower cost than comparable conventional cropping systems. Florida farmer Lawson Mozley explains that with herbicide-tolerant GM crops, weeds can be sprayed and left in the field to protect the soil. Then the incoming crop is planted directly into the leftover organic matter, without turning over the soil.

According to CropLife International, traditional tillage practices require up to 60 percent more fuel than a no-till system. Indiana farmer Brian Scott notes that "tillage is our most fuel-intensive operation on the farm. Reducing tillage also improves our soil structure which has a number of benefits, including improved water infiltration and retention and reduced erosion."

Water is one of the most fundamental inputs needed to grow any crop. As population growth, agricultural production, and climate change put ever-increasing pressure on this natural resource, farmers are investing in new technologies to improve water conservation. Farmers utilize many tools to conserve water, including drip irrigation systems and conservation tillage practices. GMOs provide another tool that farmers can employ to help conserve water.

We noted above how the use of herbicide-tolerant GM crops along with conservation tillage aid in soil moisture retention, which can reduce the need to irrigate. But, GMOs can help reduce water use in another way – drought tolerance. This GM trait can help crops cope with stress and yield more when periods of drought occur– without supplemental water from irrigation.

"Drought has visited human populations since the beginning of agriculture, and our ancestral and current agricultural scientists have been developing new breeds with better water use efficiency traits and other strategies (e.g. irrigation) to fight the ravages of drought. But we’ve reached the limit of what we can do with conventional technologies and must find new mechanisms. Biotechnology is one obvious tool to apply by offering better drought resistance genes, stress response genes and associated traits."

Newer GM crops are also being tested that will be flood-resistant, to help farmers in every part of the world better deal with weather extremes. Learn more about innovations in climate-proof crops at Nature.com.

In addition to conserving water, farmers and researchers are looking for ways to further reduce chemical run-off into streams and rivers, using precision Ag technologies to apply fertilizers and pesticides more judiciously and effectively.  According to U.S. EPA, nutrient pollution has affected more than 100,000 miles of our waterways, contributing to the hypoxic zone in the Gulf of Mexico and algal blooms throughout the Ohio River.

Nitrogen fertilizer is an essential nutrient to grow healthy and hearty crops, but plants typically only absorb about half of the nitrogen applied to fields (more information about nitrogen fertilizer management can be found here). Plant researchers have been working to develop Nitrogen Use Efficient (NUE) GM crops in order to help plants more efficiently absorb fertilizers, enabling farmers to purchase and apply less fertilizer, reducing nitrogen pollution into our waters.

In addition to the environmental benefits, NUE crops can help to significantly enhance yields, especially in developing regions with limited access to commercial fertilizers. CropLife International reports that research trials have indicated that the NUE trait has improved yields by up 15 percent over similar crops without this trait. NUE GM corn, rice, and canola crops are expected to be commercially available to farmers within the next five to seven years.

Did You Know: Some people may say GMOs themselves are an example of precision technology in plant breeding?

When we talk about biodiversity, we mean the variety of life in the world or in a particular habitat or ecosystem. It’s commonly believed that GMOs have a negative impact on biodiversity, but as we’ve explained above, GMOs provide many environmental and biodiversity benefits.

Each trait we just described contributes to protecting our ecosystems:

- Better water management with drought-tolerant and HT crops protects an ever-diminishing resource and the ecosystems that depend on it.

- Nitrogen Use Efficient crops in the future will help reduce fertilizer runoff into streams and rivers in addition to increasing harvests.

- Finally, all of these traits positively impact biodiversity by protecting farmers’ yields and reducing the need to bring more land into production, preserving grasslands, wetlands, and forests.

For many farmers like Jennie Schmidt, practices that enhance biodiversity like no-till agriculture and precision Ag are “standard operating procedures regardless if we are conventional or organic or biotech.”

A note regarding monoculture:

A common misconception is that GM crops result in "monoculture" farming. While most would think of a field containing just one crop as monoculture farming, the term instead refers to the same crop being grown repeatedly season after season without the interjection of another crop in between. Dr. Steve Savage explains this topic in detail in this post, and points out that crop rotations have a few drivers, the use of GM crops isn't necessarily one of them.

Many types and combinations of production systems -- from organic to conventional to biotech and everywhere in between -- help contribute to a sustainable food supply. GM crops are simply one example of a technology that can help protect and increase yields so that farmers can produce enough food to feed a growing population and do so in a way that has as little impact as possible on natural resources.

If you have additional questions, feel free to search our questions and answer section.