Everything You Need to Know About GMO Corn

Where and how is biotech corn grown?

Corn is one of the most commonly grown GMO crops around the world, second only to soybeans. According to most recent figures, it was planted in 14 countries on every continent, including the USA, Brazil, Argentina, South Africa, Canada, Philippines, Paraguay, Uruguay, Spain, Vietnam, Colombia, Honduras, Chile and Portugal. GMO corn was planted on more than 60 million hectares, or 150 million acres. That’s almost the size of Texas! (Source: ISAAA)

Corn is the most commonly grown crop in the United States, and most of it is GMO. Most GMO corn is created to resist insect pests or tolerate herbicides. Bacillus thuringiensis (Bt) corn is a GMO corn that produces proteins that are toxic to certain insect pests but not to humans, pets, livestock, or other animals. These are the same types of proteins that organic farmers use to control insect pests, and they do not harm other, beneficial insects such as ladybugs. GMO Bt corn reduces the need for spraying insecticides while still preventing insect damage. While a lot of GMO corn goes into processed foods and drinks, most of it is used to feed livestock, like cows, and poultry, like chickens. (Source: US FDA Feed Your Mind website) 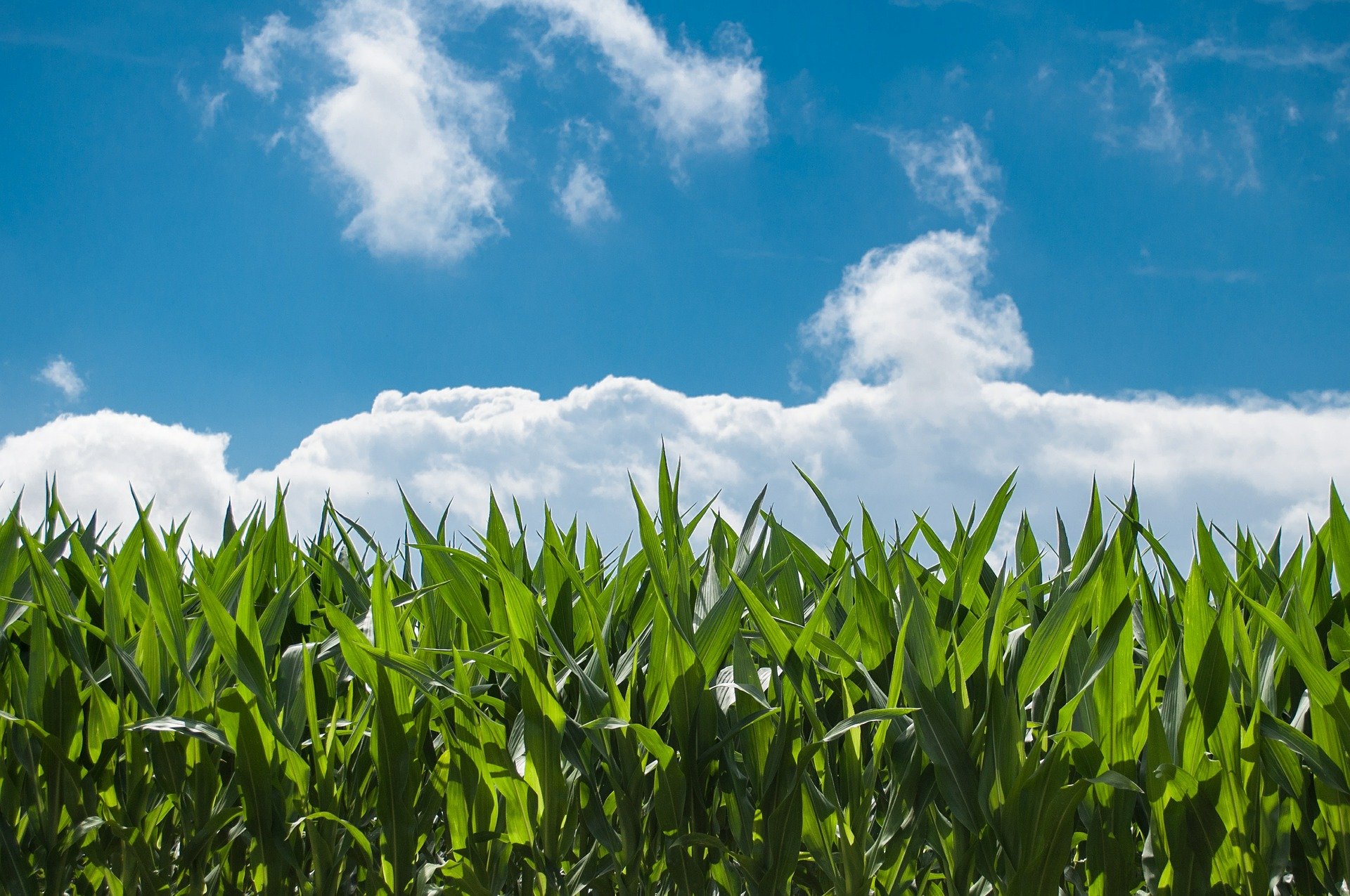 Why does the U.S. grow so much corn?

"As Dr. Bob Thompson points out, the U.S. is the only place in the world that has the climate, soil, water, and topography to produce corn in the amounts we do.  And it is a good thing we do because, without this level of production, the world — including the U.S. — would be a hungrier place."

Corn is planted on about 90 million acres in the U.S., with most of the crop grown in the Midwest / Heartland. About 99 % of the corn grown in the U.S. is field corn, with the remaining 1 % being sweet corn. What’s the difference between field and sweet corn? Whereas you’ll find sweet corn in your produce aisles and farmers markets for you to eat, field corn is typically used for livestock feed, food ingredients, and to make a wide range of consumer products. National Corn Growers Association explains the difference between field and sweet corn here.

In fact, most of the corn grown in the U.S. isn’t produced for human food consumption. "Here’s this one rather simple crop from which we humans have learned to make so many different things,” said Katie Pratt, corn and soy farmer, and author of the blog Rural Route 2.  Those things include feed for livestock, fuel for our cars, oil for sunscreen and water bottles, starch for magazine printing and sidewalk chalk. Farm Progress details the many ways that corn is used in our everyday lives.  Corn is also used to make matchsticks, crayons and carpet, and more! 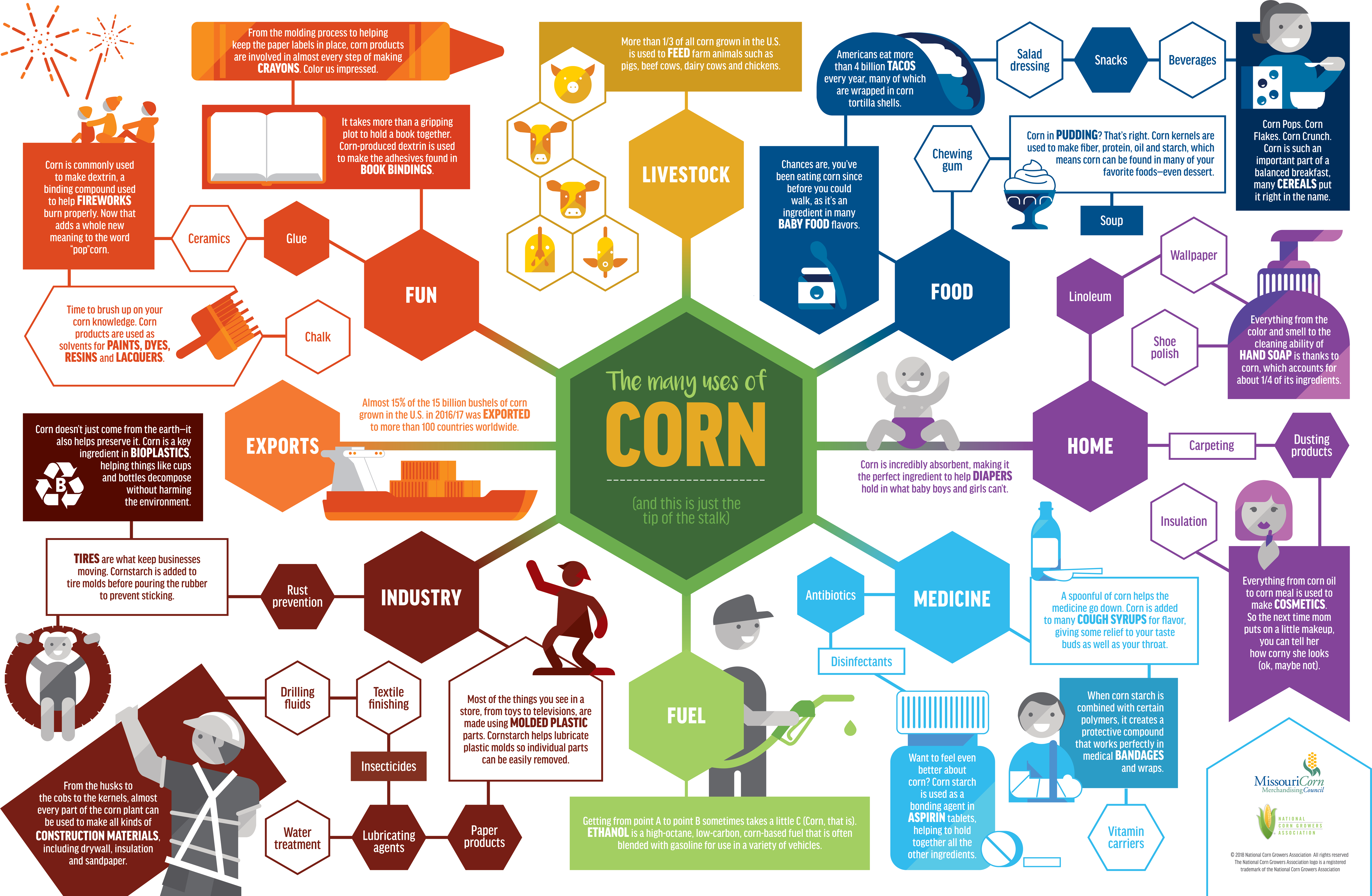 There is a misconception that growing so much corn is contributing to “monoculture” farming. Steve Savage explains how corn is grown in the U.S. Corn Belt, including crop rotations here.  Katie Pratt explains on her blog why corn is grown in the Midwest: "We raise corn and soybeans, as do a lot of Midwestern farmers... Not only do we have the climate and soils to produce these crops well, we also have the infrastructure, market accessibility and workforce. There are reasons why certain things are grown in certain places.”

Field and sweet corn are both available as GM varieties. The USDA keeps track of how much GMO corn is grown, compared to non-GMO corn. Most recent figures show that 88% of the corn grown in the USA is GMO corn. These varieties were created with insect resistance traits that help farmers more easily manage pests, like the corn borer or corn rootworm, and protect their harvest. 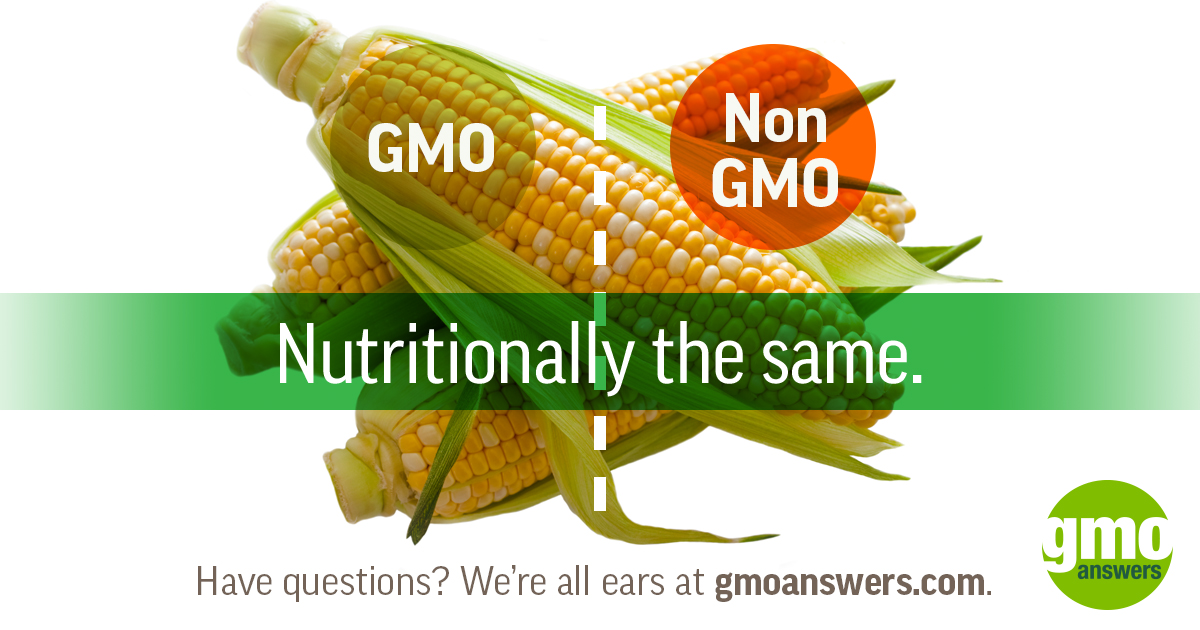 How safe is it for my family and I to eat GMO corn?

The genetically modified foods currently available on the market have passed strict safety assessments and have been proven to be safe for human health. In fact, GMO crops undergo much more testing than conventionally modified crops.

Who ensures GMOs are safe?

What are the benefits of GMOs?

According to the U.S. government, genetically modified crops are safe, resist disease better, provide benefits to the environment and can provide a reliable, abundant food source for a growing population.

Learn more about GMOs and corn and why it’s such a valuable crop for farmers and consumers alike in the following resources:

Corn in the Classroom

“Corn in the Classroom” educational materials include three easy lesson plans designed to educate students on the importance of corn and the role it plays in our everyday lives. A PowerPoint, “Make Your Own Corn Plastic” activity sheet, “Finding Corn in Your Home” activity sheet, “Corn in the Classroom” activity book and “Corn Facts for Teachers” are also available to enhance these lessons or can be used as stand-alone educational tools. Lessons include the “Basics of Corn,” “Many Uses of Corn” and “Corn in the Environment.” While entertaining, these educational plans target grade level requirements for Missouri third graders in science, math, social studies and health.

GM crops were first introduced in the mid-1990s, and since then the availability of different kinds of biotech crops has grown, along with the adoption of those crops by farmers. In fact, biotech crops are the fastest adopted crops in recent times – and for good reason. They help farmers be more productive and utilize more sustainable production practices, such as no-till.

Farm Babe: Why Do We Grow So Much Corn?

Did you know there’s over FOUR THOUSAND uses for corn?

When most people think of corn, they may think of the delicious sweet corn on the cob we eat directly, but that actually only accounts for 1 percent of U.S. corn acreage! What I’m talking about is field corn, which primarily dots the landscape all across the Midwest … also known as the “corn belt.”

If you live here, you may get sick of looking at it and wonder why we have so much, but the reality is that about one in four of these acres is grown for global export. When you think of field corn, you may think of processed food like high fructose corn syrup, although only about 12 percent of field corn ends up in the “junk food” market, which is pretty crazy when you think about it considering nearly 80 percent of processed foods contain some sort of byproduct from corn, soy, wheat, or other commodity grains.

A recent blog post from Food & Water Watch in the The Huffington Post raised concerns about genetically-engineered (GE) sweet corn. Previously, we posted information from experts regarding the effect of GE foods on human health. We asked these experts to weigh in on the GE sweet corn issue.

Genetic engineering may be used when other available tools are ineffective, unavailable, or when a clear benefit, such as reduced reliance on pesticides or increased yield, can be achieved.

Yes, that’s right – corn that has been genetically modified. That stuff that so many activist groups and people claim is so bad and so dangerous and making everyone sick. We grow that stuff. All of our corn has two genetically engineered traits. The first one makes it resistant to the herbicide Round-Up. The second causes it to produce the Bt protein.

We choose Round-Up Ready corn because we are better able to keep the fields free from weeds. That eliminates competition for the corn plants, so they can get as much sunlight, water, and nutrients as possible. We are able to grow more corn on the same amount of land than before we started using GMOs. Bonus: we actually end up using less herbicides now than we did in the past with better results.

We choose the Bt protein because it helps protect the corn from certain types of worms. Worms love corn, but when they chow down, they also hurt our yields. When the plant produces the Bt protein, worms die off before feasting because they are unable to digest it. Since we have started using GMOs, we have not sprayed insecticide on our corn.

How is HFCS digested?

Like other caloric sugars, HFCS provides about four calories per gram. And the way we digest HFCS is similar to other sugars as well. When we consume HFCS, it is broken down into glucose and fructose. Glucose ultimately gets taken up by our cells with the help of insulin, while fructose is handled in the liver and does not need insulin to be absorbed. A 2015 randomized cross-over trial found no differences in blood glucose response or other cardiometabolic outcomes in people who consumed beverages sweetened with HFCS, honey and sucrose daily for two weeks.

Some foods and beverages provide more nutrients than others, which can affect how we metabolize sugars, including HFCS. One such nutrient is fiber. We digest fiber-containing foods and beverages more slowly and the rate of glucose absorption is also slowed. Thus, foods, beverages and meals that contain fiber generally do not impact our blood sugar as much as those without fiber.

A team of four researchers including Elisa Pellegrino, Stefano Bedini, Marco Nuti, and Laura Ercoli of the University of Pisa in Italy have just completed a review of all peer-reviewed literature of genetically engineered (GE) maize (corn) published between 1996 and 2016.

They reviewed 6,006 publications and compiled the results of all the studies that addressed the agronomic, environmental, and toxicological traits of GE maize. Specifically, their meta-analysis sought to reveal the impact genetic engineering has had on yields and quality of maize, on non-target organisms, on decomposition of biomass in the fields, and on crop protection chemical usage.

Their findings were published on February 15, 2018, in the online journal www.nature.com under the title “Impact of genetically engineered maize on agronomic, environmental and toxicological traits: a meta-analysis of 21 years of field data.”  The study found GMO actually improved the quality of grain corn. Mycotoxins were 29 per cent lower, fumonisin 31 per cent lower, and thricotecens 37 per cent lower.

The first assessment of the farm level impacts of using GM maize in Vietnam [1], published in the journal GM Crops and Food, has found that since 2015, crop biotechnology has helped Vietnamese farmers grow more food/feed and substantially improve their income levels, whilst using fewer resources.  It has also reduced the environmental footprint associated with the production of maize.

CropLife International: Biotech Corn And The Fight Against Fall Armyworm In The Philippines

They say a picture is worth a thousand words. On the remote Camotes Island in Cebu, Philippines, Alvarez Adriel De Dave (AD) is one of the only farmers who uses modern technology to plant his crops. He mainly grows yellow corn on ten hectares of land. This video of his farm on social media has attracted over 75,000 views. The video compares the harvest of his non-Bt cornfield with his Bt cornfield and yields remarkable results. AD has been recognized as the Most Outstanding Corn Farmer in his city of Cebu.  We spoke to AD about the video, his farming techniques and how other farmers can benefit from using plant biotechnology.

CropLife International: How Maize Has Changed with the Times

Maize (corn) originated from teosinte – a grass that was only two or three inches long with 12 hard kernels. After a few thousand years of selective breeding we now have modern maize which is 10 times bigger, has 500+ soft kernels and tastes delicious! Maize is now one of the most important crops on the planet. 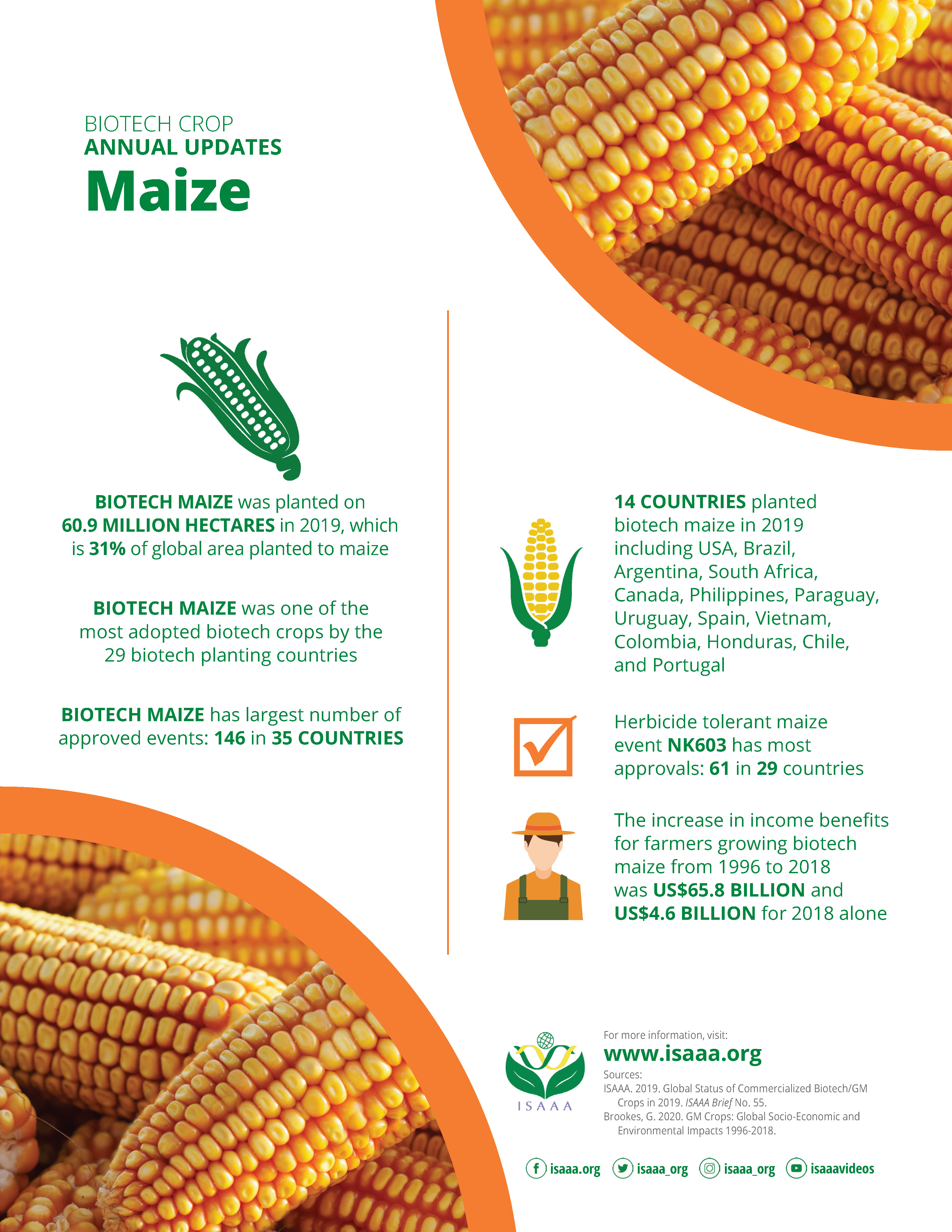 Have more questions about GMOs and corn? Check out these questions and answers that have already been submitted to the GMO Answers website: