How much land does GMOs save?

How much land do GMOs save

Crops improved through the means of biotechnology save land in two ways. One is termed “land sparing” meaning that if farmers can produce more output per planted acre, then there is reduced pressure to add more farmed land in order to keep up with growing global demand. The second way that biotech crops “save land” is more literal. Particularly when farmland is tilled (plowed) for weed control, it is very susceptible to erosion by water or wind.  Topsoil is an extremely valuable feature of farmland, and globally the loss of topsoil to erosion (water and wind) is a major problem for the sustainability of farming. Herbicide tolerant crops make it much more practical for farmers to farm without tillage or with minimal mechanical disturbance of the soil. Non-tillage and cover crops also provide cover for the soil which helps keep it in place. Thus, practices that are aided by herbicide tolerant traits help to conserve soil/land which might otherwise be lost.  These savings can easily be on the order of 1/3 ton/acre/year, but it is hard to estimate the total because it depends on the details of each field setting (slope, soil type, weather patterns and extremes).

So how much land has actually been saved in terms of “land sparing?” A significant amount, but not one easily measured. Herbicide tolerant crops make it easier for farmers to avoid yield losses due to weed competition. Insect resistant crops make it easier for farmers to avoid yield losses due to insect damage. In both cases each planted acre can produce more, thus reducing the need for more farmed land. The complication is that biotech traits are employed within the context of multiple innovations influencing crop yield.  Yield improvements through “conventional” breeding have continued and even accelerated because biotechnology enables “marker assisted selection.”  Just because certain crops have a high adoption of biotech traits in no way limits the rate of improvement or diversity of the base genetics into which that trait has been introduced. Pest control has been improved over the last two decades because of more sophisticated seed treatments and some new, foliar pest control products (fungicides, insecticides). There are also increasing benefits of “precision agriculture,” tailoring everything from fertilizer rates to cultivar choice to the needs of specific portions of fields. It is not really possible to say how much of the yield increase over recent years is attributable to biotechnology because it is just part of this integrated system. 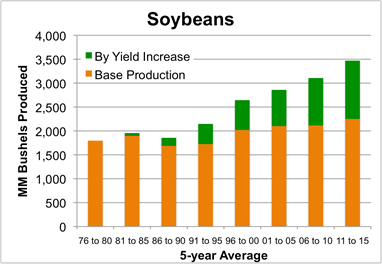 Similar trends are seen for corn and Canadian Canola (below). 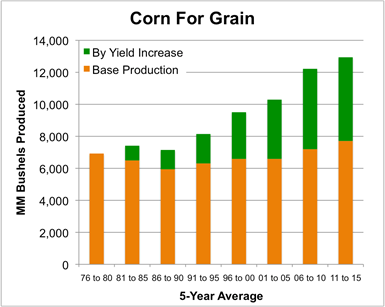 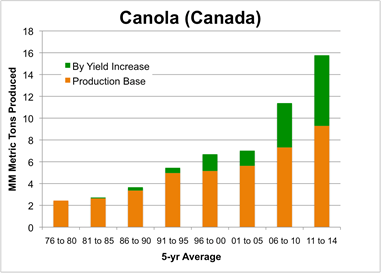 To compare crops, I’ve calculated how much land would have been needed to provide the increased production had yields stayed the same as they were in the period 1976-80.  I then calculated what percent of the actual planting that represented. 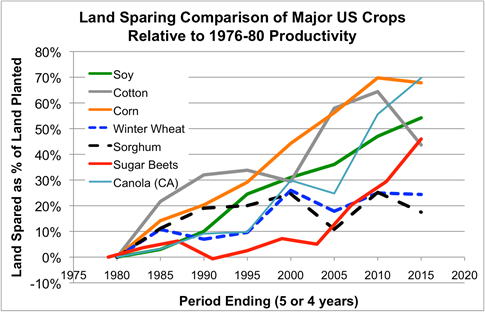 Note the biotech crops like corn, cotton, canola and soy show a continuing trend of increasing land sparing while “non-GMO” crops like winter wheat and sorghum have shown more modest gains.  Note also how the land sparing in sugar beets shot up after biotech was finally introduced in 2008.

To address the question of how many acres of land been saved in major North American biotech crops, I used the average yields just before biotech introduction as a baseline (1991-5 for most crops, the 4 years 2004-7 for sugar beets) and calculated how much land would have been required to give the production increase without further yield gains (see graph below).  For the most recent period, the total land savings via yield is around 55 million acres, which is equivalent to around 18% of total US cropland.  Exactly how much of that is attributable to biotech (“GMO traits” and marker assisted breeding) is difficult to know.  Again, this is a highly integrated system, which is constantly changing because a wide range of innovations. 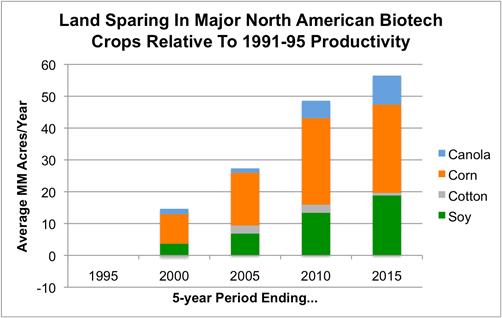