The Enormous Challenge Of Sustainably Feeding An Expanding Population

GMOs and biotechnology and have had a positive impact on the sustainability of agriculture in the last 20 years, according to a new study recently released by PG Economics. GMO Answers took a closer look and highlighted the 5 Things to Know about GMOs based on its results. To dig deeper, we asked GMO Answers volunteer expert and agriculture researcher, Esther Ngumbi to provide her perspective on some of the data presented in another report that was recently released by the International Service for the Acquisition of Agri-biotech Applications (ISAAA). 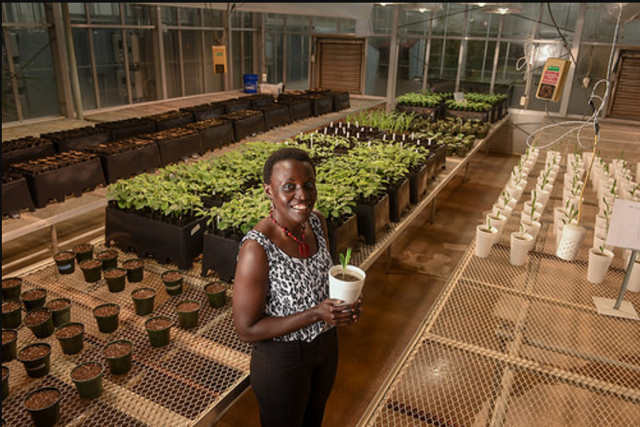 Ngumbi is part of research in agricultural technology that can help mitigate environmental challenges and ensure food security around the world. (Image Credit: Auburn University/Jeff Etheridge)

According to the United Nations Food and Agriculture Organization (FAO), the world population is expected to reach 9.7 billion by 2050. This presents an enormous challenge and necessitates the need to find sustainable ways to grow food to feed this expanding population.

Just like the challenge is enormous, the solutions and approaches we employ to tackle this challenge and achieve food security must be broad. We must use a wide range of tools and technologies and draw from several approaches including climate smart agriculture practices and the use of biotech crops. At the same time, these tools must be sensitive to our environment.

Indeed, biotech crops grown in over 26 countries have contributed to helping feed the current population and are expected to continue to be part of the solutions humanity can use to help tackle the challenge of feeding an expanding population. According to the global status of commercialized Biotech/GM crops 2016 report, in a period spanning over 20 years, 2 billion hectares of biotech crops have been commercially grown. These crops range from maize to soybeans to cowpeas to potatoes.

But there is more to the planting of biotech crops. The benefits are numerous and include increase in crop yields, which in turn leads to the attainment of food security, conservation of biodiversity, improvement of soil health, reduction in costs associated with agricultural inputs needed to grow crops, reductions in the use of water needed to grow crops and the enhancement of plants’ ability to cope with climate change.

Most importantly is that biotech crops can help farmers mitigate the harsh consequences and monetary losses that come with a changing climate. As a result of climate change, droughts, floods and many other weather related disasters have become frequent affecting food production in both in the developed countries and developing countries. These disasters are also accompanied with losses exceeding $1 billion. For example, in 2016, in the United States, agricultural losses as a result of droughts exceeded $5.2 billion dollars.

To deal with the drought, farmers in the United States and around the world, including South Africa, have employed a broad array of tools, including the planting of biotech crops such as maize. This biotech maize is modified to tolerate drought. The successes arising from planting crops that have been modified to withstand the harsh consequences of climate change have in turn led to the appreciation of biotech crops and an increase in the total acreage of planted crops.

Unfortunately, apart from South Africa, Burkina Faso, Sudan and a few other African countries, the appreciation for biotech crops and the potential they have to help Africa attain food security, while helping the continent deal with climate-change related disasters such as drought, is yet to be achieved.

Of course, it is easy to understand. The use of biotech crops remains a controversial topic and there are many myths that have been floated around with regards to how unsafe biotech crops are both to humans and to our environment. In addition, many African countries are yet to put in place biosafety and regulatory controls that are needed to ensure all protocols are followed. However, many of these myths are yet to be proven true by science.

Yet, over and over, science continues to prove that biotech crops, once planted, deliver many benefits including improving crop yields and helping crops withstand the consequences of a changing climate. At the same time, the benefits of biotech crops can mean a lot especially to the over 500 million smallholder farmers. These farmers farm on degraded and unproductive soils and are dependent on increasingly erratic rainfall patterns. When crops do grow, they are affected by diseases, pests, and drought. Too often, farmers lack access to critical agricultural inputs like fertilizers that can enhance crop yields.

Benefits brought about by planting biotech crops, including increasing crop yields, would mean that resource poor farmers reap the benefits that come about with planting biotech crops. In South Africa, for example, biotech crops enhanced farm income by $156 million. And in Burkina Faso, smallholder farmers that planted biotech cotton increased yields by 20 percent with resultant profit increases of $64 per hectare.

This increasing demand should encourage the countries that are still considering adopting biotech crops.

There is no one perfect solution to solving our global challenges. Therefore, governments, farmers, scientists, non-governmental organizations and all stakeholders in the space of developing sustainable solutions to agriculture should be open minded and accommodative to using the many tools that are available including the use of biotech crops. At the end, it will take a broad array of solutions to eradicate hunger, feed our rapidly expanding population, and tackle the many challenges that come with a changing climate and biotech crops have proven that they can be part of the solution.