Over the past few weeks, GMO Answers has shared information about commodity crops that may have genetically engineered traits, including corn, soybean and cotton.

Not all commodity crops are genetically modified – in fact many are not. The U.S. Department of Agriculture has a full list of commodity crops in the United States, including GM and non-GM, here. The only GMOs commercially available in the U.S. are the following eight crops: soybeans, corn (field and sweet), papaya, canola, cotton, alfalfa, sugar beets and summer squash.

This week we'll explore several commodity crops that are non-GM, including cassava, peanuts and rice, as well as the potential for GM varieties of these crops. 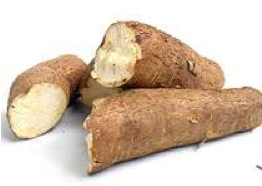 First, cassava, which is the third largest source of food carbohydrates in the tropics after rice and maize, provides basic sustenance for over half a billion people. According to Kenton Dashiell, Deputy Director General for partnerships and capacity development at the International Institute of Tropical Agriculture (IITA) in Nigeria, "Cassava provides a source of livelihood to about 300 million people in sub-Saharan Africa."

Here, the FAO provides a history of cassava and notes that cassava was first cultivated as many as 9,000 years ago on the southern edge of the Brazilian Amazon, where it is still grown. Today, around 200 million tons of cassava are produced globally, with Nigeria as the world's largest producer. Around 90 percent of harvested roots are destined for human consumption, while about 10 percent is semi-processed as on-farm animal feed.

In this video, Ed Buckler, USDA ARS geneticist at Cornell University, explains that cassava has not been bred as effectively as other crops – such as maize – and there is tremendous potential including disease and insect resistance, by taking new, modern breeding tools and applying them to cassava.

The potential for GM cassava also includes biofortification. According to a study from Agriculture Food Security, “more than 800 million people suffer from micronutrient malnutrition in developing countries with Africa accounting for almost 50 percent of the children who are clinically or sub-clinically deficient in vitamin A, particularly under five years of age.” The study found that “an overwhelming majority of scientists agree that GM biofortified cassava will benefit the health of millions in Africa, and that GM cassava conferred with disease and pest resistance will increase cassava production as it is currently plagued by cassava mosaic diseases (CMD).“ 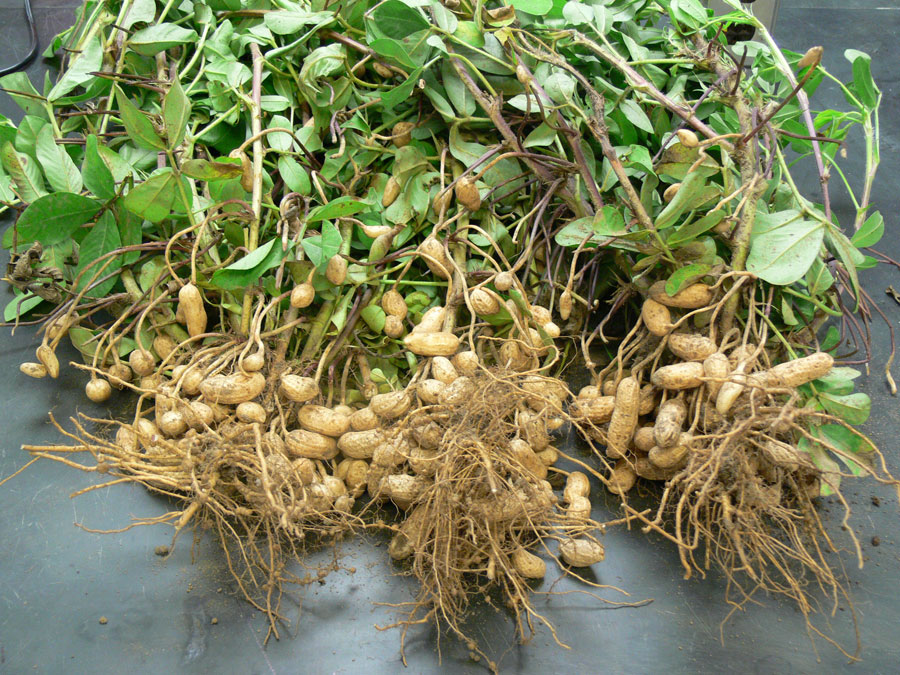 Peanut production in the United States is concentrated in 15 states in the southeast and southwest, with Georgia leading the country by growing more than 40 percent of the nation’s peanuts. According to the National Peanut Board, about 7,500 farmers grow peanuts in these major production areas, and their crops supply peanuts to the rest of the United States and for export to countries, such as Canada, Mexico, some EU countries and Japan. Peanuts grown in the United States are grown for human consumption and used in value added products, such as peanut butter, peanut oil, peanut flour, biodiesel and other uses including peanut hay or cover crops. Peanuts are also grown in Asia, Africa and South America.
(Image source: Omafra)

We spoke with Florida peanut farmer Jeff Pittman and he explains, “Peanuts are a legume crop, so they produce their own nitrogen, which is a win-win for the producer because that saves fertilizer costs by not having to apply nitrogen to the crop.”

In addition to the benefit to the peanut farmer, peanuts are a win-win for consumers. Pittman shares that “with 7 grams of protein in just one ounce of peanuts, they are a very affordable source of protein, especially during times when money is tight for families.”

How are peanut varieties developed?

According to Pittman, most peanut varieties are developed at land grant university breeding programs, which are partially funded by peanut producers through grower check-off dollars. Some new varieties have been developed with traits that benefit consumers. For example, researchers at the University of Florida have developed a peanut high in oleic acid, which not only provides an added health benefit, but the peanuts also yield more per acre and have a longer shelf life.

Interested in learning more about how peanuts are produced? Check out this video from the American Peanut Shellers Association.

The potential for GM peanuts includes consumer benefits, such as reducing allergens. For example, genetic engineering could be used to develop virtually allergen-free peanuts. Food allergies overall are estimated to affect up to 15 million Americans, and “the economic cost of food allergies in children is roughly $25 billion per year,” according to Food Allergy Research and Education (FARE). 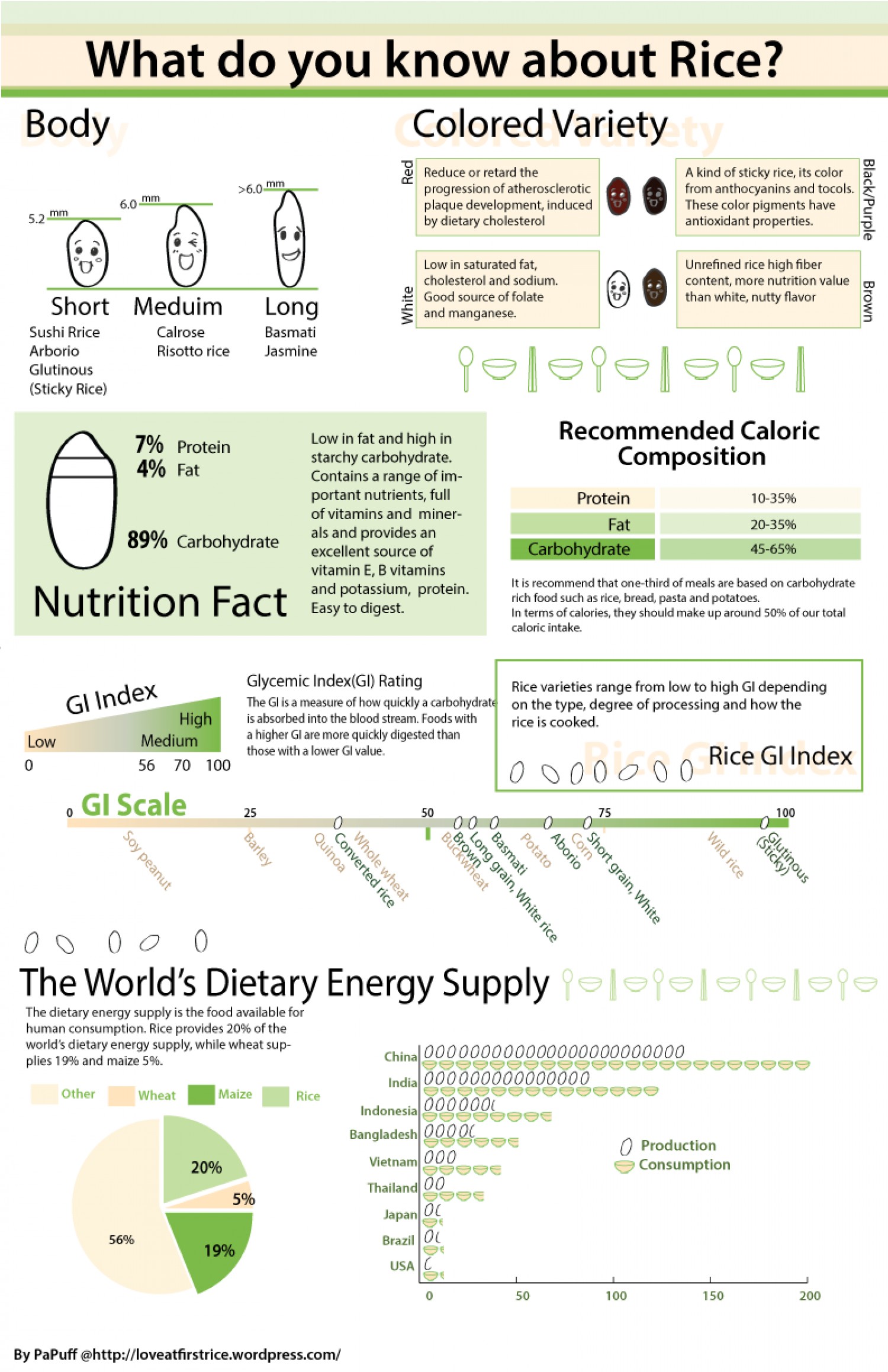 As a primary food for more than half of the world's population, rice is an important commodity crop both in the United States and around the globe. According to the International Plant Nutrition Institute, “Rice cultivation in China began 5,000 years ago, rice culture in the U.S. began in the Carolinas and Georgia about 300 years ago and is one of the nation’s oldest agri-businesses.”

In the U.S., about half of the rice crop, which includes rough or unmilled rice, parboiled rice, brown rice and fully milled rice is exported to Mexico, Central America and Northeast Asia. Learn more about rice exports here.

Most commonly rice is used in the U.S. for direct food consumption – approximately 58 percent, 16 percent is used in processed foods and beer, while 10 percent is found in pet food.

Did you know? Two Japanese car brands were named after rice: Toyota, meaning "Bountiful Rice Field," and Honda, meaning "Main Rice Field. We love this Rice Facts sheet from the U.S Rice Producers Association which has more facts like this!

The Potential - Golden Rice:  While there is no GM-rice commercially available, Golden Rice – a genetically modified rice strain holds tremendous potential to provide nutrients to people around the world who suffer from vitamin A deficiency.

In this post, Cecilia Chi-Ham, Director Science & Technology at PIPRA provides background information on why and how Golden Rice has been created. “Rice is a staple crop in China, India, Indonesia—it can offer as much as 80 percent of the caloric intake. However, rice does not naturally produce vitamin A, iron and other micronutrients. As a result of the micronutrient deficiency, children that rely on a rice-based diet suffer from impaired immune system, blindness, and even death in children. Since there are no rice varieties that naturally produce pro-vitamin A, the owners of patented biotechnologies from both universities and companies have donated their patent rights so Golden Rice can be developed (http://www.goldenrice.org/).”

If you are interested in learning more about how golden rice works, Lucky Tran, scientist with a PhD in molecular biology from Cambridge, explains in this Mic article, “Golden Rice boosts vitamin A levels because it contains copies of a vitamin A producing gene called beta carotene, which has been extracted from plants such as carrots or corn and inserted into the rice genome. Because of the nature of this process, there are no new genes in the rice grain itself, just the plant that produces it.” 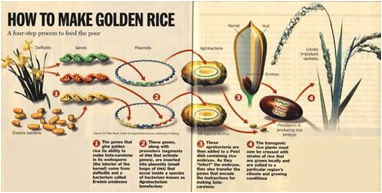 The future of golden rice is still uncertain. As the New York Times chronicles in this story, protestors have destroyed field trials of genetically modified crops and are fighting to halt the development of golden rice. Want to learn more? Checkout this article from Pepper.

The Future of GMOs

Genetic engineering is one of many plant breeding methods that can be used to develop new plant varieties. Only a handful of crops on the U.S. market today are available as GMO varieties, but there is further potential for GM crops to solve significant human health and nutrition problems, from hypoallergenic peanuts to alleviate allergies to treating complex diseases, such as cancer, HIV and Ebola, with medicines derived from GM tobacco.

Interested in learning more? This photo gallery from the Daily Meal discusses if GMO Foods Can Save the World.

We hope you've enjoyed our Commodity Crop Series! If you have additional questions about these crops, or about GMOs and biotechnology in agriculture, ask us on GMO Answers or Twitter and Facebook! Also, we invite you to stop by our booth if you’ll be attending the upcoming Commodity Classic in Phoenix, AZ.