The importance of agricultural lands and soil health for food production as well as biodiversity can never be overstated. In order for land to be used for agriculture, it must first be suitable for growing crops. Crops improved through the means of biotechnology save land in two ways. One is termed “land sparing,” meaning that if farmers can produce more output per planted acre, then there is reduced pressure to add more farmed land in order to keep up with growing global demand. The second way that biotech crops “save land” is more literal. Particularly when farmland is tilled (plowed) for weed control, it is very susceptible to erosion by water or wind.

Topsoil is an extremely valuable feature of farmland, and globally the loss of topsoil to erosion (water and wind) is a major problem for the sustainability of farming. Herbicide tolerant crops make it much more practical for farmers to farm without tillage or with minimal mechanical disturbance of the soil. Non-tillage and cover crops also provide cover for the soil which helps keep it in place.

If you drive through the American Heartland this time of year, you'll see combines rolling through approximately 80 million acres of corn fields. In fact, the United States grows approximately one third of the world's corn.

Why? Gary Truitt shares, “As Dr. Bob Thompson points out, the U.S. is the only place in the world that has the climate, soil, water, and topography to produce corn in the amounts we do. And it is a good thing we do because, without this level of production, the world — including the U.S. — would be a hungrier place.” 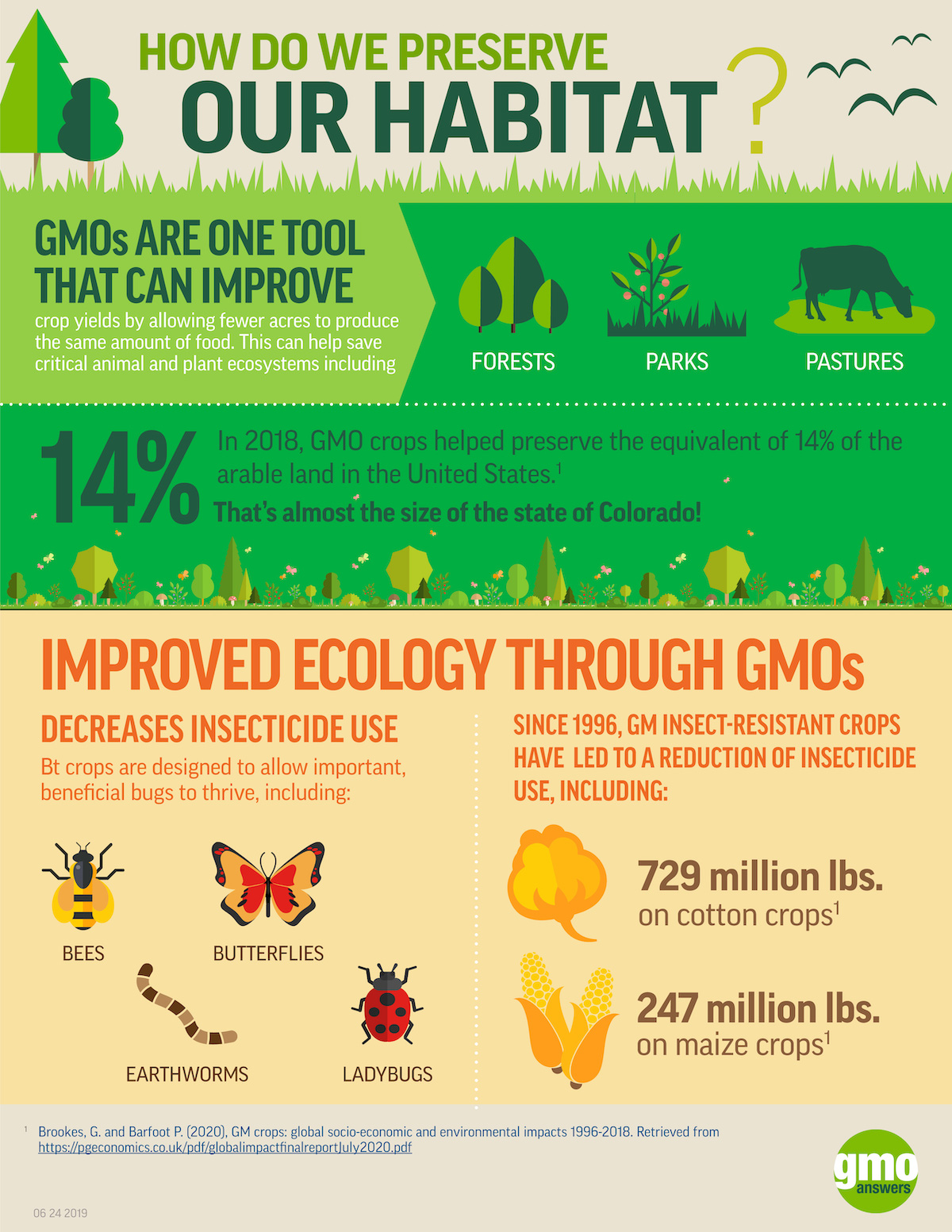 Doing more with less is the challenge of our age, and GMOs help to address that challenge when it comes to agriculture. A recent United Nations Department of Economic and Social Affairs report projected a near 20 percent increase in the world’s population by 2050.

The estimated global population of 9.7 billion means that farmers will need to produce much more to meet higher demand for food, fiber and fuel. There are two potential avenues to do this: we could either convert more arable land into agricultural production, or enable higher yields on existing farmland through advances in agricultural technologies, such as GMOs. Biodiversity is supported by GMOs and help us do more, with less.

Myths about GMOs and Biodiversity

Since its beginnings centuries ago, farming has been an intentional effort to make one plant species dominant in any given tended area or field. From the plant biodiversity side, the struggle has been with other plant species that are particularly “weedy,” which means they are well-adapted to being competitive with the crop under the artificial conditions of farming. This has been true long before there were any chemical crop protection tools and weed control involved hand labor or later mechanical tillage.

In a farming setting, the best way to encourage overall plant biodiversity is to encourage the growth of less weedy species on field boundaries, wind breaks, buffers along waterways or “prairie strips,” because then that kind of biodiversity provides environmental services and often a base from which pollinators and beneficial insects can flourish. In annual cropping systems, there can be the opportunity to grow additional “cover crops” after the main season and these can be diverse mixtures of species that stabilize and feed the soil.

How Biodiversity is Impacted by GM Crops

Herbicide tolerant “GMO” crops make this kind of system even easier to implement. These no-till or minimum-tillage systems are very good for “soil health,” which is really all about the biodiversity of the fungi, bacteria, earthworms, and beneficial nematodes – a kind of biodiversity that is seriously compromised by tillage. So, when it comes to the biodiversity of a healthy soil – herbicides are a major plus because they can obviate the need to till.

Biodiversity is actually enhanced by the adoption of GM crops. Those crops commercialized to date have reduced the impacts of agriculture on biodiversity through enhanced adoption of conservation tillage practices, through reduction of pesticide use and use of more environmentally benign herbicides, and through increasing yields to alleviate pressure to convert additional land into agricultural use.

What About Biodiversity and GMOs' Impact on Insects?

Biodiversity in terms of insects and animals is something that can be quite positive for a farm because even pests have pests, and if that kind of diversity is encouraged, then the insects or mites that damage the crop can be better kept in check. Some GMO crops express a trait for insect resistance, but the results of studies conducted on these plants indicate that they are not harmful to honey bees.

Concerns have also been raised that a type of insecticide called neonicotinoids – or "neonics" – could be negatively impacting honey bee health. Sometimes, the use of neonics is linked with GM crops, but neonics are used on both GMO and non-GM varieties of crops, like corn, soybeans, and canola. Neonics are the most widely used class of insecticides and were adopted to replace another class of pesticide, organophosphates. They can be applied using a variety of methods, including soil applications or as seed treatments. When used as a soil application or seed treatment, neonics are taken up by the plant, but very little of the treatment makes its way into flowers and subsequent pollen.

Research has been conducted to assess the role of neonics in the honeybee population. Amanda Zaluckyj from The Farmer's Daughter blog explains that eight large-scale field studies have concluded there are few observable effects on honeybees from realistic exposure to neonics. Read more in this post on pollinators and pesticides.

Many of the older classes of insecticides were “broad spectrum” and would kill off beneficials and pollinators, as well as pests. Modern insecticides are much more selective in addressing pest control, allowing farmers to encourage helpful biodiversity and still limit pest damage. The Bt-based insect resistant GMO crops are an excellent example of a more selective, biodiversity-encouraging way to farm. In this case, the pesticide is an extremely specific agent which really only affects a pest that actually eats the crop. There is no impact of that on pollinators or beneficials. 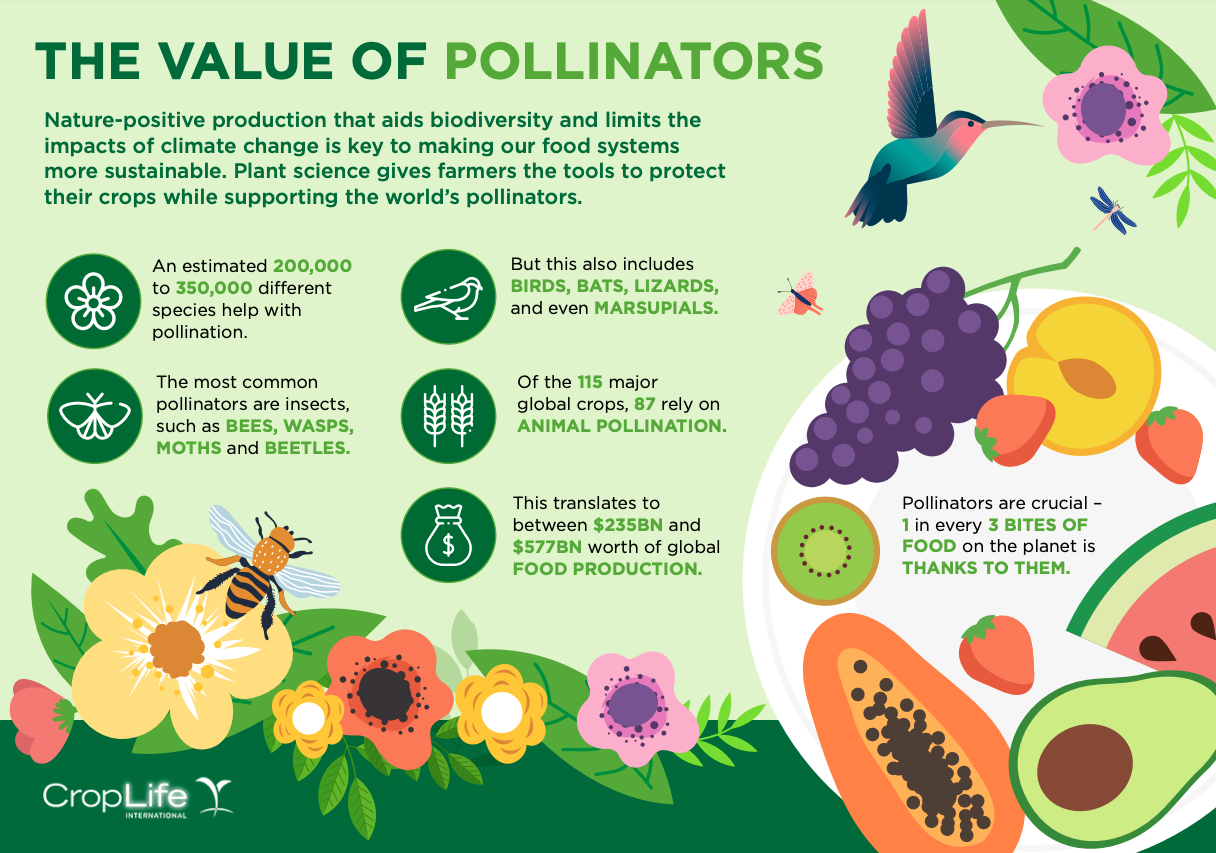 Open pollination is when a flower is pollinated by any other flower of the same species.  If there are separate male and female flowers, all pollination is, by definition, open.  At the extreme, plants may be self-incompatible, such that if pollen is from another genetically-identical plant, the pollen does not germinate, and only pollen of a different genetic constitution can fertilize the egg cell to produce the seed.

Closed or self-pollination is when the pollen comes from the same flower. Sometimes, this occurs even before the flower opens, a process termed cleistogamy. Self-pollinated plants breed true (they retain their characteristics) and do not have the same genetic or generational variety as openly pollinated plants. For example, canola (rapeseed) is predominantly (approx. 70%) self-pollinated. Some soybean cultivars are entirely cleistogamous. Pollen dispersal by insects or wind in these crops appears to be limited to very short distances, which is important not only for pollination but also with respect to the movement of genes between genetically modified (GM) and conventional crops.

Hybrid pollination is controlled pollination by plant breeders between two defined lines of plants in an effort to select certain characteristics and produce superior progeny. The parental lines are sometimes inbred lines that then result in hybrid-vigor in the progeny, so that the progeny is bigger, stronger, and more productive than either parent.  Many of the fruits and vegetables that appear in supermarkets are hybrid varieties; almost all corn (maize) produced in the USA and other developed countries is hybrid from two inbred parents, resulting in much higher yields than can be produced from non-hybrid varieties.

Since 1996, GM insect-resistant crops have led to a reduction of insecticide use, including a 747.1 million pound reduction on cotton crops and 188.2 million pound reduction on maize crops. Through these types of biotechnology advancements, insect-resistant Bt crops have allowed important beneficial insects, including bees, butterflies, earthworms and ladybugs to thrive in their habitats, allowing our natural pollinators to continue to play their critical role in biodiverse ecosystems.

Another upside to GM crops is that the toxin they carry is specific to their predators, making them less harmful than a spray with collateral effects. That means that primary predators like the European corn borer (nicknamed “the billion dollar bug” because of its heavy effects on the corn market) can be precisely targeted, while leaving other harmless, passerby insects unaffected. Such genetic engineering is remarkably efficient – according to a 2014 meta-analysis, GM-based farming has required 37 percent fewer pesticides than conventional agriculture.

Milkweed is the primary source of food for Monarch caterpillars. However, it is also considered an agricultural weed in farm fields and in pastures, due to some species' toxicity to livestock. However, milkweed density has also declined in non-agricultural areas over the same period, meaning the cause of milkweed decline is a more complex issue.

Dr. Andrew Kniss, associate professor of weed ecology and management at the University of Wyoming, explains that “research does suggest that there are more important factors than herbicides responsible for the decline of native plant species near crop fields, including milkweeds.” He suggests that whatever is reducing milkweed in non-agricultural areas may also be contributing to the decline in agricultural fields and seeks to unravel the real reasons for the decline in milkweeds in this post on GMOAnswers.com.

GM crops can continue to decrease the pressure on biodiversity, as global agricultural systems expand to feed a world population that is expected to grow to nine billion by 2050 and will require a 70 percent increase in food production. As an example, global corn yields are up 92% since 1975, saving 163 million hectares of land from cultivation! So increased productivity with reduced impact on diversity is imperative for sustainability.