Explain how genetic engineering can be used to improve crop production.

Genetic engineering, also known as genetic modification, can help us in a variety of ways.

GMOs can help crops and plants by enhancing nutritional content of food or even helping crops fight drought and insects. Below is a list of what traits GMOs can offer plants and crops:

In addition to genetic engineering helping GMO plants and crops thrive in a variety of conditions, it also has many benefits to human society. Cecilia Chi-Ham, Director of Science & Technology, PIPRA at University of California Davis, explains that “society has the responsibility of using science” in a response similar to this question:

“Expanding agriculture increases production but has negative impacts on biodiversity, carbon release to the atmosphere, soil erosion and nutrient losses. Instead, obtaining more food value from the same amount of land requires more efficient crop plants, such as crops that make better use of fertilizers and water, have stronger resistance to pests and disease, and store more reserves and nutrients in the crop components (e.g., seeds, fruits) harvested for food.”

“Genetic engineering can contribute to all of these goals. Research has already demonstrated the potential to develop crops with increased nutrient-use efficiency, greater drought and flooding resistance, stronger disease and insect resistance and higher nutritional content and yield. Why should human society not use this ability to improve crops in order to feed all of our still-growing population while striving to minimize the impact of food production on the global environment?”

Read the full response from Bradford and Chi-Ham here.

If you are interested in how GMOs help the environment, this paper from CropLife international provides more detail and the infographic below demonstrates how GMOs contribute to sustainability: 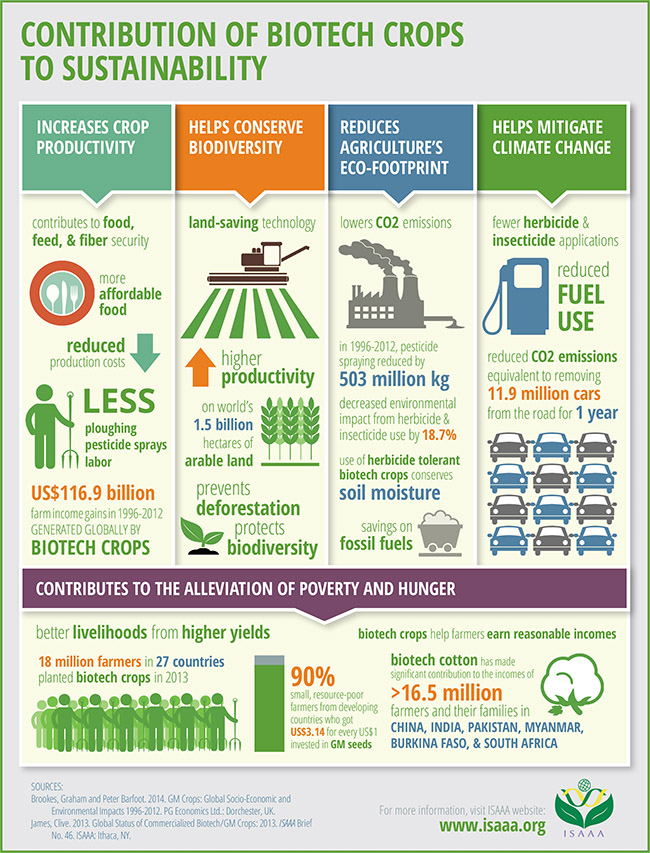 We hope the information provided answers to your question.

Summary: Biotechnology is implemented in multiple fields from medicine, to industrial biosciences to agriculture. Through genetic engineering, scientists have already provided substantial benefits to humans like the treatment of certain diseases, addressing environmental issues and the production of food and energy.

Genetic engineering is part of a toolbox, developed from naturally-occurring processes, used by researchers to develop transgenic organisms.  (these organisms have an altered genomic sequence that allows them the ability to express novel or altered proteins). These altered organisms could be used in many ways to benefit humans. For instance, as a research tool: mice engineered to simulate a human genetic disease, which can then be used to develop novel remedies. Or the organisms can be used to produce molecules of benefit to humans.

One of the first cases of human benefit from genetic engineering was the production of human insulin in bacterial cells. Previous to this, diabetic patients were treated with pig insulin. Use of bacterially-derived human insulin has substantially reduced the number of animals used to produce insulin and also significantly reduces adverse reactions in diabetic patients as the molecule is identical to human insulin. Since the successful production of genetically engineered insulin, many other human proteins have been produced in this manner. This technology has improved millions of lives.

More recently it has become possible to develop therapeutic molecules that can target diseases such as cancer by genetic engineering of naturally-occurring antibodies. These antibodies may have toxic molecules attached to kill cancer cells, or may be modified to improve their sticking to the cancer cells and activating the patient’s own immune system to destroy the cancer.

Industrial biotechnology leads to improved processes by the production of biological molecules, such as enzymes. An example of this is the production of rennin, a key ingredient for cheese-making. Rennin is produced in the stomachs of young animals to digest milk and is useful in the production of curds for cheese. Rennin was originally isolated from calf stomach; however it is now almost exclusively produced by engineered micro-organisms.

Green Biotechnology covers the use of modern plant breeding techniques, as well as genetic engineering of plants. The most frequently genetically modified crops are corn (maize) and soybeans. Crops are genetically modified to allow higher yields due to the production of molecules that are toxic to insect pests, but have no effect on animals and humans. These crops are not devoured by insect pests, and lead to higher incomes for farmers due to better crop yield and lowered use of chemical pesticides. Crops that are resistant to herbicides can also provide higher yield as the farmer can reduce the number of competing weed species in the field. Higher yields are important as the world population grows, and lowered use of insecticides has been shown to be beneficial to biodiversity - where many different kinds of plants and animals exist in an environment. Future potential for genetic engineering of crop plants could influence the yield of the plant, require less water or increase nutrient content. For example ‘Golden’ rice produces higher levels of a vitamin A precursor. This rice could be used as a food source in parts of the world where the major source of food does not contain enough vitamin A, and where this lack of vitamin A leads to blindness.

What the Future Holds

Our increased knowledge of genomes over the last 5 years, coupled with new techniques in genetic engineering allow very precise modification of genes and could be used to drive specific changes for individuals. One potential for this is to reverse gene mutations that lead to disease. These techniques could be used to provide relief for patients with debilitating genetic conditions when cells could be isolated for example from the blood, the genetic defect corrected and then the cells replaced in the body. Doctors now believe that genetic immune defects or muscle-wasting diseases could be treated in this way, with the advantage that the patients are treated with their own cells and would not require the heavy drug regimens associated with heart or kidney transplants.

Genetic engineering has already provided substantial benefits to humans as a result of the treatment of certain diseases and the production of food and energy. Further improvements in technologies and better understanding of the mechanisms will in the future provide increasing potential for development of processes that increase human well-being.

How are genetically modified crops beneficial to humans

I just want to know more good things about GMO's.

Impact of genetically engineered maize on agronomic, environmental and toxicological…

The impact of Genetically Modified (GM) crops in modern agriculture: A review

Agrifood — the $8 trillion industry that’s worth your salt