No Worries: GMOs and Earthworms Can (and do!) Co-exist

A reader brought to my attention the following meme she found being passed around on social media: 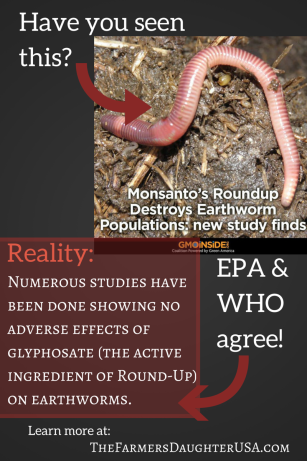 After doing a (very) little bit of digging, it was pretty easy to debunk this one as not true! As you can see from the meme, there is supposedly a new study showing that Roundup, the active ingredient of which is glyphosate, kills earthworms. Of course, Roundup is commonly used in fields with corn and soybeans that have been genetically modified to resist it. It allows us to kill the other plants in our fields that are competing with crops for those precious resources. Lots of anti-GMO activists try to (unsuccessfully) link glyphosate with ill effects, such as killing earthworms.

So, let's take a minute to debunk this one...

Let's explore the obvious first: We have earthworms in our fields. My family grows Roundup Ready corn and soybeans. We have for years and years now. On any given day, especially when it's rainy, you can go play in our dirt and find earthworms. Just to be sure, I also confirmed with my brother (who does soil sampling for various farms in the area for work) and he also confirmed that there are earthworms present in fields all around this area that have consistently and recently (as in the last planting season) sprayed with Roundup.

So, right off the bat we know this graphic is false. We have been using Roundup for quite a while now and there are plenty of slippery and slimy earthworms crawling around in our fields. But what about the actual science?

Thankfully, there is a ton of scientific evidence available to show that earthworms are not harmed by Roundup. First, let's take a look at how Steven L. Levin, Ph.D., from Monsanto, who has worked in the field of toxicology for 25 years, has to say about this very issue over at GMO Answers:

"Monsanto has conducted several laboratory toxicity studies that demonstrate that glyphosate and the original Roundup herbicide are not harmful to earthworms at soil concentrations that greatly exceed levels expected by normal applications (Giesy, et al., 2000). This testing was done with the earthworm species Eisenia foetida, which is a common surrogate and has shown comparable sensitivity to pesticides as other earthworms (Edwards and Bohlen, 1996). In these studiesn Roundup herbicide was incorporated uniformly into the soil to ensure exposure of the worms throughout the study. There was no mortality of earthworms observed at the highest test concentration of 5,000 parts per million (ppm and equivalent to mg/kg dry soil) of Roundup herbicide, and no adverse effect of any kind was seen at the level of 500 ppm. For comparison, glyphosate concentrations in soil immediately after application of a glyphosate herbicide are typically less than a few ppm in the top centimeters of soil and are dependent on the amount of herbicide intercepted by target plant material."

So, what Dr. Levin is saying is that even at very high concentrations - much higher than will ever show up in an actual field of Roundup Ready crops - earthworms are just fine. But, I know what you're going to say - Dr. Levin works for Monsanto and so you can't trust him.

Dr. Levin also cites to Biology and Ecology of Earthworms by C.A. Edwards and P.J. Bohlen. As he explains in his response, this is the go-to book when it comes to finding out information about earthworms. In the book, the authors rank various chemicals for toxicity related to earthworms. "4" is the highest ranking and the most toxic. "0" is the lowest ranking and the least toxic. Glyphosate was given a "0" rating. That means it isn't toxic to earthworms.

We can also look at what the EPA has to say about this issue. As park of EPA testing prior to certifying a pesticide for commerical use, the EPA wants to know how the chemical is going to affect other parts of the environment, not just the plant being sprayed. It found: "Based on current data, EPA has determined that the effects of glyphosate on birds, mammals, fish and invertebrates are minimal." (Source: EPA RED Sheet)

Interestingly enough, one study found that glyphosate actually makes the soil conditions more favorable to earthworms by removing other toxic things from the soil.

But what about the study cited by GMOInside?

Unfortunately, the study itself is behind a pay wall. That means if you want to read it and analyze it, you have to pay to do so. The link to the study is here. From the synopsis, it looks like only six earthworms were used in each group, which really seems to be a small amount considering the claims the study is attempting to make. Furthermore, according to others that have read the study (check out the GMO Skepti-Forum on Facebook if you're interested...), the results of this study were statistically insignificant and weren't even reported. But even if they had shown something, the great weight of scientific evidence show us a different result. This study would be an outlier. It would certainly need to be repeated before it could confidently make such claims.

Meanwhile, I'll tell the earthworms in our fields that you were worried about them.