Nine Things You Need To Know About GMO Salmon

There is big news in the world of biotechnology!

In 2015, the Food and Drug Administration (FDA) approved genetically engineered AquAdvantage® Salmon for human consumption. In March of 2019, they lifted their import ban on the fish, pending finalization of labeling guidelines for bioengineered foods. Salmon is now the first genetically modified fish (and, incidentally, the first GM animal) to be approved for human consumption.

Naturally, there are many questions about GMO fish and the new uses of genetic engineering (GE) in food, such as what is genetically modified salmon? And how does it differ from non-GMO salmon? We'd like to help answer some of these questions by sharing some GMO salmon facts with you now. 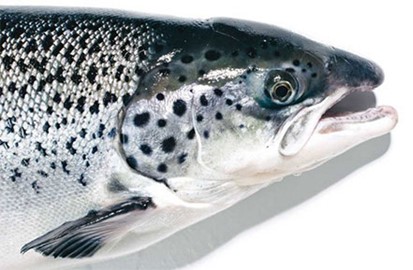 1: What is AquAdvantage® salmon?

This salmon contains a growth hormone gene from the fast growing Pacific Chinook salmon and a promoter sequence (a fragment of DNA) from the ocean pout. Combined, the gene and promoter sequence, which acts like an “on” switch, enable the salmon to grow year-round instead of seasonally like wild or farmed salmon.

Research on genetically engineered salmon started in the mid-1980s. After years of research, access to a growth hormone gene and identifying the DNA sequence, the first transgenic salmon was created in 1989, but it wasn't until almost twenty years later, that the FDA approved this genetically altered salmon. 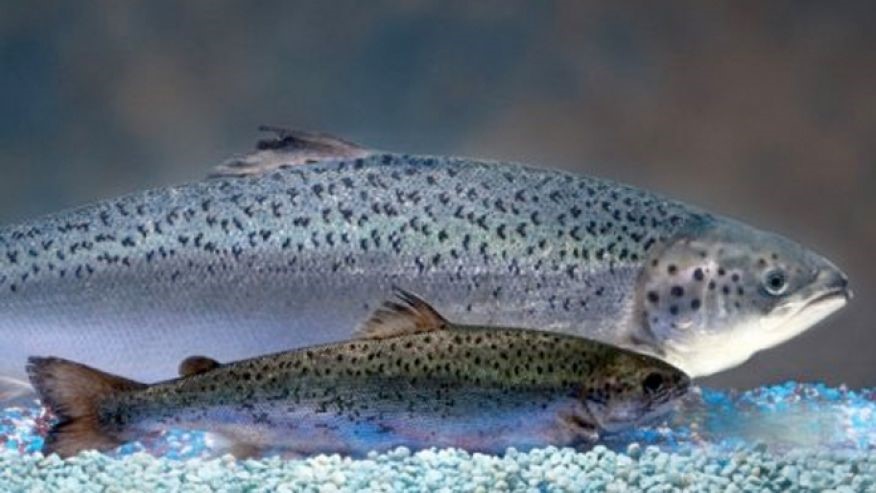 A genetically engineered AquAdvantage salmon (background) alongside an Atlantic salmon of the same age (foreground).

Salmon is one of the most popular fishes available. As of 2014, salmon is the second most consumed seafood in the U.S. Salmon are either caught in the wild through commercial fishing or they are raised via aquaculture (fish farming). Since the 1990s, there has been a decline in wild Atlantic salmon populations.

3: What's responsible for the decline in wild salmon?

And yet seafood consumption will nearly double by 2050.

This means that farmed fish production will likely need to increase by 133 percent to meet projected fish demand worldwide. GM salmon will provide a sustainable and fast-growing alternative to wild salmon and enhance the production of farmed salmon.

4: Is the AquAdvantage® salmon safe?

Yes. Approximately 20 years of research, testing, evaluations, development and regulations went into getting this salmon’s FDA safety approval. In fact, all GM food products must be found as safe as their non-GM counterparts before they come to market.

Here's what that review process for GMO crops looks like: 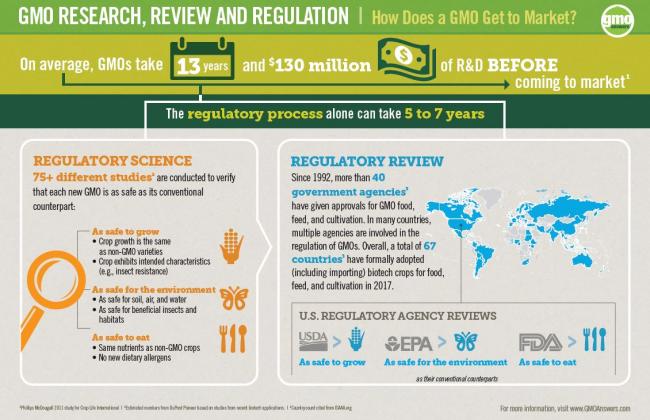 5: Even though it’s FDA approved, isn’t this fast-growing salmon a ‘Frankenfish’ salmon?

As the American Council on Science and Health points out, “the term ‘Franken’ is thrown in front of a lot of biology that anti-science activists distrust and fear because they do not understand.” Scary terms and incorrect labels about GMOs are an easy way to create fear and doubts around the safety of GMOs.

6: How does this GM salmon impact the environment?

This salmon has been developed to actually benefit the environment. For example:

Other resources on this topic include:

7: Will it create new allergies?

No, this salmon will not create new allergies. In fact, no GMO crop on the market today creates new allergies, and rigorous testing ensures they never will. If a person is allergic to a non-GM plant or animal, for example salmon, he or she will also be allergic to the plant’s GMO counterpart.

8: How is GMO salmon contained; will it breed with other salmon?

The FDA requires this salmon to be grown in physically contained land-based facilities, further reducing any potential impact or breeding with wild salmon populations. The tanks that house the GE salmon have netting and screens to prevent escape. All water pipes going into and out of the facility have multiple physical barriers, such as metal screens, filters and pumps that fish cannot pass through.

As an added precaution, all genetically modified salmon eggs are female and sterile, making it impossible for them to breed among themselves and with other salmon.

9: What happens next with AquaBounty’s salmon? When can we expect it to be in stores?

Although the FDA has approved AquaBounty GM salmon for human consumption, it may take a couple of years before it hits store shelves. There are many production planning requirements that need to be worked out before commencing commercial production.

Curious to learn more about the AquAdvantage Salmon? These resources provide more information: