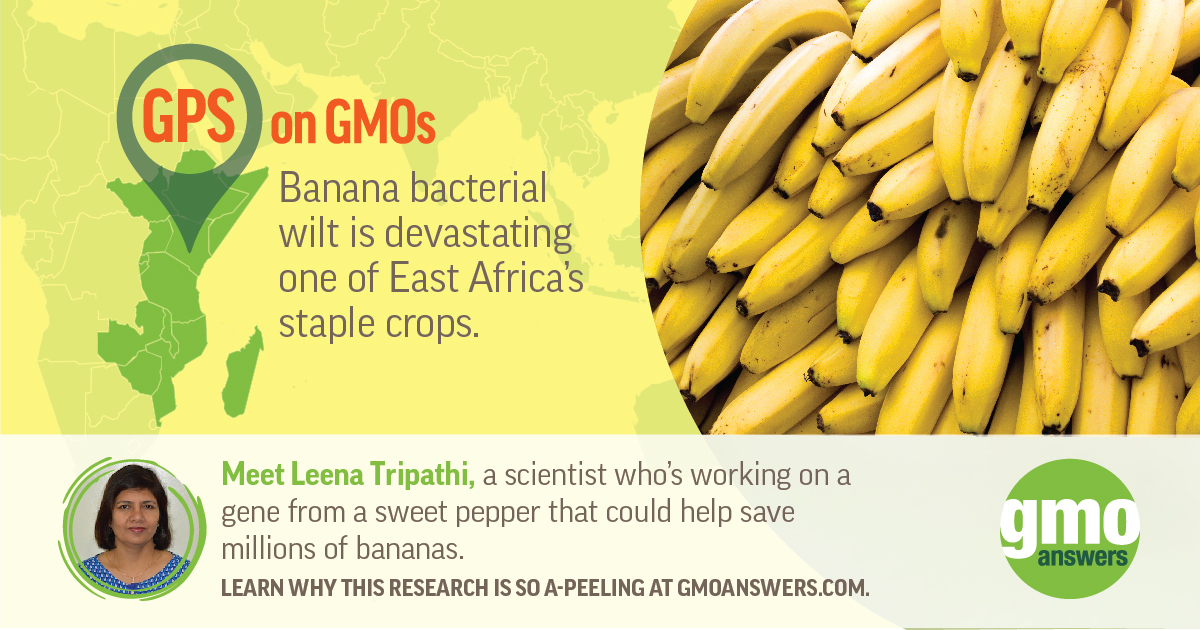 As part of GMO Answers’ GPS on GMOs series, GMO Answers is highlighting some of science and agriculture’s revolutionary female leaders and their research in specific parts of the world. The following post is the first installment of this series and highlights the cutting-edge research being led by Leena Tripathi, Principal Scientist and Deputy Regional Director of East Africa Hub of International Institute of Tropical Agriculture (IITA). Her research focuses on finding a solution to Banana Xanthomonas wilt, a disease devastating the banana crop in the region.

The banana is an important fruit crop globally, and is one of the most important staple food crops in East Africa, particularly for Uganda, Tanzania, Burundi and Rwanda. It feeds more than 100 million Africans and is mainly grown by smallholder subsistence farmers. Annual global production of bananas is about 145 million tons and approximately a third of that production is in Africa. Uganda is the world’s third largest grower with a total annual production of about 10.5 million tons. It is Africa’s biggest producer and consumer of bananas. Annual per capita consumption of bananas in Uganda is the highest in the world at 0.70 kilogram daily per person. The traditional meal called ‘Matooke’ — a mashed meal consisting of green bananas (plantain), which are peeled, boiled (or steamed in banana leaves), is the main food for Ugandans.

The production of bananas is affected by several diseases and pests. Banana Xanthomonas wilt (BXW) is a bacterial disease threatening the production of bananas and the livelihoods of millions of growers in East Africa. The disease was originally reported in Ethiopia and first identified in Uganda in 2001 and subsequently in the Democratic Republic of Congo, Rwanda, Kenya, Tanzania, and Burundi. This disease affects all types of bananas in Africa. Economic losses of about $2 to 8 billion have been reported over a decade in East Africa. BXW starts with wilting of leaves or male buds and premature ripening of fruits, leading to the death of plants and rotting of fruits. It causes severe infections, which can cause a complete loss of a plantation. Once BXW occurs in a field, there is no option other than removing all infected plants. BXW disease is transmitted mainly by insects, contaminated farming tools and infected planting materials.

The economic impact of the disease is potentially disastrous because it destroys whole plants leading to complete yield loss, and farmers do not have the option of relocating to new planting sites that are infection free. The production losses are about 65 to 80 percent in Democratic Republic of Congo and Uganda, and 40 to 50 percent in other countries in East Africa. It causes crop production losses of more than $500 million every year. Solutions have to be found fast before this disease destabilizes food security in the region.

Currently there are no commercial chemicals, biocontrol agents or resistant varieties available to control BXW. It can be managed by following cultural practices, such as the cutting and burying of infected plants, restricting the movement of banana planting materials from BXW affected areas to disease-free areas, using clean farming tools and removing male buds. However, the adoption of these practices has been inconsistent as these techniques are labor intensive.

Given the rapid spread and devastation of BXW across the continent, genetic engineering tools offer an effective, safe and viable way to develop resistant varieties. So far, resistance to BXW disease has not been found in any banana varieties. Even if resistant varieties are identified, traditional breeding of bananas to transfer resistance to farmer-preferred varieties is a difficult and lengthy process due to the sterility of most varieties and long generation times. Genetic engineering, which facilitates the transfer of useful genes across species, has been shown to offer numerous advantages to circumvent the natural bottlenecks to breeding bananas for its improvement. It provides a cost-effective alternative to develop banana varieties resistant to BXW disease.

GM bananas have been developed and tested for resistance to BXW disease under laboratory and glass houses. The promising modified bananas were further evaluated under field conditions. The GM bananas infused with wilt-resistance genes have been shown to be 100 percent resistant to BXW through three successive crop cycles under field conditions. The banana plants perform exactly like the non-modified bananas. Aside from full resistance to BXW, these bananas show yield comparable to non-modified varieties, indicating there were no observable unintended impacts of the transgenes to crop performance. These GM bananas are not likely to produce allergens and toxins. Still, they will be tested for food and environmental safety in compliance with biosafety regulations. They will also be tested to make sure that GM bananas have the same nutritional content as their non-modified counterparts.

The GM bananas resistant to BXW will be ready for commercialization by 2021 in Uganda and Kenya. Researchers estimate that farmers will adopt GM bananas by up to 100 percent once it is released with an expected initial adoption rate of 21 to 70 percent. The financial benefits range from $20 million to $953 million across target countries where the disease incidence and production losses are high.

BXW resistant GM bananas will increase the available arsenal of weapons to fight the BXW epidemic and save livelihoods in East Africa. Both farmers and consumers will benefit.