Is the debate about health and safety and GMO truly unbiased?

Initially this question seems rather vague, but actually it is an excellent question from a person who is clearly thinking very carefully.  Essentially this is asking: How do we know who or what to believe, seeing that GMO advocates and opponents make very contrasting claims and each point to their own favorite pieces of evidence. There is no straight answer, and so I need to step through various levels or reasoning and evidence.  So let’s begin:

Everyone can tell stories, and often these can be scary.  However anecdotes are notoriously unreliable.  For example, I was at a meeting when someone cited numerous cases of cancer in his neighborhood and asked if they were caused by a certain factor.  A representative from the state health department was able to state that that they had analyzed cancer frequencies state wide and there was no correlation with the factor mentioned.  But what about the accumulation of many such stories? Many anti-GMO websites rely on such anecdotes.  However, “the plural of anecdote is not 'data'.”

A few months ago a neighbor sent me a scary story from a website about glyphosate causing birth defects (notably neural tube defects) in Argentina, with citations to scientific paper seeming to lend credence to the claim. (Note: glyphosate itself of not a GMO but is often used with glyphosate-resistant GMO crops). I checked a couple of the citations and found that they did not say what was claimed.  They reported on the epidemiological data on birth defects in Argentina and suggested that there might be some association with agricultural chemical usage, but they did not specifically point to glyphosate. The writer of the scary website piece made the connection.

So could it be correct anyhow?  Let’s consider what to expect if it were true: glyphosate-resistant corn has been used for 17 years, especially in corn-growing states like Iowa, and GMO corn now accounts for more than 90 percent of the U.S. corn crop, according to USDA statistics.  If glyphosate was causing neural tube defects it should be showing up by now, but a check of data from the CDC shows that neural tube defects in the U.S. have in fact declined since the introduction of GMO corn. 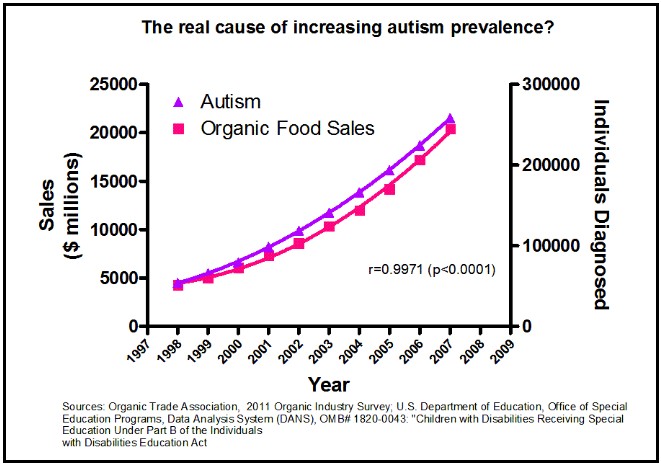 Correlation does not prove causation

But what if there was a correlation between some health aspect and the adoption of GMO crops? That really makes it scary!  Yes, autism, allergies, asthma, etc., are purportedly on the rise and we don’t fully understand why, so we search for answers by looking for correlations and then find them.  But that doesn’t show that they are the cause. Consider the adjacent figure showing an almost perfect correlation between the uptick of autism and the increased consumption of organic produce.  Am I suggesting that organic produce causes autism?  No, but isn’t the correlation scary?  So remember: correlation does not prove causation.

So how can we prove causation? Even the best researchers have some bias. They see themselves as honest and unbiased, but there is always a subtle inclination to try to get the hypothesized results.  The gold standard is what is called a double-blind trial.  For example, in a feeding trial the researcher plans the trial, but the food should look identical.  The technicians should not know what feed is given to which animals, and the analytical staff should not know which animals received which food. This is done through coding. Only after the feedings and analysis are complete and the codes translated into the different treatments is there any search to check whether the food was responsible for any observed effects.  Why all this trouble? Now we get to the heart of the answer: to eliminate bias.

Anything published as a report by any organization, be in industry or an organization, must be regarded as unproven unless two things are done: it is published following peer review, and it is repeated by others.  There was an excellent article in The Economist in 2013 entitled “How science goes wrong”.  In that article, they point out that subtle bias creeps into much research, and not everything is done correctly, such that 75 percent of seminal medical research papers cannot be repeated by others! 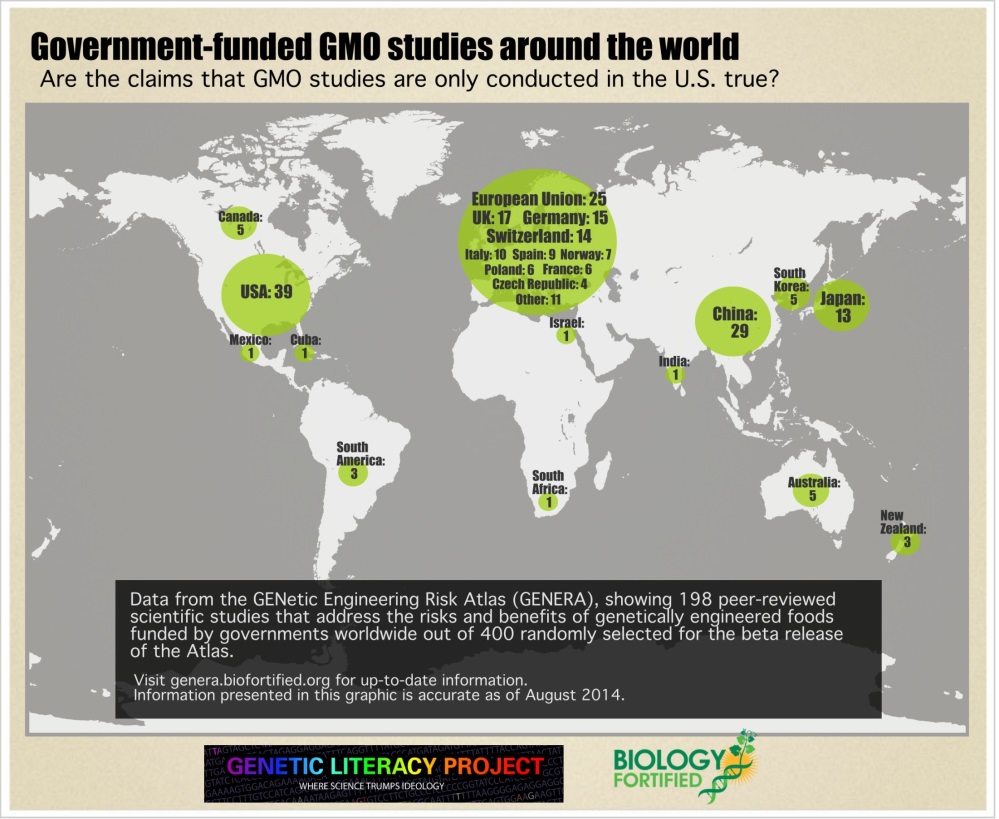 Who funds the studies

We should rightly be suspicious of studies by industry or funded by industry, or at least until such studies are independently verified.  Likewise we should be suspicious of any studies funded by anti-GMO organizations.  Some people think that all favorable studies are industry funded, but this is not so.  An examination of funding source by Biofortified found that 50 percent of such studies were government funded, even in Europe.

Under peer review, two or three purported experts read the submitted manuscript with data and give an opinion as to its reliability.  However, not all peer reviewed publications are equal: some are top quality and some are low quality, suspect, or downright junk.  But how are you to know?  (See a source of such information in the next paragraph.)

First, there is the quality of the journal, because top journals only publish the best of papers after a thorough review by top, very picky reviewers, whereas at the other end there are hundreds of low-quality journals that publish virtually every submitted paper after a skimpy review by poorly qualified or uncritical reviewers.  So which journals are reliable?

The most selective are Nature, Science and The Proceedings of the National Academy of Sciences, but even these occasionally make mistakes.  Reputable scientists can readily tell you which are the highest quality journals in their field (and which are not).  There is a numerical value called “impact factor” which is the average number of times each paper is cited by others.  In general, articles in a higher quality journal are cited more often and it has a higher impact factor.  But this can break down: if a startling paper is published in a low-quality journal it is cited by everyone who believes it to be true and everyone who claims it to be false, and suddenly the low quality journal has a high, but meaningless, impact factor!  (For some further information, check here and here.)

The next thing to remember is that peer review is not just the opinion of two reviewers. When a paper is published the true peer review starts:

In fact some have now suggested that this continued evaluation is much more important than the initial opinion of two reviewers.

More important than any one peer-reviewed paper is the preponderance of the results/evidence presented in many papers.  There are now many papers in peer-reviewed journals on the efficacy, safety, and environmental effects of GMO crops and food.  An overview of 10 years of genetically engineered crop safety (2003-2013) was published in 2013 by an Italian group using 1783 published studies.  “Our goal was to create a single document where interested people of all levels of expertise can get an overview on what has been done by scientists regarding GE crop safety,” said the lead researcher (as reported on the site listed below) “We tried to give a balanced view informing about what has been debated, the conclusions reached so far, and emerging issues.”  See references here and here. More than 400 papers (and growing) are listed by Biofortified in their Genera database.

A useful type of analysis that looks at the data in many papers is a meta-analysis.  For example, a recent (November 2014) meta-analysis was published in the respected on-line, refereed journal PLOS-one by two agricultural economists from the University of Gottingen in Germany who analyzed 147 papers from the peer-reviewed literature. They found that on average genetically engineered crops reduced chemical pesticide use by 37 percent, increased crop yields by 22 percent, and increased farmer profits by 68 percent.  Why only 147 papers out of 1800?  The reason is that the analysis was limited to certain subject matter and then only included if they met certain criteria as to quality.

In terms of safety of GMO food, in 2012 another group in England and France examined 12 long-term and 12 multigenerational GMO feeding studies, and concluded that the presented evidence showed “that GM plants are nutritionally equivalent to their non-GM counterparts and can be safely used in food and feed.”  (Unfortunately this is behind a pay wall at the journal but the abstract can be found here.) It is noteworthy that the public in Italy, Germany and France are not GMO-friendly, and yet those countries are the source of these studies!

In another huge data study of 100 billion food animals (yes, billion) it was concluded that there has been no change in the health of food animals after the introduction of GMO grain in feed as compared to prior to the advent of GMO crops.

Check on who is making statements in support or opposition to GMO crops.  GMO crops have been extensively examined by every major science and food safety authority in the U.S. and abroad, including the European Union, who have all declared them to be as safe as non-biotech crops of the same species, both for food and for the environment.  These authorities include the (United States) National Academy of Sciences, the American Association for the Advancement of Science, the American Medical Association, the (British) Royal Society and the European Food Safety Authority.

In 2010 the European Commission stated: “The main conclusion to be drawn from the efforts of more than 130 research projects, covering a period of more than 25 years of research, and involving more than 500 independent research groups, is that biotechnology, and in particular GMOs, are not per se more risky than e.g. conventional plant breeding technologies.”  Claims to the contrary come from fringe groups of scientists, not the main scientific establishment.  This is akin to the 3 percent of scientists who deny the existence of climate change.

So there you have it from a scientific perspective.

What are the disadvantages of GM foods?