Biotechnology as a Solution to Citrus Greening

Originally posted at Truth About Trade and Technology. 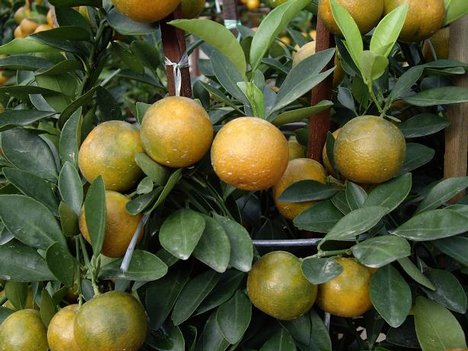 Since 2005 commercial Florida citrus growers have been battling a bacterial disease called citrus greening, also known by its Chinese name huanglongbing (HLB), translated as ‘yellow shoot disease’.  According to a task force report from the National Research Council (NRC) released in 2010, a worldwide review of existing cultivated citrus found little or no evidence of immunity for any variety.  A gene from the spinach plant is seen as a possible solution for the disease.

The disease was first detected in the early 1900s when it destroyed citrus trees in China by choking off the flow of nutrients.  The disease is transmitted by the Asian citrus psyllid, first detected in Florida in 1998, an insect that sucks the bacteria out of one tree and injects them into another as it feeds on the sap of leaves.  The citrus industry tripled pesticide applications in an attempt to kill the insects to stop or slow the spread of the disease, but eradication is not now considered a feasible option.

According to a recent article in the New York Times, the discovery of the disease led to an industry wide effort to find a control for the disease.  The NRC task force had recommended biotechnology as the most promising long-term approach to developing resistance to citrus greening.   Erik Mirkov, a Professor of Plant Virology at Texas A & M University, Weslaco, inserted a gene from spinach into orange trees.  The gene exists in slightly different forms in hundreds of plants and animals and produces a protein that attacks invading bacteria.  In testing by Southern Gardens Citrus, a commercial orange grower in south Florida owned by U.S. Sugar which has lost about 25 percent of its acreage to the disease and the financial supporter of Dr. Mirkov’s research, the trees have been resistant to citrus greening.

The spinach protein has already passed required EPA required tests on honeybees and mice.  When they were fed the highest doses of the protein required by EPA tests, it produced no ill effect.  In a few years when the young resistant trees have produced fruit, the FDA will compare their safety and nutritional content to conventional oranges.

Based on other biotech crops, the oranges are expected to the same as conventional oranges.  The National Academy of Science, the American Medical Association and the World Health Organization have concluded the technology is safe.  Animal feeding trials have shown that biotech crops are safe and over 3.5 billion acres of biotech crops have been grown worldwide since the technology was commercialized in 1996.

If the mature trees continue to be resistant to citrus greening and all USDA, EPA and FDA requirements are met, oranges will not be the first fruit that has benefited from biotechnology.   During the 1990s, papaya farmers in Hawaii almost lost the industry to the deadly ringspot virus that spread through the islands.  It became almost impossible to grow the fruit.  A scientist, Dennis Gonsalves, developed a way to make papayas resist the ringspot virus by inserting a piece of the virus’s own genes into papayas, effectively inoculating plants.  The industry has recovered and virtually all of the papayas grown in Hawaii are now biotech.  The International Service for the Acquisition of Agri-biotech Applications estimates that 5,000 acres of ringspot resistant papaya are grown in U.S. each year and 15,000 acres in China.

Exports of papayas to Asia are growing and the industry is even trying to build a market among Japanese consumers.  The Japanese government gave approval for imports in 2011.

This effort for juice oranges in Florida has major implications for trade.  Brazil has had the Asian citrus psyllid since at least 1942 and citrus greening at least since 2004.  It is now spread throughout the country.  Growers have achieved some control by abandoning infected groves to plant elsewhere in the country.  Planting orange trees with resistance to citrus greening would be a much more effective control method.  As noted earlier, 90 percent of Brazil’s orange juice moves in international markets.  Almost every region of the world that produces citrus has losses from citrus greening.  If the U.S. industry is successful in developing the biotech orange, it will spread across the globe.

Biotech regulators at USDA, EPA and FDA should begin preparing now for a science-based decision on biotech oranges.  While there is plenty of evidence from other crops about the safety of the technology, each crop is judged on the research information provided.  The decision will affect an entire industry and billions of consumers that depend on citrus products as part of a healthy diet.