Where are GMOs banned?

how many countries ban GMOs?

Cathy Enright, former executive director of the Council for Biotechnology Information, has provided a response to a similar question. Below is a previously posted response that addresses the topics your question raises, such as what countries have banned GMOs, for example.

“There are hardly any countries that have banned GMOs, in fact, I’m aware of only one country banning GMO. This country is Kenya which has a ban in place on GMO food imports. The decision came about in November 2012, apparently during a cabinet meeting, that circumvented the existing Kenyan Biosafety Act and the National Biosafety Authority, the regulatory agency established to regulate the use of GMOs.

“Every other country that has a regulatory system in place for GMOs allows GMOs to be imported for food and animal feed, including the European Union (EU), which has a thorough and comprehensive regulatory system for the assessment and approval of GMOs (EU law).

“In fact, the EU’s safety assessment process for GMOs is largely similar to that of other countries around the world — Japan, China, Brazil, Korea, Australia, New Zealand, Canada, the United States and many, many others. Each has determined that GMOs are substantially equivalent to their non-GMO counterparts.

“I think people may incorrectly perceive that the EU has a ban on GMOs for food and animal feed because of polarized public opinion and extended delays in the EU approval process, particularly the final step — a political decision-making process in which the member states vote on the European Food Safety Authority (ESFA) scientific opinion. By mid-2011, 39 GM products were approved for food and feed use in the EU, with 72 approvals pending due to delays in the regulatory process.

“Despite the GMO controversy in the EU, it imports 72% (2011) of the protein-rich feed needed to support its livestock industry from Brazil, Argentina and the United States, the vast majority of which is GMO.

“The EU has approved just two GMO crops for cultivation: a GMO corn that is resistant to a devastating pest, the European corn borer, and a potato that contains only one of the two starches traditionally found in potatoes (amylopectin) that is desired for industrial use, such as in papermaking. Eight EU member states (France, Germany, Poland, Italy, Luxemburg, Austria, Hungary and Greece) have banned an insect-resistant corn variety citing environmental concerns, despite an EFSA determination in 2012 that said the bans were not justified. These are political bans that conflict with the scientific advice of its central EU government. Spain and Portugal continue to grow the insect-resistant corn on a commercial scale. Germany, Sweden and the Czech Republic grow the amylopectin potato.

“In contrast with the EU, Japan has a functioning, science-based regulatory process for GM products, reviewing and approving GMOs within fairly predictable time frames. By mid-2011, Japan had approved 130 GMO products for food use and the 95 crops for which environmental release (including cultivation) had been sought.” 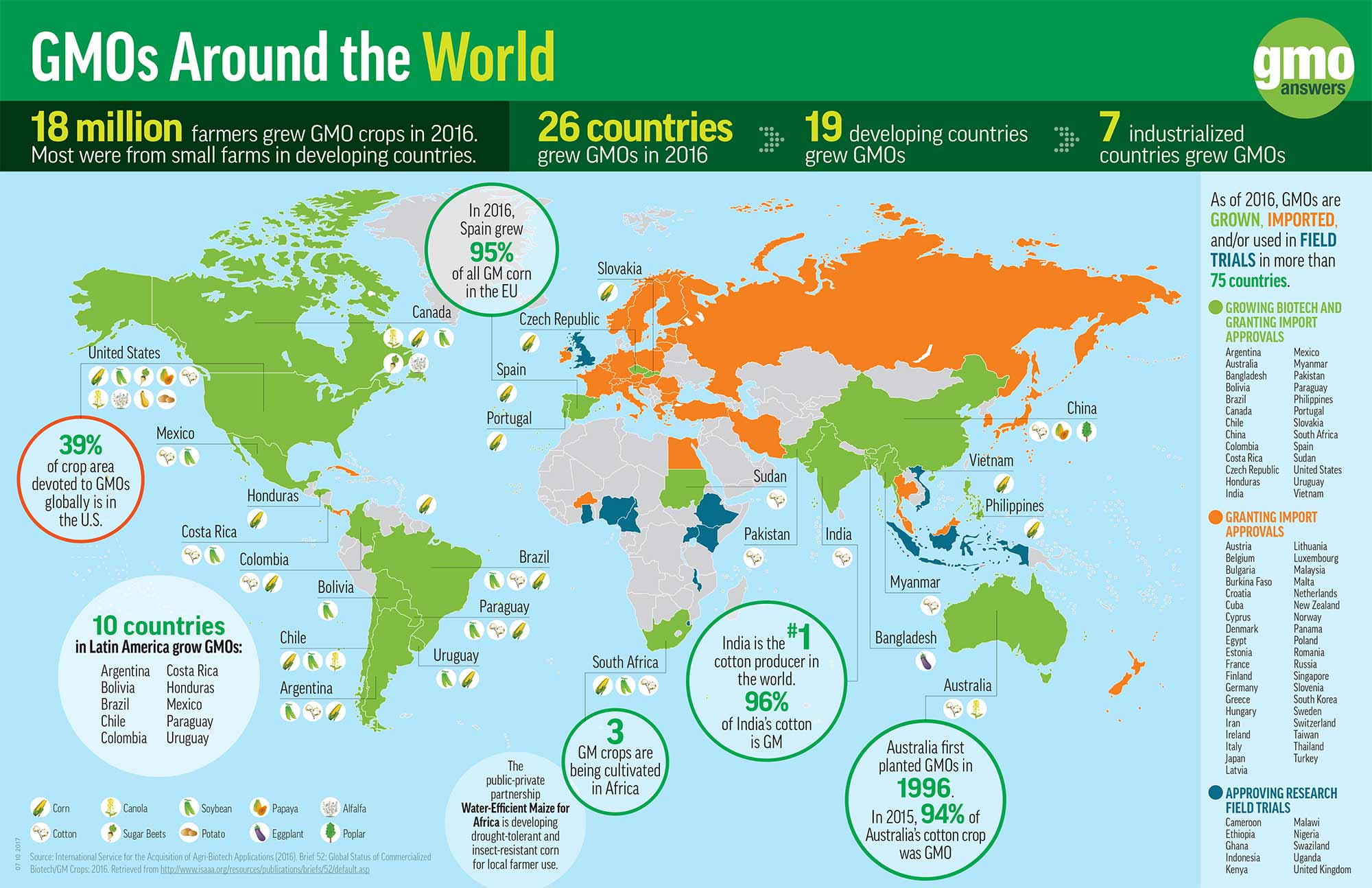 Here is a list of all the countries that have banned the cultivation of GMOs, but still allow GMO imports:

Here is a list of countries that have banned both GMO imports and GMO cultivation:

I hope the above answers your question about countries that banned GMOs. You can also check out our website for additional information on global adoption of GM crops.

Are GMOs harmful to human ? Is it just another commercially driven argument, like the red…

Can you show me the proof there isn’t a trace of epicyte in Monsanto corn? If there you…

When you create a plant that is herbicide resistant, are there actually pesticides in the…