Can you describe in detail the process by which genes are altered in foods?

GMO Basics How GMOs Are Made

In the wild, the transfer of genes within and across species is fairly common, either through traditional reproduction (breeding) or through non-traditional means.  Viruses and bacteria do this all the time, as do plants and animals. Human DNA, for instance, is full of viral genes.

When humans began to farm between 10 and 20 thousand years ago, they took the seeds from their best edible wild plants and sowed them to create crops. Early farmers selected the most desirable plants to provide seeds for the next year’s crop. They looked for faster growth; higher yields; larger seeds; tastier fruit; bigger plants; resistance to insects, other pests, and disease; and other desirable traits. One of the most important traits was that the plants didn’t make them sick. Eventually they learned that plants within the same species, and, in the 1700s, across different species, could be artificially mated or cross-pollinated to improve the characteristics of the plant. These farmers knew nothing of genes, of course, but were actually altering the genetic makeup of the plants. By creating better plants through selective breeding, they were practicing genetic modification—changing a genome through human intervention.

In the 20th century, scientists began to experiment with a new, different form of breeding in corn, called hybridization.  This involves developing an “inbred” line of corn (a genetically “pure” line where desired characteristics breed true in every subsequent generation) and then combining (“crossing”) it with another pure line to create an even better and more vigorous line.  Hybrids came to dominate the corn market, and the technique was applied to other crops as well.  In the United States, 95 percent of the corn acreage is planted with hybrid corn, enabling us to produce six times more corn on three percent fewer acres than we did 80 years ago.

Hybrids were great for the seed industry.  Because they owned the parental inbred lines, only they could produce a specific hybrid, meaning that farmers would return annually for the improved seeds.

In the 1940s, scientists also learned that they could alter the genetic makeup of plants by exposing them to chemicals, X-rays and other forms of radiation, and then select the plants that expressed the traits that were being sought.  This is called “mutation breeding” and has created many varieties of important crops.

These techniques and many others are called “traditional or conventional breeding,” and there is a high degree of uncertainty and unpredictability associated with these types of genetic modification, as large amounts of genetic material are exchanged when two organisms’ genomes are crossed or, in the case of mutagenesis, genetic changes are created randomly. Mobile DNA found in every plant and animal also is mixed.  These transposable elements jump in and out of genomes, remodeling the genome continuously.

The process of genetic engineering is a more precise method of genetic modification. Only one gene, or maybe a few genes, are needed to achieve the desired trait and are transferred from one organism to another.  The difference between traditional breeding and genetic engineering is illustrated in the picture below, from the U.S. Food and Drug Administration.  In popular culture, genetic engineering has become synonymous with genetic modification, and an organism that has been genetically engineered is often referred to as a genetically modified organism, or GMO.  The technical term is "transgenic."

For more than 40 years, scientists have been able to cut DNA and paste it into a new context. Transgenic plants rely on scientists identifying and amplifying the gene of interest and then inserting it into Agrobacterium, a bacterial species that makes natural genetic exchanges with plants.  Scientists have disarmed Agrobacterium to work for them.  The lab strains of Agrobacterium (usually referred to as simply “Agro”) can deposit DNA into a plant cell.  Scientists place the gene of interest into Agro and incubate it with plant tissues.  Agro places the DNA into one cell, and then it is integrated into the genome.  The one cell can be placed into media where it will divide into a clump called a callus, a blob of generic cells.

Plant cells make decisions based on plant hormones.  Placing a callus on various hormone combinations causes the callus to produce organized cellular structures that eventually emerge as new organs or embryos that later emerge into a whole plant.  If that foundational cell has your gene in it, it will be present in every cell of the new plant.

This is the process in a short form.  In any lab, it is reasonably simple for most species.  Today, most labs don’t even bother.  Instead, they contract the work out to one of several companies or university services that make the transgenic for you.  Basically, you can get your favorite gene installed in most ag crops pretty easily.  From there, the gene might instruct the plant to do something it never did, produce more of a product that is naturally there or even turn a gene off.  All of these are valuable outcomes of the process. 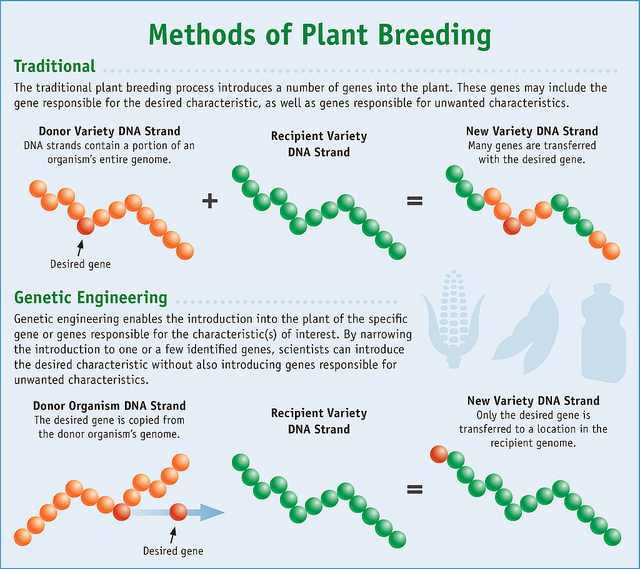