Answers to the Top 10 Questions About GMOs

The following are the Top 10 consumer questions and answers have about GMOs, based on Internet searches, traffic to the GMO Answers website, and in-person events.

1. Do GMOs Cause Cancer? 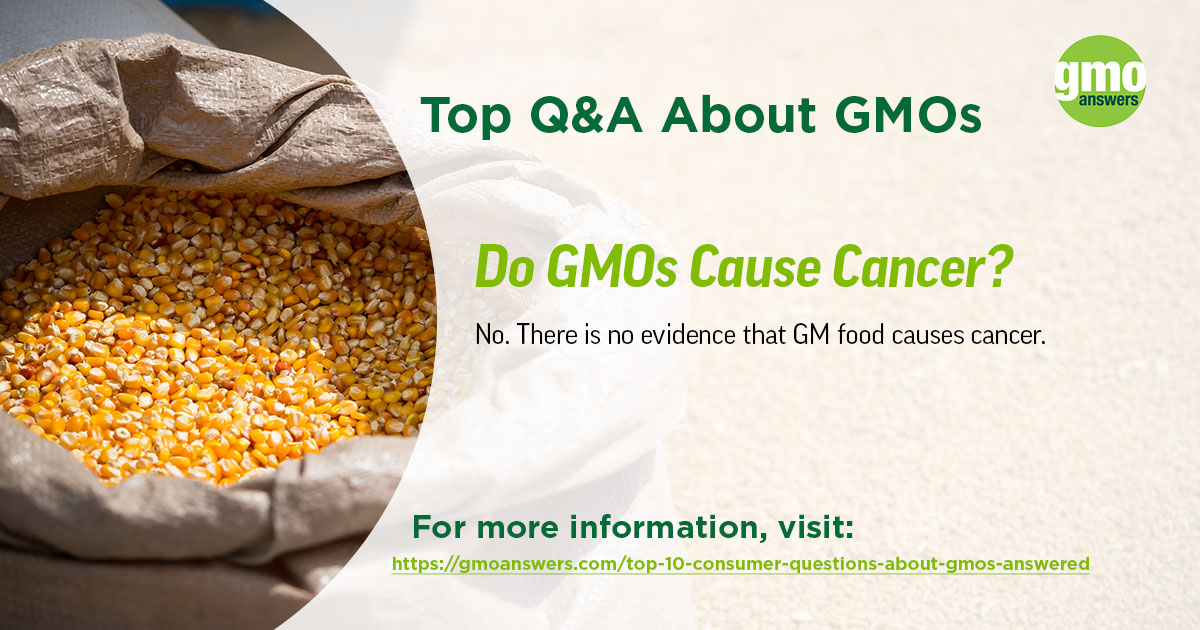 No. There is no evidence that GM food causes cancer.

Dr. Kevin Folta from the University of Florida states it simply.

"The short answer is no, there is absolutely zero reputable evidence that GMO foods cause cancer."

This is an important question. Numerous questions like this and related topics have been submitted to GMO Answers, including questions about reports claiming that glyphosate causes breast cancer and about a Séralini study (now retracted) claiming GMOs caused cancer in rats, among others.

We know that consumers have concerns, so we reached out to Dr. Kevin Folta, University of Florida interim chairman and associate professor, horticultural sciences department, for an answer. "The short answer is no, there is absolutely zero reputable evidence that GMO foods cause cancer," he writes. You can read Kevin Folta's full response to the question "Do GMOs cause cancer?" here.

Additionally, the health and safety of GMOs have been validated by many independent scientists and organizations around the world. For example, there are nearly 1,800 global studies about the health and safety of GMOs, and a decade of GMO research, funded by the European Union, which finds that GMOs pose no greater risk than their conventional counterparts. This report can be found here.

In addition to Dr. Folta’s response, this study reviews seven cohort studies and 14 case studies and finds that there is "no consistent pattern of positive associations indicating a causal relationship between total cancer (in adults or children) or any site-specific cancer and exposure to glyphosate."

There are also multiple resources that explore this topic on GMO Answers:

2. Are GMOs Safe For Human Consumption? 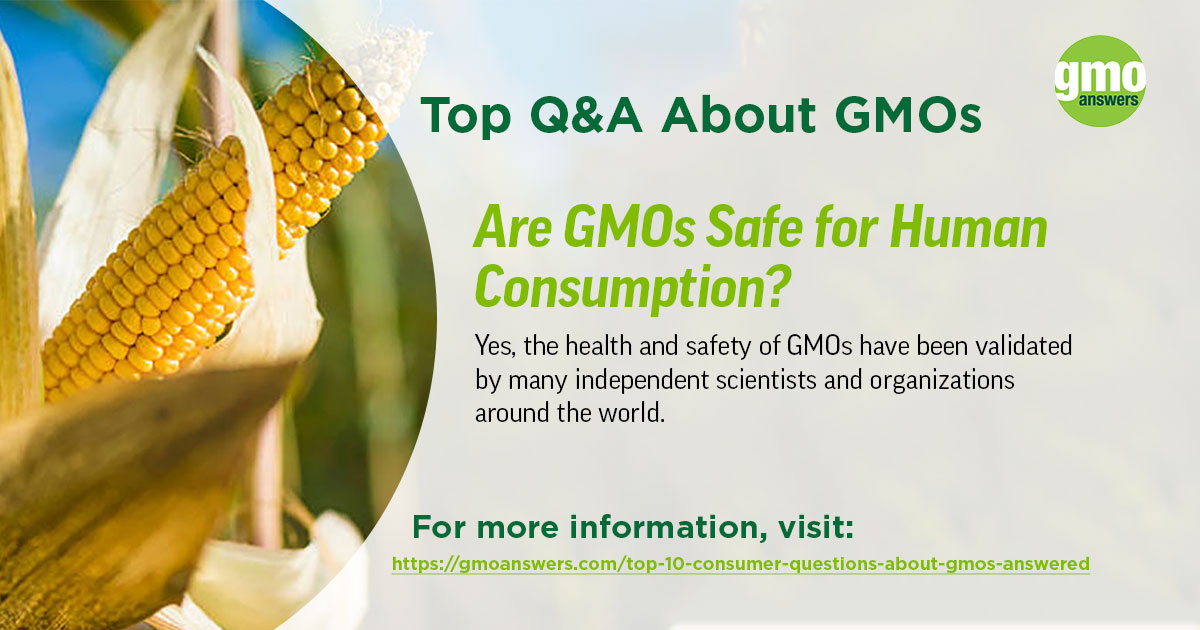 Yes, the health and safety of GMOs have been validated by many independent scientists and organizations around the world. "There is no substantiated case of any adverse impact on human health, animal health or environmental health, so that’s pretty robust evidence, and I would be confident in saying that there is no more risk in eating GMO food than eating conventionally farmed food," the European Commission’s Chief Scientific Advisor Anne Glover told EURACTIV in a media interview.

The U.S. National Academies of Science, Engineering, and Medicine (NAS) researched this very same question and concluded that GMOs are safe. After reviewing all available research studies on health effects from GE crops, the study found "no substantiated evidence of a difference in risks to human health between current commercially available genetically engineered crops and conventionally bred crops."[1] More than 20 scientists, researchers, agricultural, and industry experts reviewed over 20 years of data since GMOs were introduced, including nearly 900 studies and publications, animal studies, allergenicity testing, and North American and European health data.

The health and safety of GMOs have been validated by many independent scientists and organizations around the world. Groups ranging from the World Health Organization (WHO), the Royal Society of Medicine - UK, the European Food Safety Authority (EFSA), and the International Seed Federation (ISF), along with various governing bodies on every continent around the world have all affirmed the safety of GMO crops.

Since 1992, more than 40 government agencies have given approvals for GMO food, feed, and cultivation. In many countries, multiple agencies are involved in the regulation of GMOs. 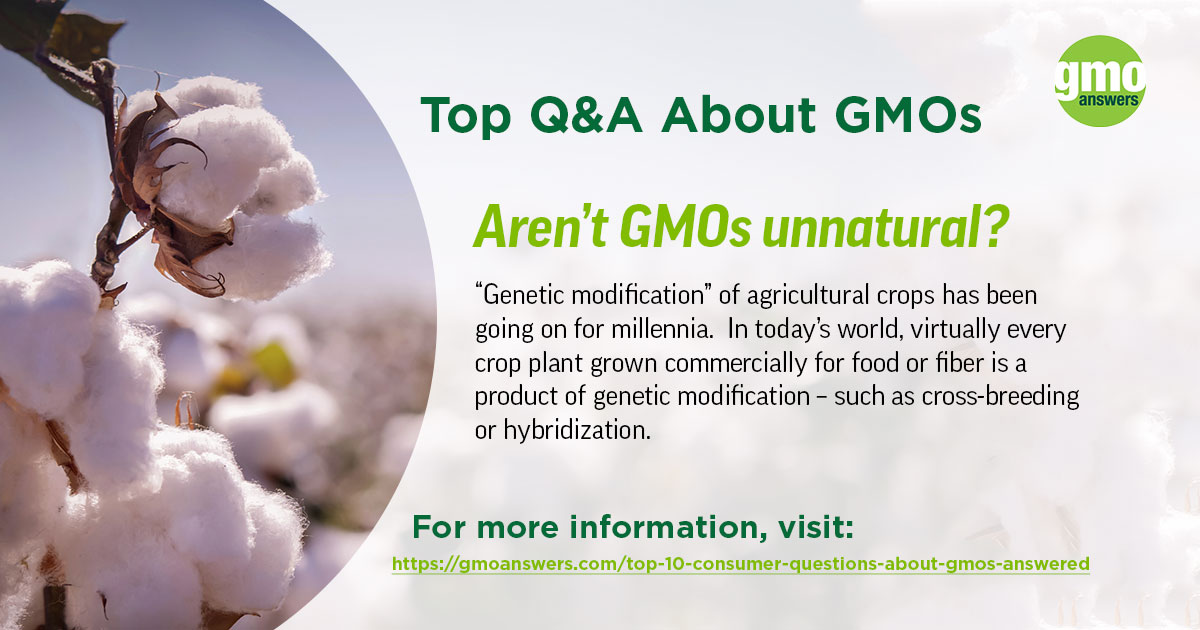 "Genetic modification" of agricultural crops has been going on for millennia. In today’s world, virtually every crop plant grown commercially for food or fiber is a product of genetic modification – such as cross-breeding or hybridization. Traditional breeding methods include selecting and sowing the seeds from the strongest, most desirable plants to produce the next generation of crops. By selecting and breeding plants with characteristics such as higher yield, resistance to pests and hardiness, early farmers dramatically changed the genetic make-up of crop plants long before the science of genetics was understood. As a result, most of today’s crop plants bear little resemblance to their wild ancestors.

Biotech research is just one of the latest tools available to farmers who want better plants, and in certain ways, biotech is an improvement over older methods of cross-breeding. It’s much more precise, based upon scientific knowledge of plants and genetics, so we have far greater control and understanding of the exact improvements we want to achieve. Biotech crops are also studied by scientists and regulatory agencies to a far greater extent than any other kind of crop, including conventional and organic, which means biotech foods are considered to be as safe, if not safer, than their conventional counterparts.

4. Do GMOs Have an Impact on the Environment? 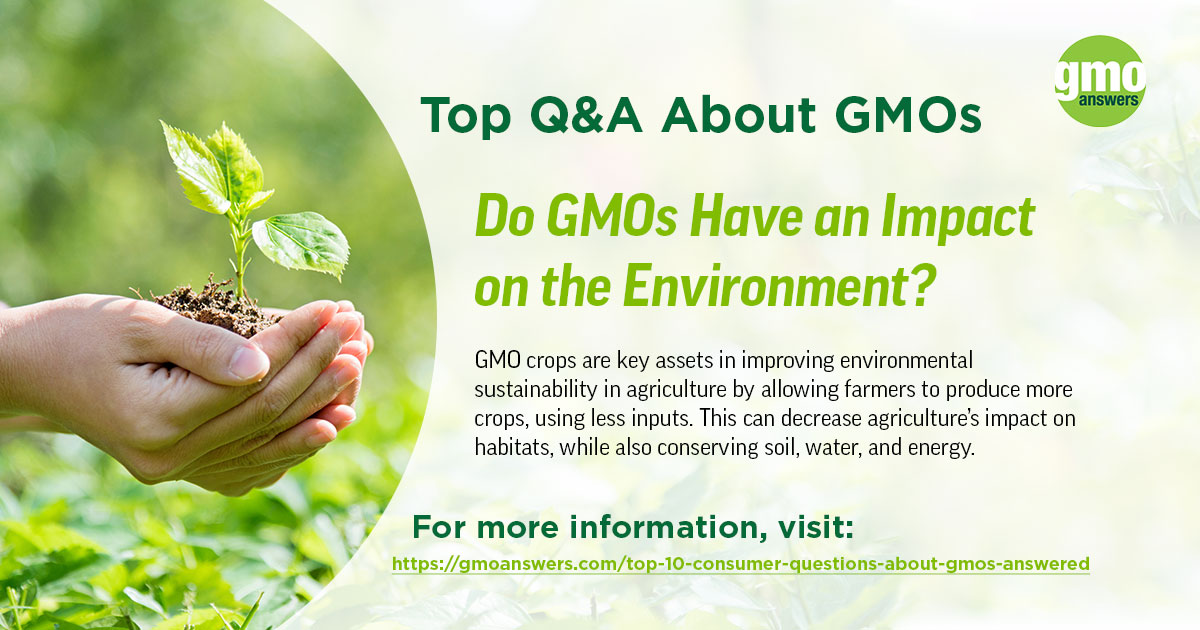 Biotech crops are key assets in improving environmental sustainability in agriculture by allowing farmers to produce more crops, using less inputs. This can decrease agriculture’s impact on habitats, while also conserving soil, water, and energy. In agriculture, GMOs are one tool that allows farmers to take care of our land and environment while harvesting more and using fewer of these precious resources.

The use of GMOs in agriculture can: preserve biodiversity by sparing lands not intensely cultivated; increase productivity; reduce soil erosion; conserve water and may lead to fewer pesticide applications.

5. Have Long-Term Health Studies Been Conducted on GMO Crops? 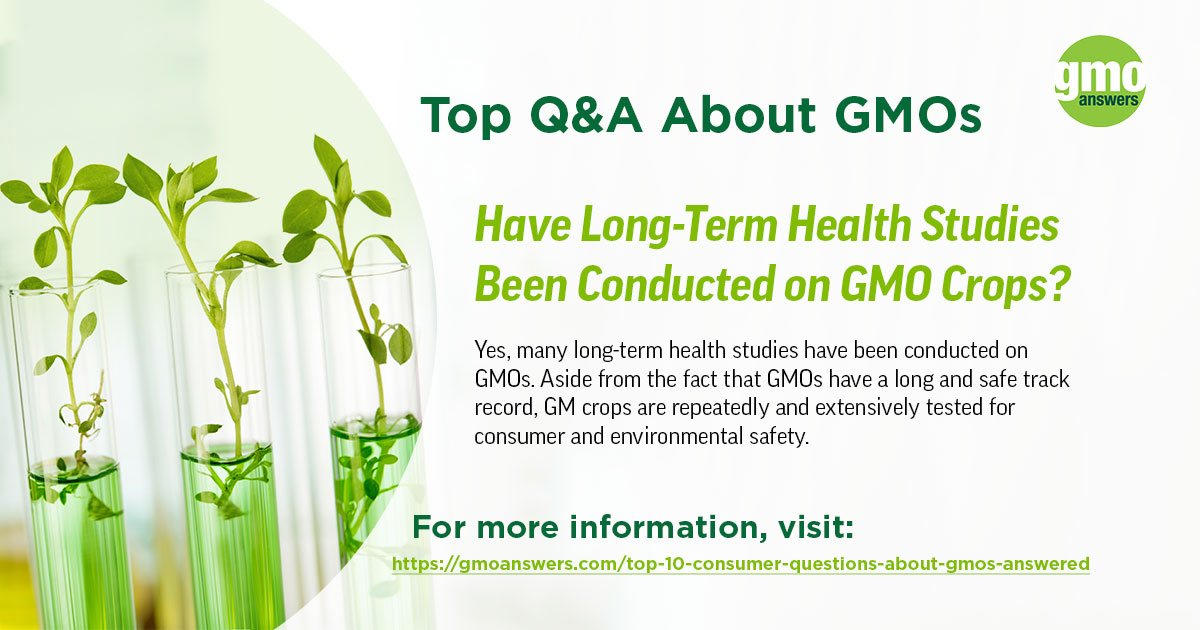 Yes, many long-term health studies have been conducted on GMOs.[2] Aside from the fact that GMOs have a long and safe track record, GM crops are repeatedly and extensively tested for consumer and environmental safety, and those tests are reviewed by government agencies around the world. Since 1992, more than 40 government agencies have given approvals for GMO food, feed, and cultivation. In many countries, multiple agencies are involved in the regulation of GMOs.

The health and safety of GMOs have also been validated by many independent scientists and organizations around the world. Groups ranging from the World Health Organization (WHO), the Royal Society of Medicine - UK, the European Food Safety Authority (EFSA), and the International Seed Federation (ISF), along with various governing bodies on every continent around the world have all affirmed the safety of GMO crops.

The European Commission states, "the main conclusion, after more than 130 research projects covering a period of more than 25 years of research and involving more than 500 independent research groups, is that biotechnology, in particular GMOs, are not per se more risky than, e.g., conventional plant breeding technologies."[3]

[3] A Decade of EU-Funded GMO Research (2001-2010). Retrieved from https://ec.europa.eu/research/biosociety/pdf/a_decade_of_eu-funded_gmo_research.PDF

6. Do GMOs Have an Impact on Allergies? 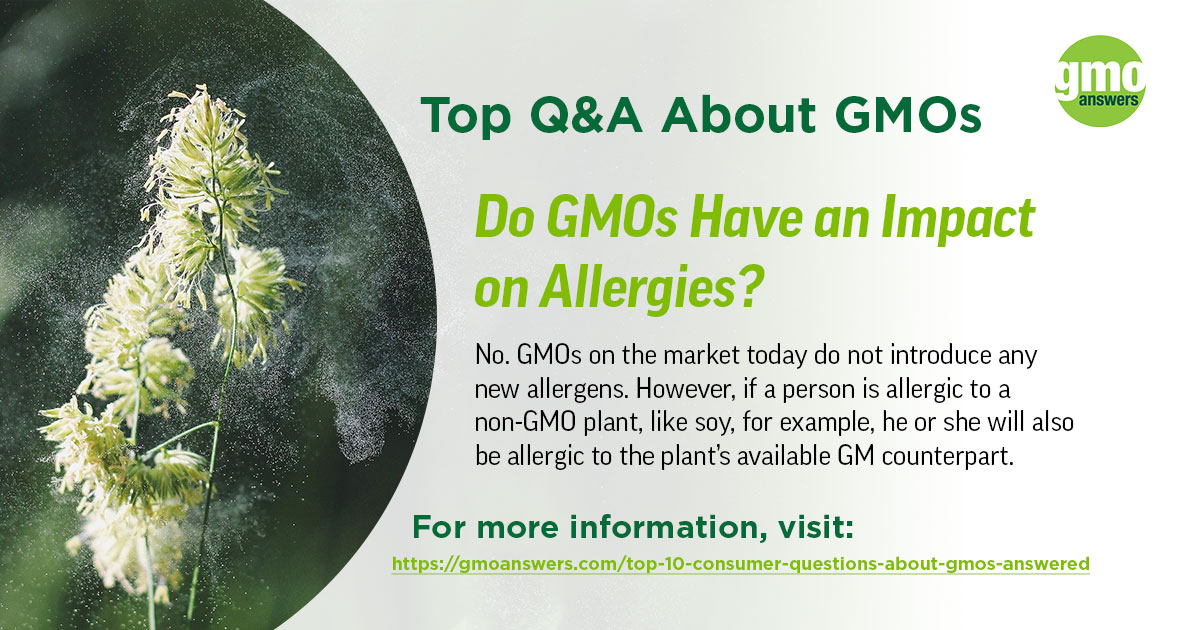 No. GMOs on the market today do not introduce any new allergens.

Lisa Katic, R.D., answered this question by explaining, "No commercially available crops contain allergens that have been created by genetically engineering a seed/plant. And the rigorous testing process ensures that will never happen." If a person is allergic to a non-GMO plant, like soy, for example, he or she will also be allergic to the plant’s available GM counterpart.

7. If Livestock Eat Genetically Modified Grain, Will There Be GMOs in My Meat? 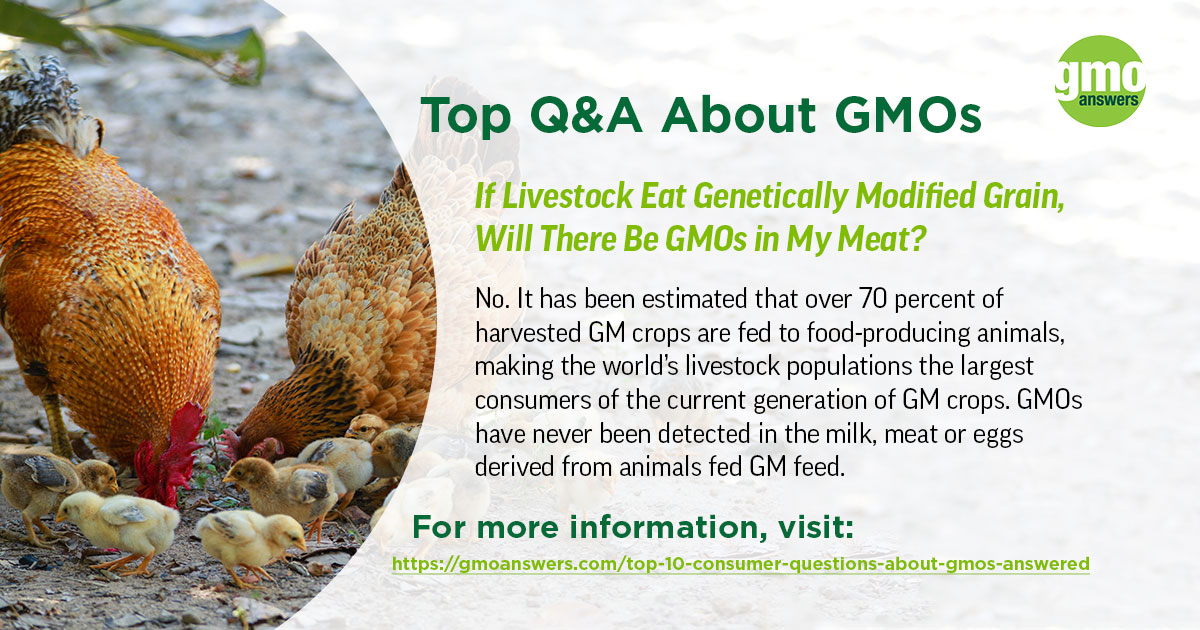 No. It has been estimated that over 70 percent of harvested GM crops are fed to food-producing animals,[4] making the world’s livestock populations the largest consumers of the current generation of GM crops. GMOs have never been detected in the milk, meat or eggs derived from animals fed GM feed.[5] 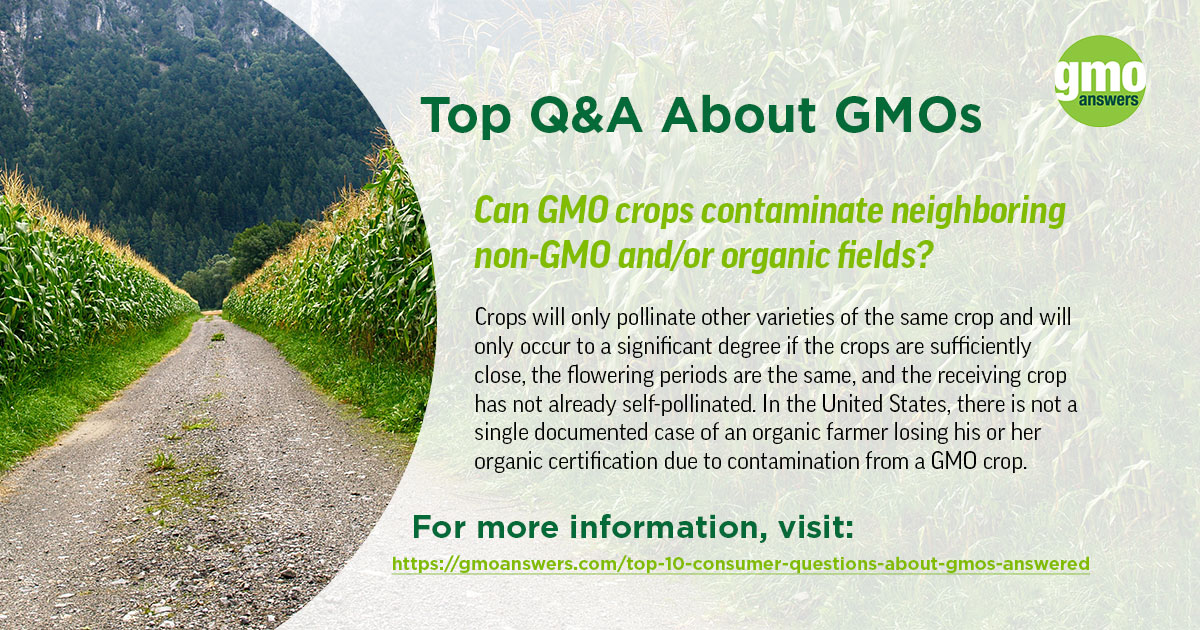 Co-existence in agriculture is not new, nor unique to GMO crops; it is the practice of growing crops different quality characteristics of intended for different markets in the same vicinity without becoming commingled and possibly compromising the economic value of both. Farmers have a long history of cooperating with their neighbors to isolate crops from adjacent fields for the purpose of producing high-value crops under identity-preserved systems.

Crops will only pollinate other varieties of the same crop and will only occur to a significant degree if the crops are sufficiently close, the flowering periods are the same, and the receiving crop has not already self-pollinated. In the United States, there is not a single documented case of an organic farmer losing his or her organic certification due to contamination from a GMO crop.

9. Do Seed Companies Have an Influence on Whether or Not Farmers Grow GMOs?

No. Brian Scott, an Indiana farmer who grows corn and soybeans among other crops, answers this question simply, "I choose what seeds I plant every year. I’m not locked into buying seed from one company from one season to the next."

"There is no one perfect solution to solving our global challenges. Therefore, governments, farmers, scientists, non-governmental organizations and all stakeholders in the space of developing sustainable solutions to agriculture should be open minded and accommodative to using the many tools that are available including the use of biotech crops. At the end, it will take a broad array of solutions to eradicate hunger, feed our rapidly expanding population, and tackle the many challenges that come with a changing climate and biotech crops have proven that they can be part of the solution."

10. Do GMO Crops Have an Impact on Bees or Butterflies? 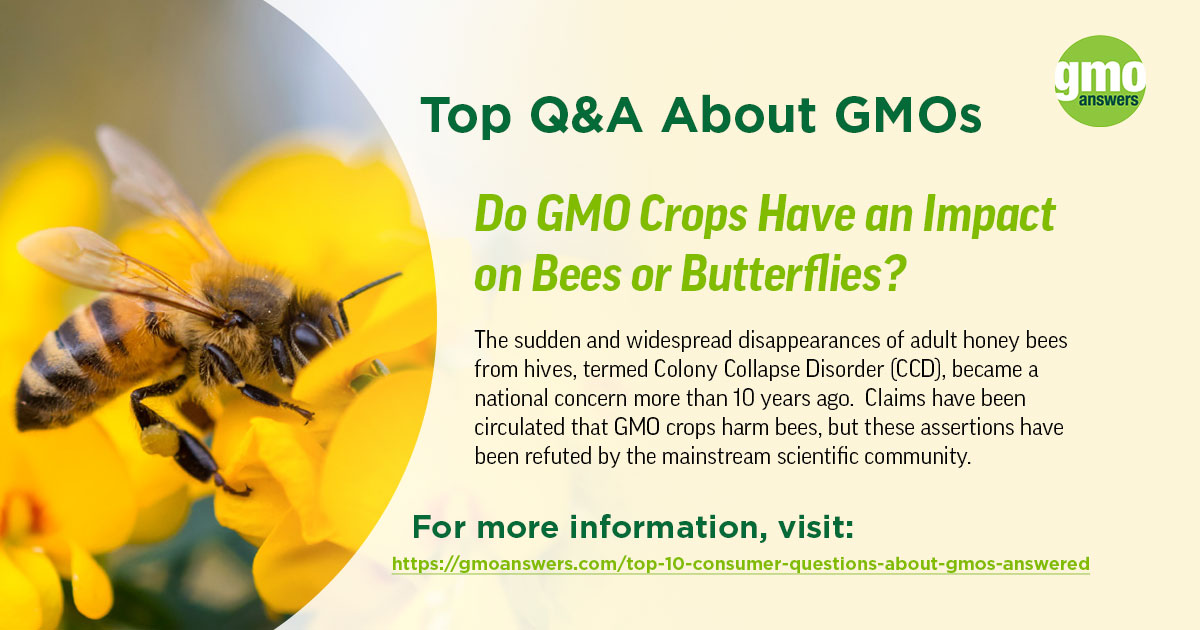 The sudden and widespread disappearances of adult honey bees from hives, termed Colony Collapse Disorder (CCD), became a national concern more than 10 years ago.[6] Claims have been circulated that insect protected GM crops harm bees, but these assertions have been refuted by the mainstream scientific community.

If a variety of factors are impacting bee health, could GMOs be one of them? Bee Ambassador for Bayer Chris Sansone, who has more than 30 years of experience as a professor and extension specialist at Texas A&M University, points to several scientific studies indicating this is not the case.

He notes that "genetically modified plants and their impact on honey bees have been widely studied, and the results indicate that GM plants are not harmful to bees."

[6] Report on the National Stakeholders Conference on Honey Bee Health. Retrieved from http://www.usda.gov/documents/ReportHoneyBeeHealth.pdf.