Do GMOs Cause Cancer?

No. There is no evidence that GMOs cause cancer.

This is an extremely important question.  Many questions on this subject have been submitted to GMO Answers, including questions about reports claiming that glyphosate, the herbicide that Roundup Ready GMO crops can tolerate, causes breast cancer and about a Séralini study (now retracted) claiming GMOs caused cancer in rats, among others.

Cancer is a scary and complex group of diseases with many possible causes, but GMOs are not one of them. In fact, future GMO plants may even play a role in prevention through traits engineered to produce nutrients that help fight cancer or eliminate naturally occurring compounds that increase cancer risk.

Dr. Kevin Folta from the University of Florida states it simply:

“The short answer is no, there is absolutely zero reputable evidence that GMO foods cause cancer.

Cancer is a name applied to a spectrum of diseases where cells proliferate abnormally. There is no way that the subtle and well-understood alterations of a plant’s genes can cause cancer. There is nothing about the Bt protein (used in insect resistance, also in organic pest control), the EPSPS enzyme (which confers herbicide resistance simply by substituting for the native enzyme in the plant) or the process itself that would induce such cellular changes in human cells that would lead to cancer.  It is just not plausible.

Some of the confusion comes from reports where the Bt protein or glyphosate (the herbicide used on some GM crops) is applied to cell lines in a petri dish, and the cells show changes associated with stress and perhaps abnormal proliferation.  However, cells in a dish do not behave like cells in the body.  Through years of careful evaluation, there is no reliable evidence that GM foods cause the same changes in a living organism.

Quite to the contrary, future plants may be engineered to produce nutrients that fight/prevent cancer or even eliminate compounds that increase cancer risk. One such product is close to commercialization.  Potatoes produce a small amount of acrylamide, a potential carcinogen, when heated to high temperatures.  A potato has been engineered not to produce that compound, and that leads to safer food.”

Part of the reason there are so many questions about GMO crops and the herbicides they are bred to tolerate, is that many people don’t know about the extensive health and safety testing GMOs undergo.  A prime example is the comparative safety assessment process used to evaluate differences between newly developed GMO crops and their conventional counterparts.  This assessment helps to fully understand the implications of genetic modification on DNA, RNA and resulting proteins and plant composition.  This process is used in all international crop biotechnology guidelines and every single GMO product goes through this assessment.

In the spring of 2016, The National Academies of Science, Engineering and Medicine (NAS) issued a comprehensive report where a panel of more than 20 scientists, researchers, agricultural and industry experts reviewed over 20 years of data since GMOs were introduced, including nearly 900 studies and tests and European and North American health data.  They concluded – as other previous research concluded – that genetically modified crops are safe to eat, have the same nutrition and composition as non-genetically modified crops, and have no links to diseases. 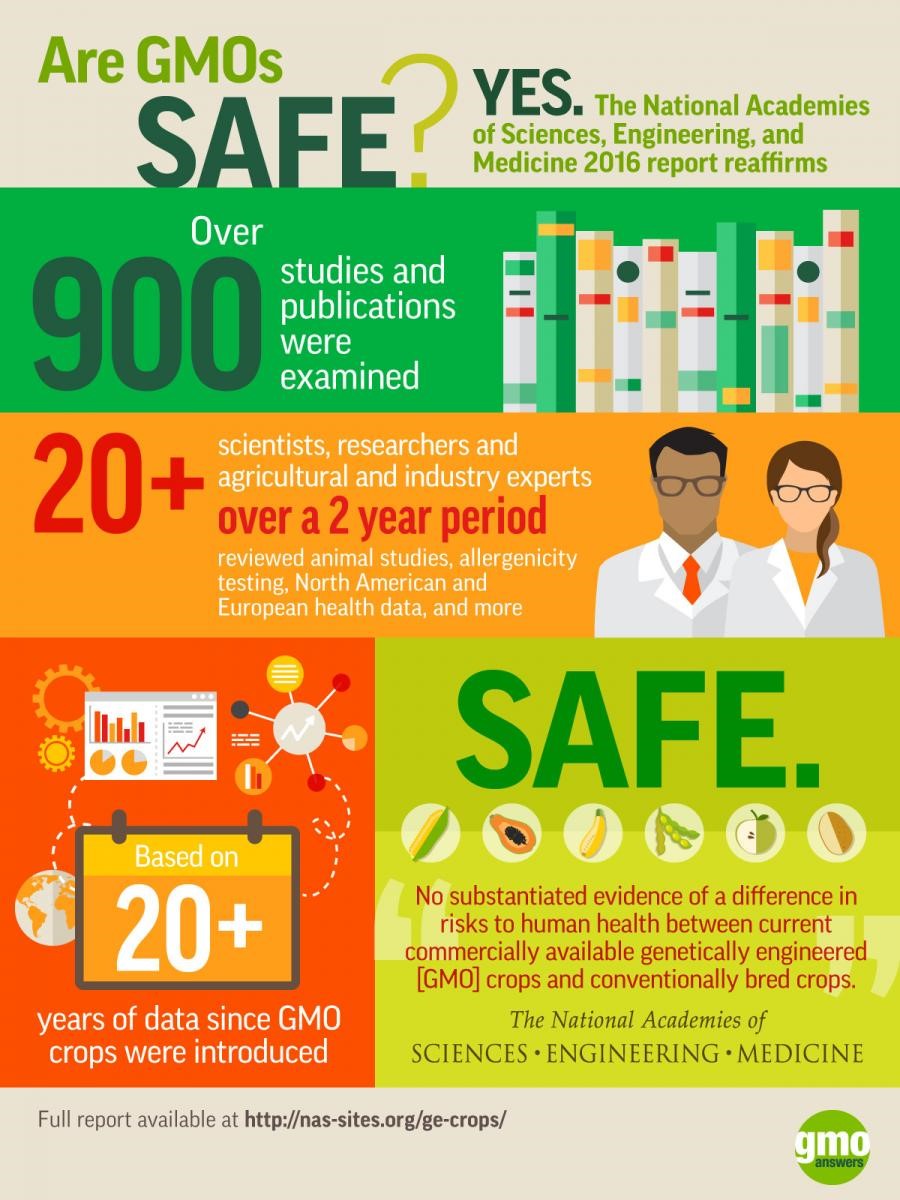