How do farmers prevent glyphosate from entering drinking water?

How do farmers prevent glyphosate from entering drinking water?

There are two ways in which pesticides can enter into ground and surface water—either directly, called point source, or indirectly, called nonpoint source. I spent a good portion of my career in agriculture in the field working with famers, talking about pesticide best management practices to help eliminate direct entry and minimize indirect entry of pesticides into sources of drinking water.

Here are a few examples of common practices farmers use to avoid both routes of entry:

Examples of Practices Use to Avoid Direct Entry

Monsanto, in partnership with several major agricultural retailers and conservation groups, had a program in the 1990s called Operation Green Stripe that provided financial incentives to Future Farmers of America (FFA) chapters to go out and recruit local farmers in the communities where they lived to plant a drainage area on their field to a vegetative buffer strip to protect surface waters from pesticide runoff and to conserve water and topsoil (see first photo). The next time you’re driving in a rural farm community on a Sunday afternoon, look for examples of land planted to these buffer strips. You can’t miss them; they are obvious any time of the year. Also look for examples of conservation tillage during months when crops are not growing or not yet fully grown (see next two photos). You’ll see the corn stalks and stubble of the previous year’s crop still lying in the field.

Farmers who work the land also live on the land. They are not just protecting drinking water for the people living in the cities; they are protecting the water that their families drink and preserving the land they work.

This is a photo of a vegetative filter strip protecting the stream on the right from a tilled field on the left. 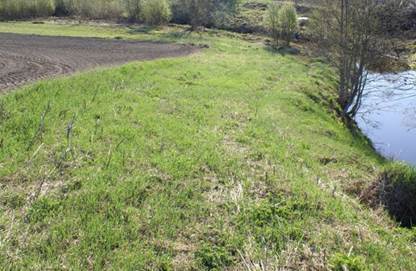 These are photos of conservation tillage, where a crop has been planted directly into the stubble of the previous year’s crop without having to disrupt the soil with heavy tillage. 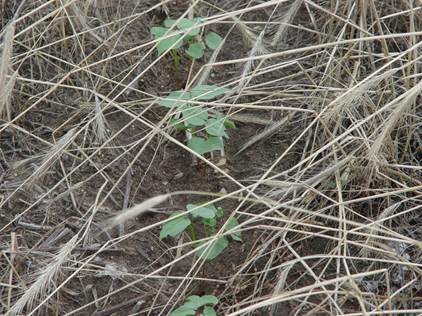 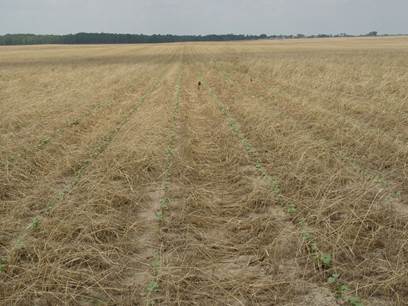